In July, 2021, the North American Monsoon was much more active than in 2020, when it was nearly non-exixtent. This includes the Pagosa Springs area, where at our house we received 2.65 inches of rain for the month, which is about .85" above the average for the Pagosa Springs area in July. A couple of the storms also produced hail, including an intense barrage of wind-driven rain and up to dime-sized hail as I was trying to get out of the grocery store and home with the groceries on July 21 - no pictures of that one, as I was more focused on trying to get the groceries into the car and home and getting out of my soaked clothes. Not all of the monsoon rain came with photogenic storms or great lightning displays, but there were definitely some photo ops, especially toward the end of the nonth. Here are some pictures, as well as one short video clip:

Using the Lightning Trigger, I caught a couple simultaneous bolts, or perhaps some branching from a bolt partly hidden by the cloud, from a storm that was just to the southwest of Pagosa Springs. Also a little branching going on in the right bolt. 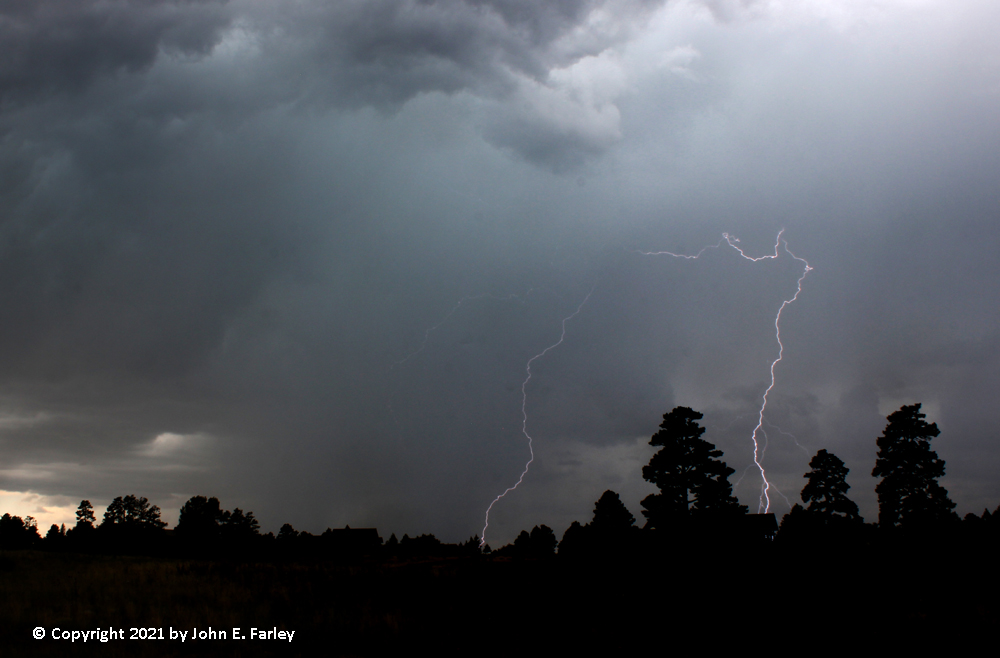 One of the more active storm days was July 29. On this day, there was somewhat more wind shear than had been present on earlier days, with fairly strong upper winds from the south or SSE, while surface winds were weaker and more easterly. This created a fair amount of speed shear and some directional shaear, allowing storm updrafts to sustain themselves and in some cases rotate, as the anvil and precipitation were carried away to the north of the storms, which in general were moving to the northwest. One storm that developed just south or southwest of Pagosa Springs developed a wall cloud that was sustained for at least 20-30 minutes as the storm drifted slowly to the northwest, with very clear rotation at times. I did not at first realize this was occuring as I initially positioned myself at Veterans Memorial Park hoping to catch some lightning in the storm's core just to my northeast. But several lightning strikes less than a mile away quickly told me that location was not a safe place to do lightning photography. These strikes were coming out of the storm's main updraft, which was right overhead and to the south or southwest of the main precipitation area. So I moved about five miles west to the Aspen Springs area, where I was greeted with this view: 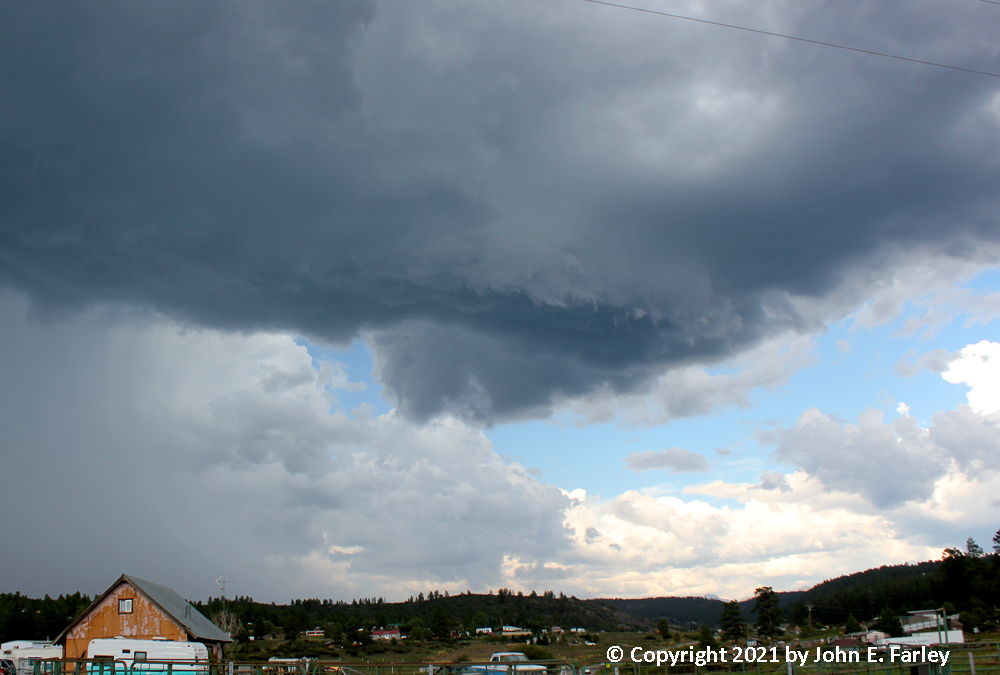 This wall cloud had formed right under the main updraft while I was moving away from the lightning strikes, or maybe it had already been overhead and I had not noticed it. In any case, it was displaying very clear dloud-base rotation, as can be seen in this short 4x video timelapse:

This is a brief, 4x timelapse video of cloud-base rotation in a storm on July 9, taken from nearby Aspen Springs looking northeast. You can clearly see the rotation in the cloud base - the part of the cloud that is closest is moving to the right (south) while the more lowered part on the far side of the cloud is moving the opposite direction. This was right under the main updraft of the storm, and the lowered area under the updraft persisted for at least 20-30 minutes, showing visible rotation at times.

After the storm moved on a little farther to the northwest, I returned to Veterans Memorial Park, where I got more pictures, now looking west-northwest at the storm. 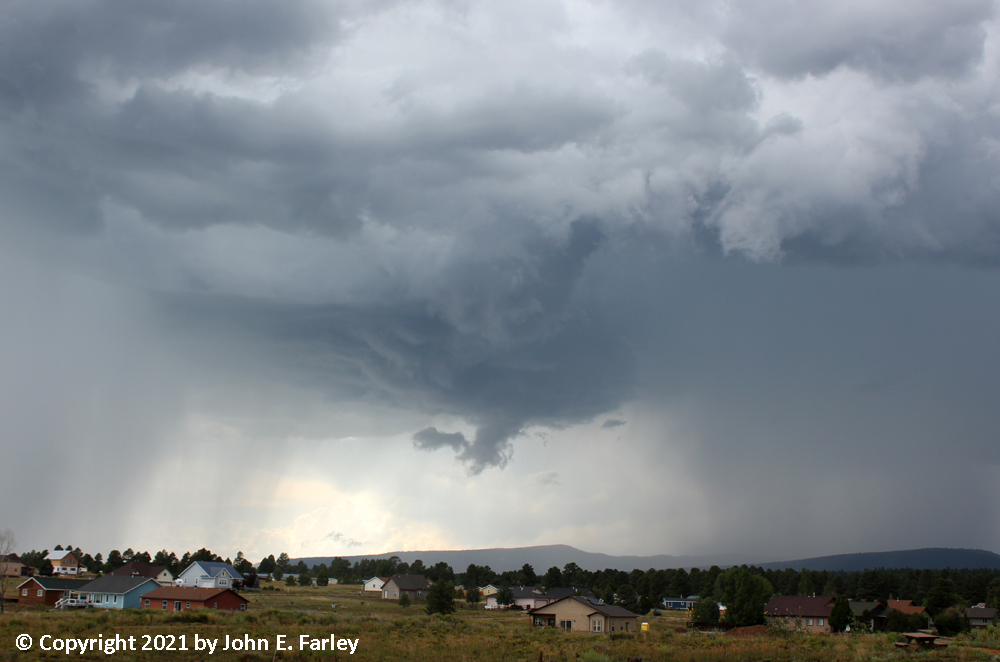 Although this briefly had a bit the appearance of a funnel cloud, I do not think it was, as I could not see rotation in the lowered part below the wall cloud. And it did not last too long, evolving into something that looked more like a tyupical wall cloud: 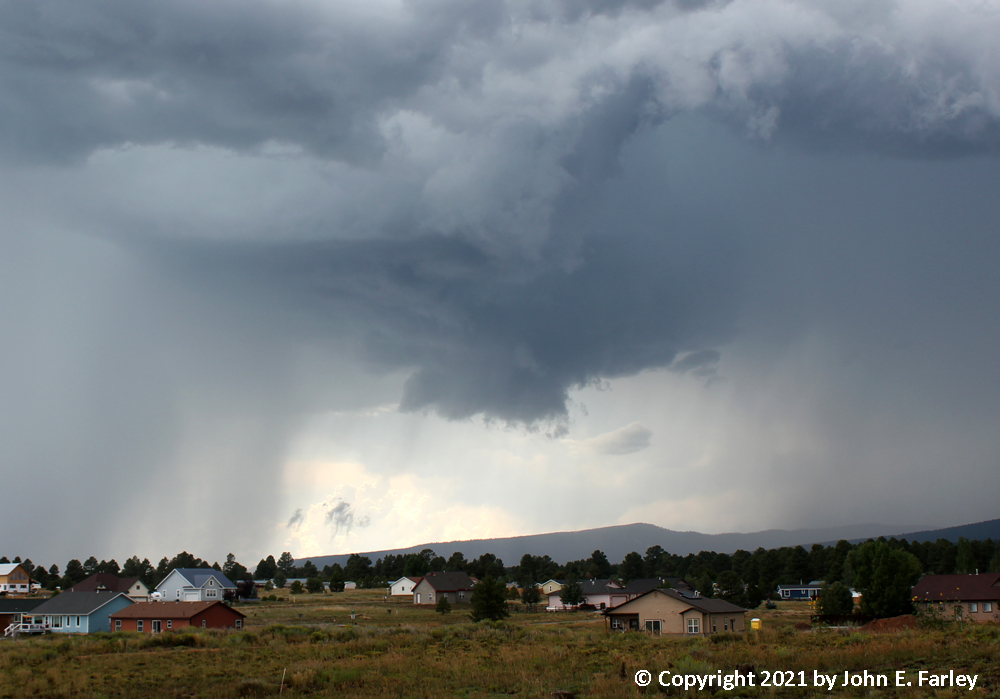 The area of precipitation to the right (north) of the meso/updraft was from this cell; the other area of precipitation to the left was from a new storm that developed just to the south or SSW of the original one. At some point - I am not sure whether just before or just after the picture immediately above, I switched to video, from which I later pulled this video capture, which I would probably regard as my best picture of the day: 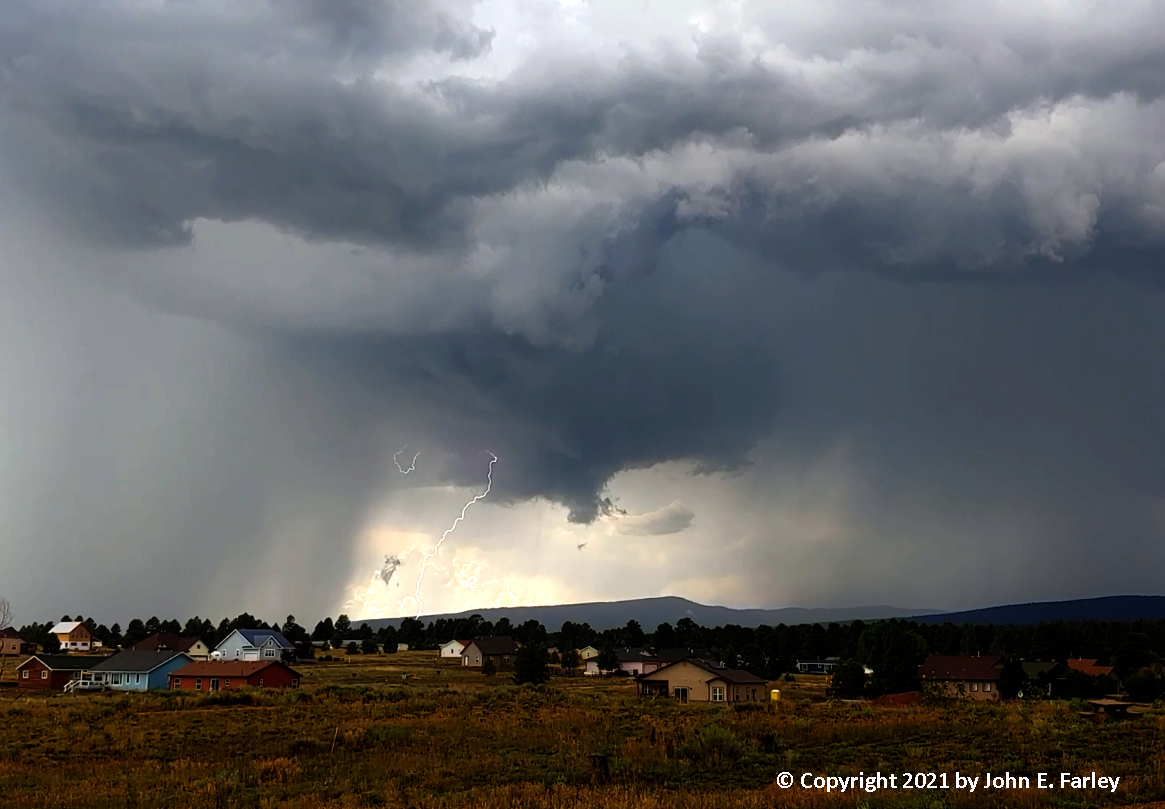 We don't get this kind of storm structure too often in southwest Colorado, particularly with lightning coming right out of a wall cloud. After this the storm continued on to the northwest, and I went home, where my wife reported a lightning strike had occurred very close to the house - at first she thought it had struck the house, but apparently it did not, or at least there was no damage if it did. She also reported a burst of heavy rain and small hail, as did others in the Pagosa Lakes area.

This was probably my best day of the month for lightning, though the photography was challenging for two related reasons. There was a lot of bright light behind and in places coming through under the cloud base from behind the storm. This presented two photographic challenges. First, there was extreme contrast in the picture, which is hard for cameras to handle, particularly when you are using a Lightning Trigger or similar device with which you need a longer-than-usual exposure (I was using 1/10 of a second) to give the camera enough time to capture a bolt. The result is that the dark clouds are under-exposed and/or the bright areas are overexposed. Second, a lot of the lightning, or parts of the bolts, anyway, was occurring in the areas with a bright background. Where the background was brightest, there was very little contrast with the lightning, making it hard to see. These issues can be addressed up to a point in post-processing, but it can be hard to get it to exactly what your eyes saw. This first picture, I will admit, is probably a bit overprocessed, but I like the effect nonetheless: 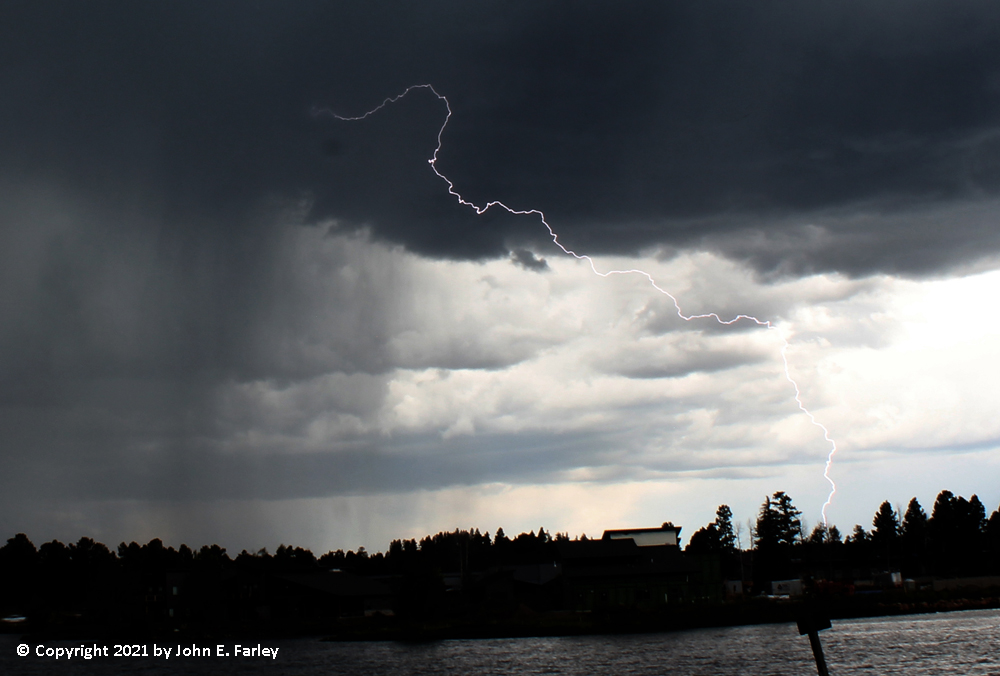 Here are a couple more pictures showing other CG lightning bolts. All of these pictures were taken looking across Piñon Lake, looking roughly toward the south. 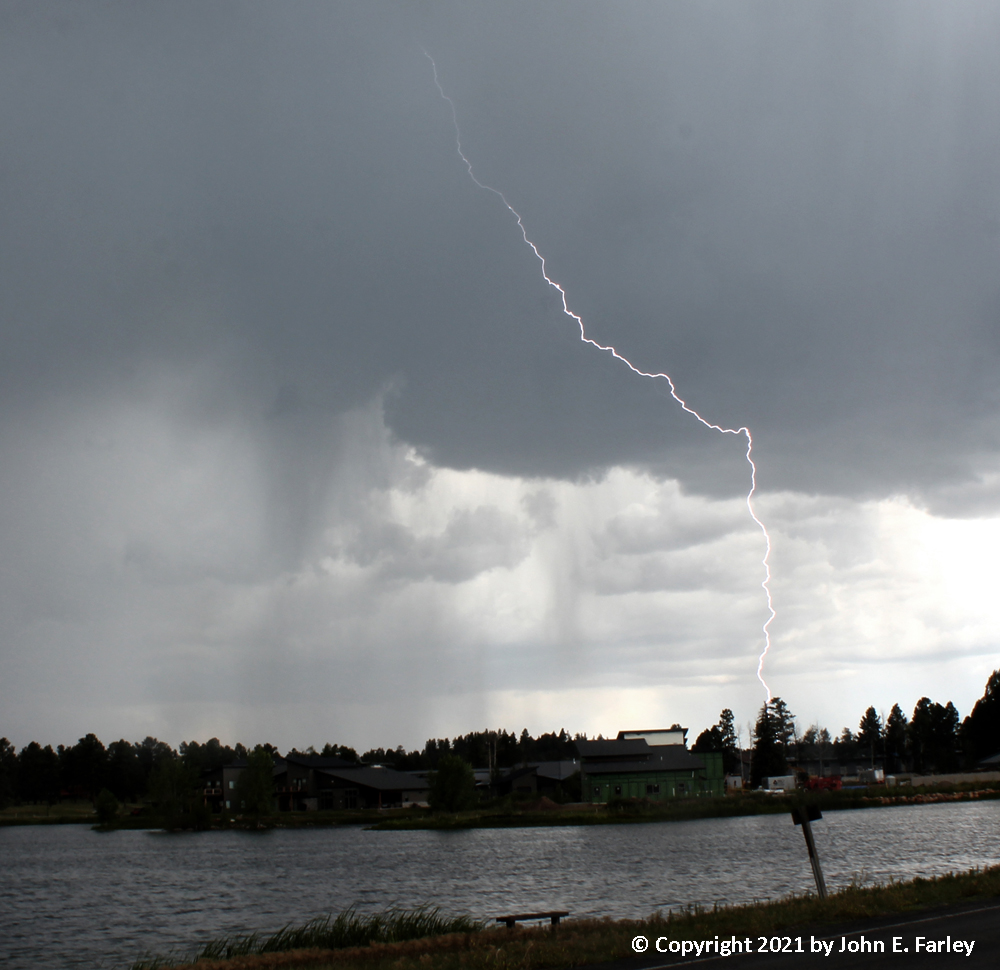 The bolt in this picture is a different one from the one in the previous picture, but both of them must have struck fairly close to the same location. I like the lightning in the next picture because of the crossing bolts. 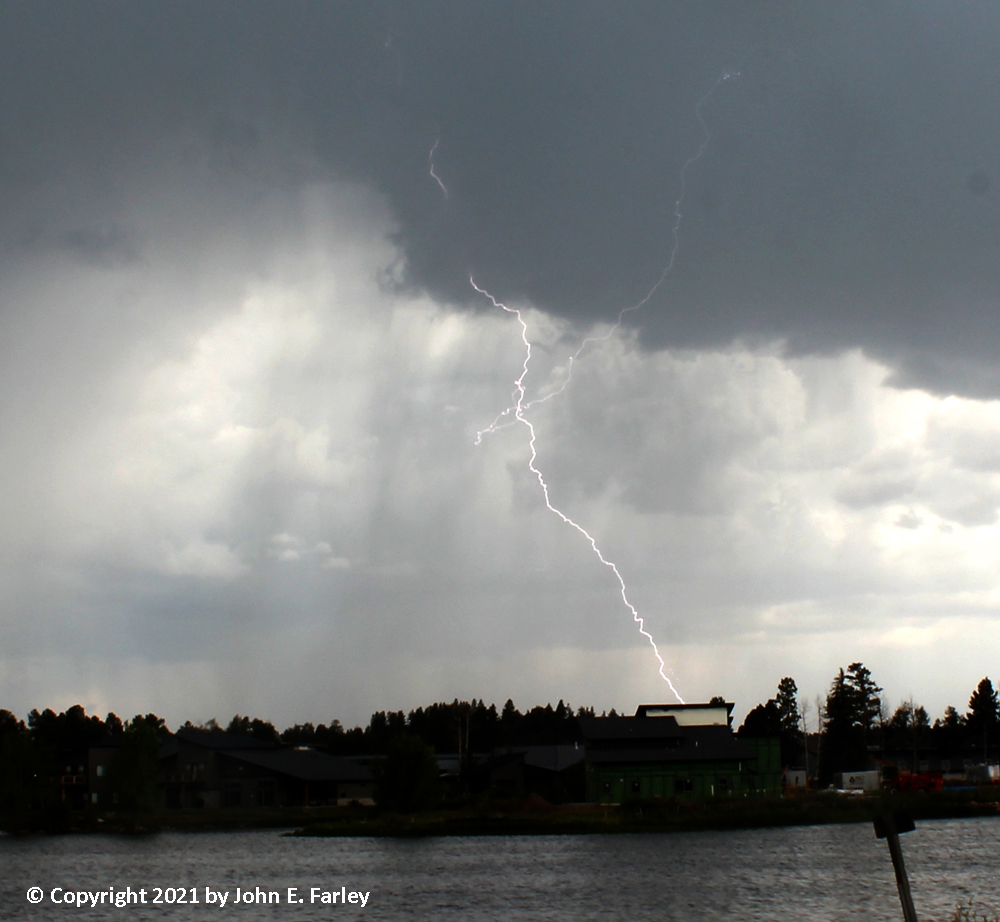 After July ended, the weather pattern changed to a much drier pattern through the first week of August, with increasing amounts of wildfire smoke from the West Coast and Northwest. Hopefully the pattern will return to a more traditional monsoon pattern again pretty soon, as models seem to be indicating as of August 7.