I had been trying to document thundersnow this season ever since January. Experienced it two or three times, but on those occasions was not in a position to get video. Other times when I was trying to get video, nature did not cooperate. But on this day, May 10, it did, big time! A half hour of it at the top of Colorado's Wolf Creek Pass, and I was there with camera rolling! Here is my account:

2:15-2:30 - After a busy day at home, I am watching radar and the online lightning tracker. They are showing a broken line of thunderstorms moving east to west from the San Luis Valley up the east slopes of the San Juans. The storms are associated with circulation around the northern side of a slow-moving closed low over New Mexico. This system has produced a variety of weather over the past few days, including a massive hailstorm in the Denver area and widespread severe weather beginning Monday in CO and NM. It also produced a number of tornadoes in New Mexico on Tuesday, as well as snow in the highest elevations of the CO and northern NM mountains. And now, with these storms moving up the east slopes of the San Juans, thundersnow may be coming to mountains soon. I decided to head up into the mountains to try to catch some thundersnow.

Here is a radar image from around 2:15. The X near the top center marks the location of Wolf Creek Pass. Note the broken line of convective precipitation (thunderstorms) to the east of the pass. These were moving toward the west. 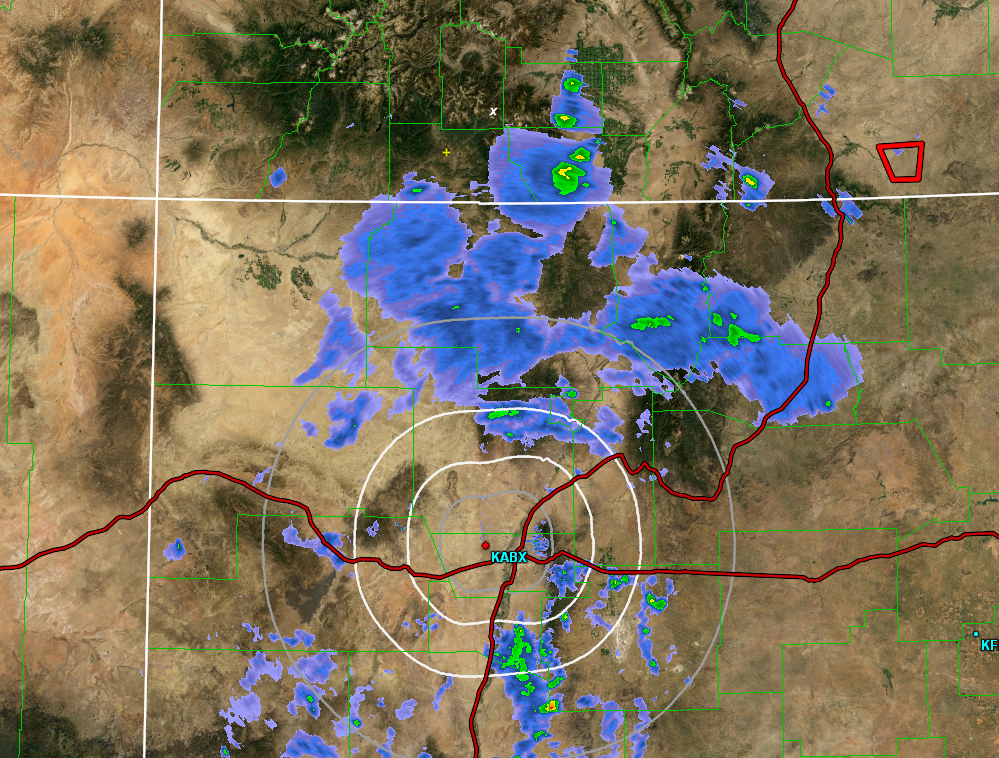 2:45 - I am on the way up. I stop to survey the sky at the east edge of Pagosa Springs, where I can see snow is falling in South San Juan Wilderness. Farther north, the storm is still on the other side of the mountains, so I can't see a lot, but the lightning tracker is showing lightning due east of Wolf Creek Pass and southweard from there. I decide the best bet is to head for Wolf Creek Pass, as 1) it seems to be in the path of the storms, 2) the elevation is high enough that the p-type will be snow, and 3) unlike some options farther south, the roads are paved.

3:15 - I arrive at Wolf Creek Pass. Dark convective cloud bases are visible to the east.

3:25 - A gust front feature is approaching from the east. Here is a picture of this feature: 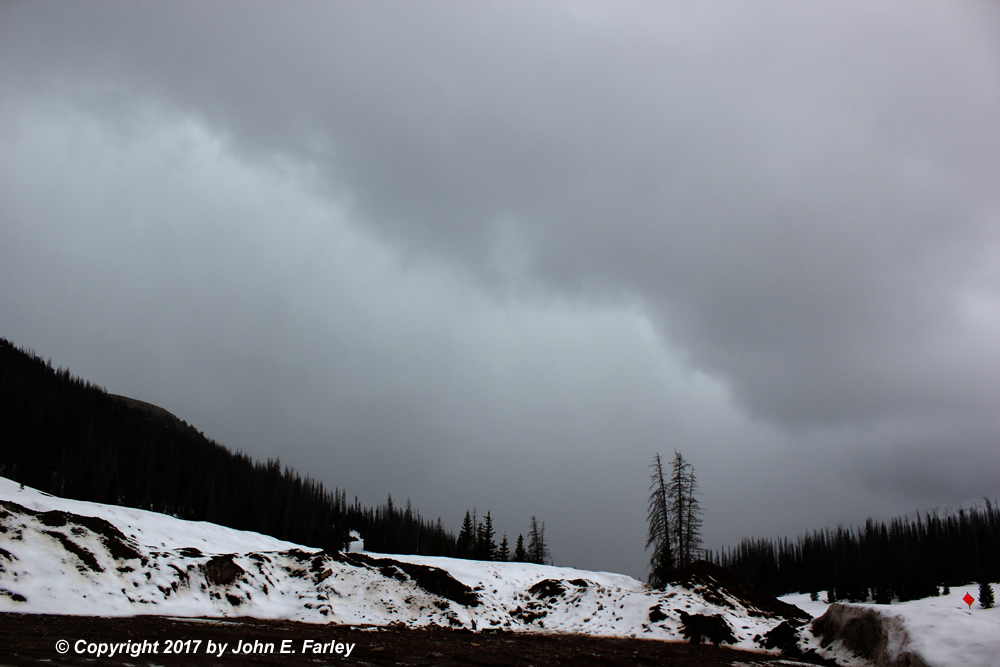 3:30-4:00 - Thundersnow! Over the course of this approximate time, I experience at least 13 rumbles of thunder with snow falling. The storm begins with brief mixtures of graupel and hail with ordinary snow, but within 5 minutes the precipitation becomes all ordinary snow. And it remained that way thereafter. By 4, when I had to leave, snow had accumulated a half inch with rumbles of thunder every few minutes, and I saw or recorded 2 or 3 visible flashes of lightning. I later heard a report that the snow eventually accumulated to 2 inches around the top of the pass.

Here is a loger Youtube video. This is an edited video showing highlights of the entire event from beginning to end - 30 minutes of storm edited down to less than 8 minutes, including every rumble of thunder with the snow coming down:

Around 4, I had to leave due to evening commitments. Here is a picture from around the time I left. 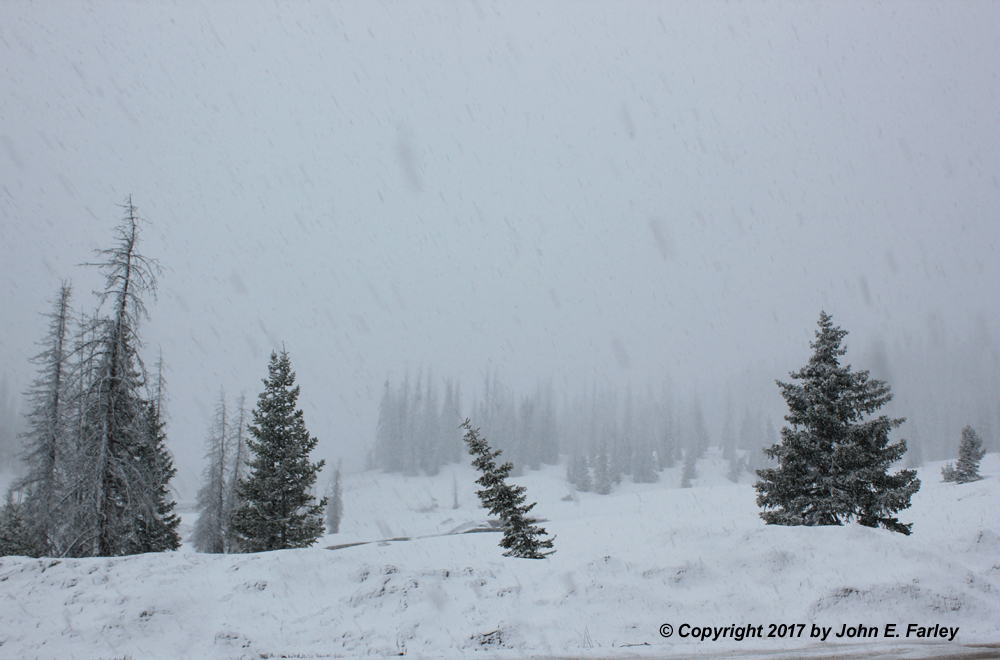 Now about a half inch of snow on the car and on top of the existing snow, though less on the mud in the parking lot, which was warm and wet enough to cause some melting. FYI, the elevation at the top of the pass is around 10,850 feet. Coming down, I was in all or mainly snow to around the upper runaway truck ramp (somewhere around elevation 9400). Then a mixture of rain and wet snow all the way home from there, as low as downtown Pagosa Springs, around 7000 elevation.

Here is a lightning map I downloaded when I got home. This shows all the lightning strikes that occurred in the previous 2 hours. Notice a general east-to-west pattern of strikes west-northwestward across the San Juan Mountains, with a number of strikes near Wolf Creek Pass, again indicated by the white X: 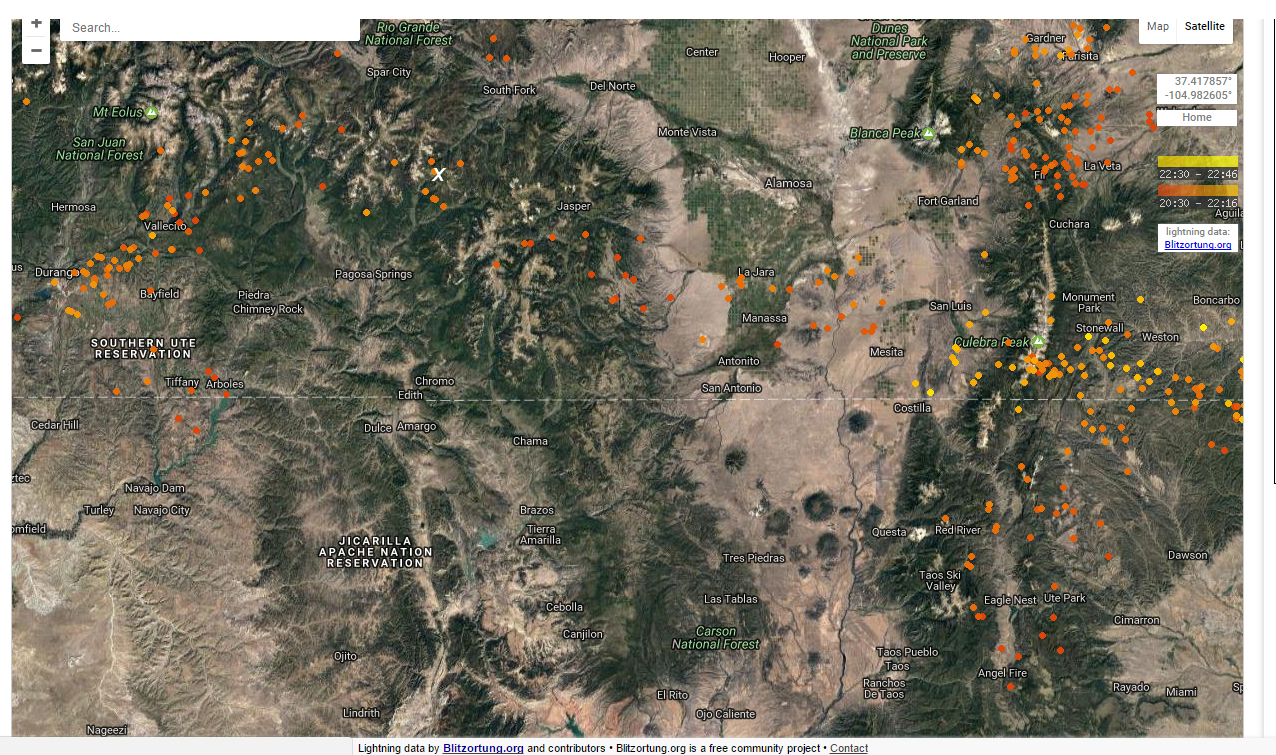