May 16, 2021 Storm Chase - Spectacular (but "Backward-Moving")
Supercell East and Southeast of Pueblo, CO


Starting out from La Junta, CO after the previous day's chase, it looked like I would not have to go far. The setup was similar to the previous day, albeit with a little better instability (CAPE progged in the 1500-2000 range on much of the eastern plains of CO, best in the southeast quadrant, where I was) but, on the other hand, probably less wind shear. The highest instability would be right near where I was, close to the La Junta area, maybe slightly north or northwest. There would again be upslope east winds at the surface with better moisture than the previous day, leading to the better instability. But mid-level winds would be very weak, and the stronger upper-level winds would be far to the west. Still, with that much instability and moisture and at least weak directional shear, supercells would again be possible, and SPC again had much of eastern Colorado in a slight risk.

Although convection would likely start early near the mountains, the models did not have much happening until 2 or 3 in the afternoon on the plains where the better instability would be. That gave me time to drive to the area of the previous day's brief tornado south of Rocky Ford, to see if I could see any damage. I did not, but that is not too surprising given that, in the only ground-level circulation video I saw, it was in an open field. Having time for a sit-down lunch, I went to a locally-owned Mexican restaurant in Rocky Ford and was not dissapointed, enjoying cheese enchiladas with a spicy, slightly sweet red chile sauce. After lunch, there still was not much happening, so I hung around the La Junta area a while longer. Even toyed with going to the southeast, where storms had initiated near Campo. But the forecast instability was better where I was, and the actual instability at the time, per SPC mesoanalysis, was better to my west or WNW than to my southeast, with CAPE indicated to be as high as 2500 near or a little east of Pueblo. So when I saw a narrow line of cumulus clouds starting to build up in the northwestern sky, I figured that was where to go. So I headed north, then west, as the cumulus gradually developed into a broken line of storms north and west of Ordway, to which I headed. By the time I was a few miles east of Ordway around 2:20, the tail-end storm was more or less directly to my west, now with a nicely-backsheared anvil and a very hard updraft: 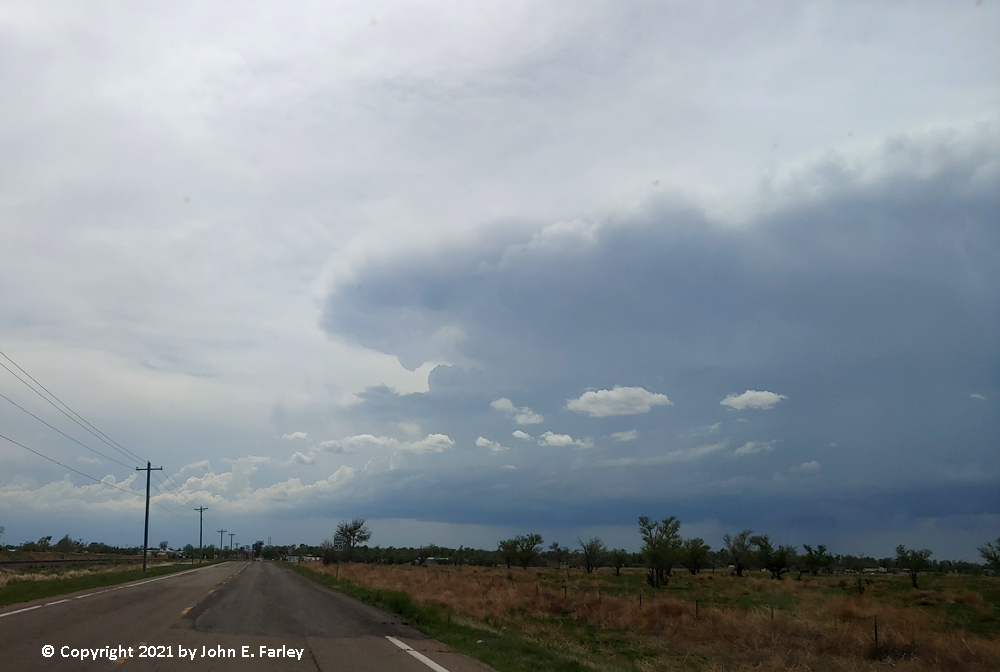 There was no wall cloud, but that would change. I found a county road at the north edge of Ordway that headed west for a number of miles before dropping south to near Olney Springs. As I headed west toward the storm, it developed into a gorgeous supercell by around 3:25 p.m. with, at first, a very LP appearance:

I am not sure if it was really LP given the weak mid and upper wind fields, but it certainly had that appearance. Gradually, it developed a nice beavertail and took on more of a classic supercell appearance: 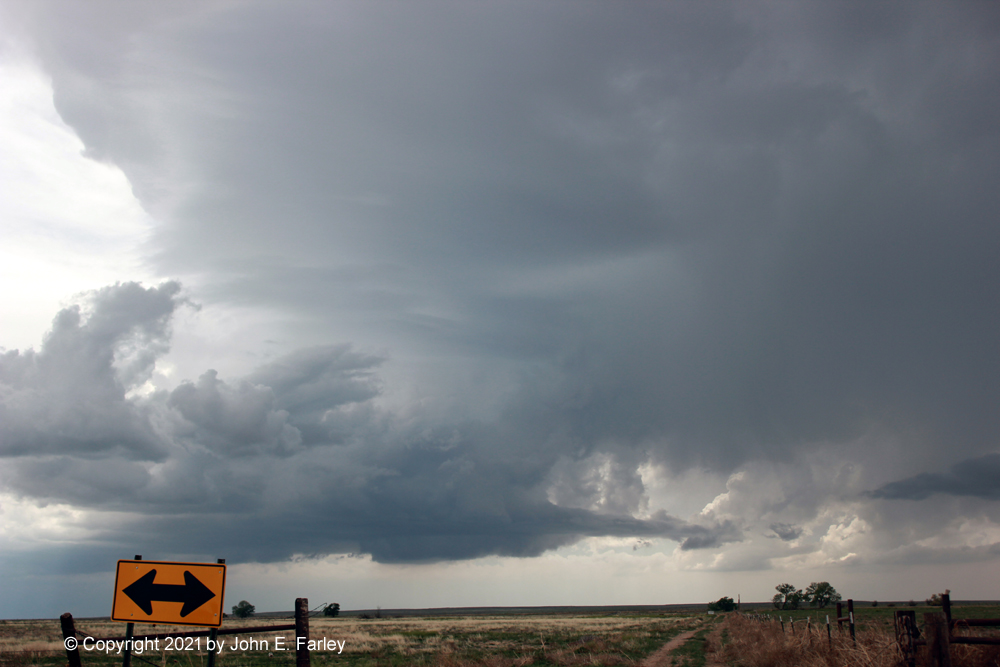 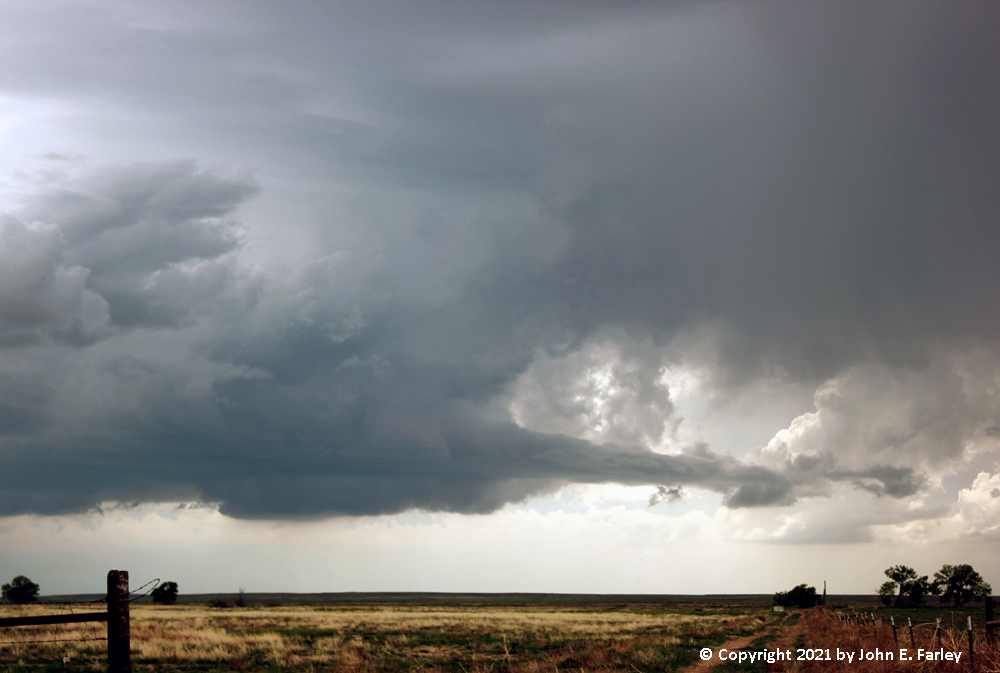 All three of the pictues above were taken from just south of where the county road turns from east-west to north-south and heads south toward the Olney Springs area. This was the best storm structure I have seen in at least a couple years, and at this time I was thinking that severe weather, including big hail was imminent, and maybe even a tornado eventually. Also, being not too far east of the storm, by now I was very conscious of escape routes I might use if the storm threatened to move over me. But there was one big fly in the ointnment with both of these possibilities - the weak mid-level winds. As I watched the storm, it became evident that, if anything, it was moving away from me - to the south or southwest, not to the east or northeast. It was actually moving slowly toward its updraft side, something it would do for the next two hours and something I have never seen a supercell do on a sustained basis for that length of time. This was happening because, with the non-existent mid-level wind, the only thing steering this storm was back-building. So instead of moving in some direction with an easterly component, as most supercells do, this one was slowly drifting to the SSW as it backbuilt in that direction. That took it into an area under the anvils of storms near the mountains to the southwest, which, combined with the weak shear due to no mid-level wind, also led the storm to weaken somewhat and become a little less orgainzed after the first half hour or so.

I worked my way down to Fowler, which the storm was going to pass west of, and took route 167 south from there toward route 10. The storm was a little weaker, less supercellular, and more multicellular by now as it drifted off to the SSW, getting a little farther to my west as I headed south. But I noticed there was a fair amount of lightning, so I got out my lightning trigger and was fortunate to capture this bolt: 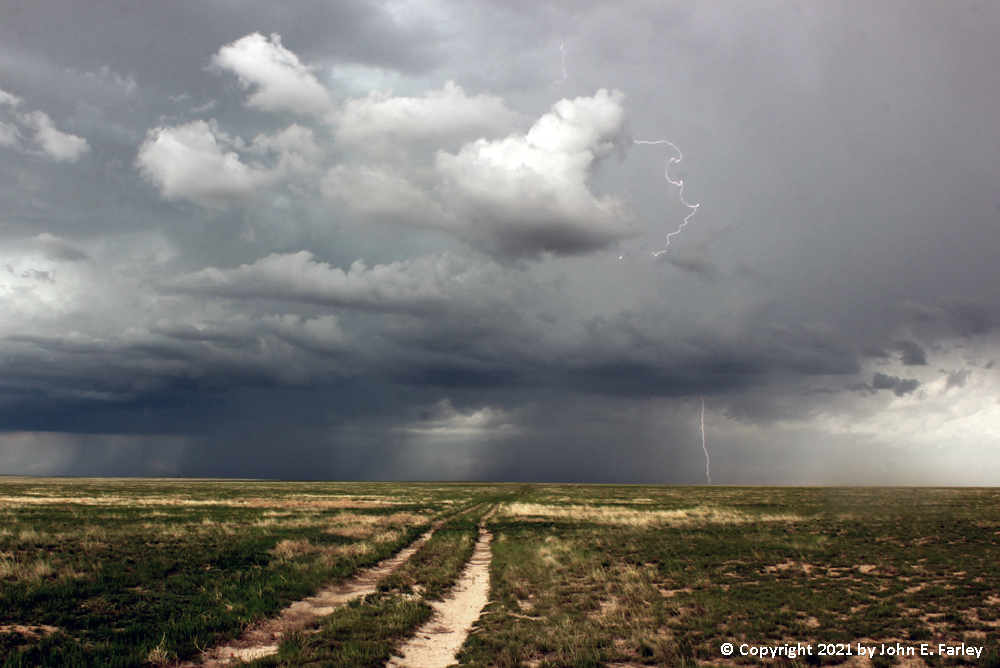 I did not realize at the time that it extended all the way from the anvil down through part of the updraft and then to the ground - at the time I only saw the part of the flash from the cloud base to the ground. So I am very pleased with this capture. By around this time, the storm was beginning to intensify again, and a few minutes later at 4:20, it got its first SVR warning, for 60 mph wind and quarter-sized hail. The motion in the warning was described as nearly stationary, but it was pretty clear to me that the storm was still drifting slowly to the SSW. I continued down 167 to 10 and turned right, to the WSW toward Walsenburg and the path of the storm. I knew it would pass somewhere between where I was and Walsenburg, and it did. To the south, under the flanking line, a feature formed that looked briefly like an attempt at a funnel: 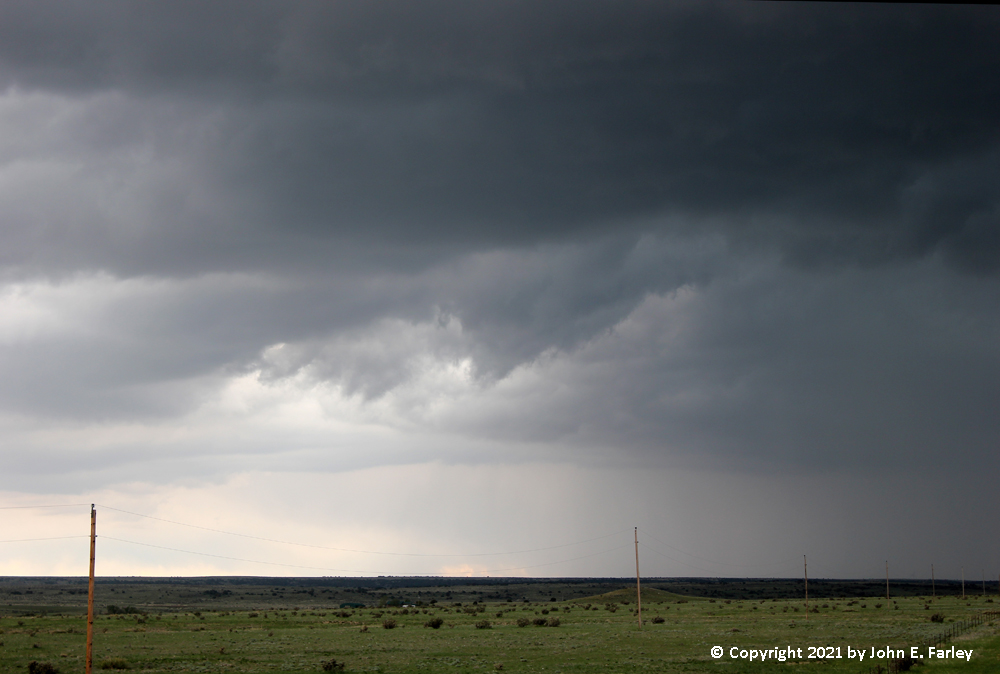 Not sure if it was or not, but as we will get to later, another storm in the line did produce a landspout. However, this feature did not last long, falling apart and disappearing in rain a few minutes later. As the main storm got closer to the highway, it took on a clear HP supercell structure - more what you would expect with the weak mid and upper winds. And I was right in the place to see the best of that structure: 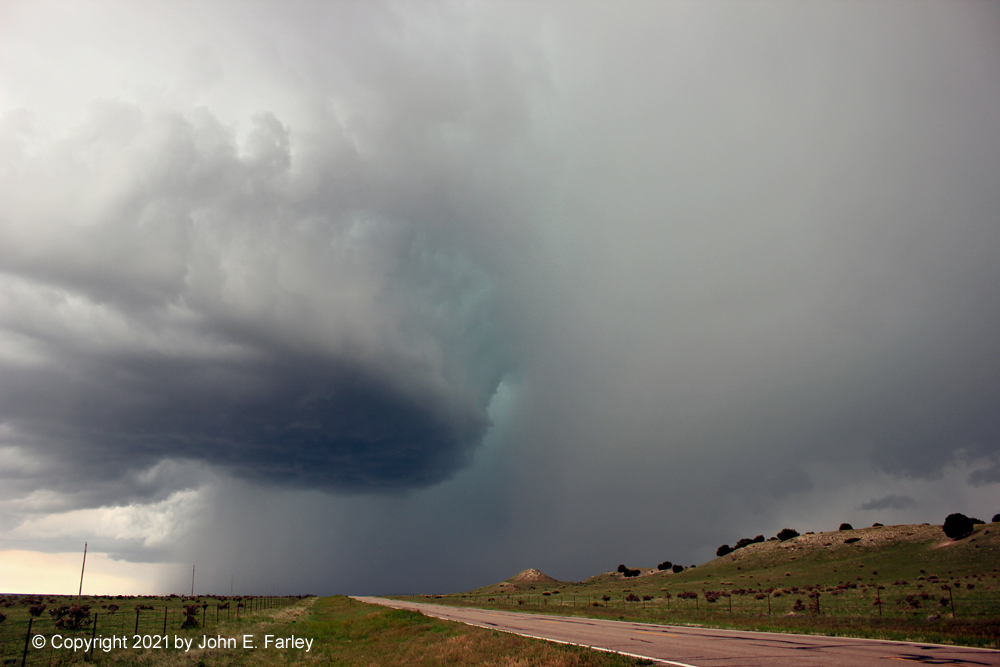 This picture was taken around 4:55, just a few minutes after the storm got its second SVR warning, now for 60 mph wind and half-dollar-sized hail. The motion was described as to the south at 15 mph. Not wanting to get pummelled by hail, I sat near mile marker 38 and let the storm cross the road ahead of me. Once it had largely abated, I proceeded to see what had fallen in the way of hail. Right near the county line of Pueblo and Las Animas Counties, I entered an area where the road and the ground were covered by hail. Proceeding cautiously, in another mile or so I came to a spot near mile marker 28 - just into Las Animas County, where the hail was an inch deep on the road, with the biggest stones I could see around penny sized (.75 inch): 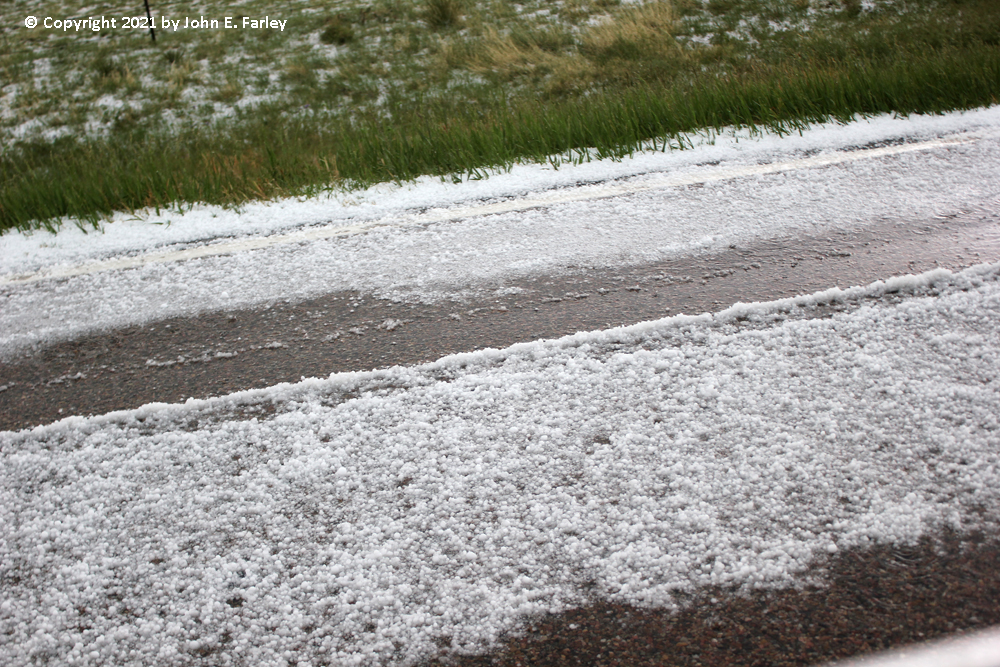 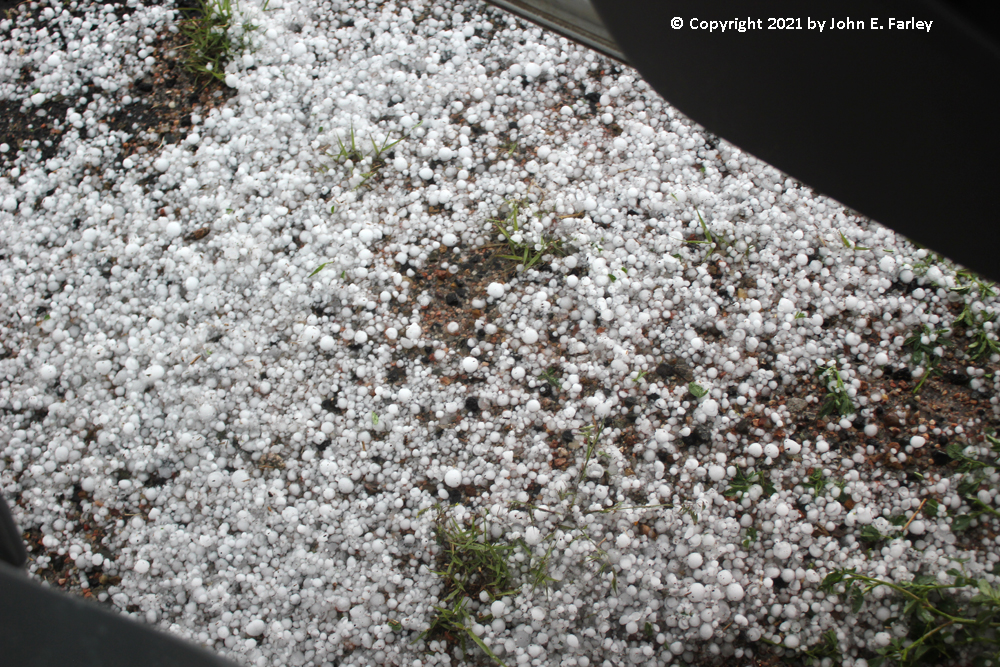 There is a stretch of the route I had been on for this part of the chase where there is no phone signal, but when I got to where I could get one, I learned a couple interesting things. First, the next cell up the line to the northeast from the one I was on produced a landspout tornado, which turned out to be quite photogenic. I was disappointed to miss that, but I really see no reason to second-guess myself. First, and most important, my chase was successful without a tornado, seeing such spectacular supercell structure that ranged from LP to classic to HP, each of which I was in a good position to see and document. Second, my storm was clearly the tail-end storm when I got on it, seemingly the most supercellular, and certainly had the best appearance. There seemed no good reason to leave it for a less good-looking storm up the line, and in any case once I was on this storm, I was too taken with it to look elsewhere. Probably would not be bad to check the radar and warnings for other nearby storms no matter how good the one you are on is, but I did not, and do not regret it all that much.

The second interesting thing I learned is that another storm north-northeast of La Junta now had a tornado warning. Looking at the radar, it did show a decent circulation. Since it was described as moving slowly to the south, I figured I could go back up to La Junta on 10 and potentially catch that storm somewhere NE of La Junta. So I did, but during this time the storms grew upscale into a large complex. The tornado warning was dropped, but there were SVR warnings all over the place including multiple ones including La Junta. By the time I got to La Junta, the storms had backbuilt across route 10 behind me and were pretty much in every direction from La Junta. I decided to go a little south off of route 10 a few miles SW of La Junta and watch the storms move in. There was a line of SVR warned storms near Rocky Ford, but the most interesting one was a new one that went up farther south, and offered up this feature to me: 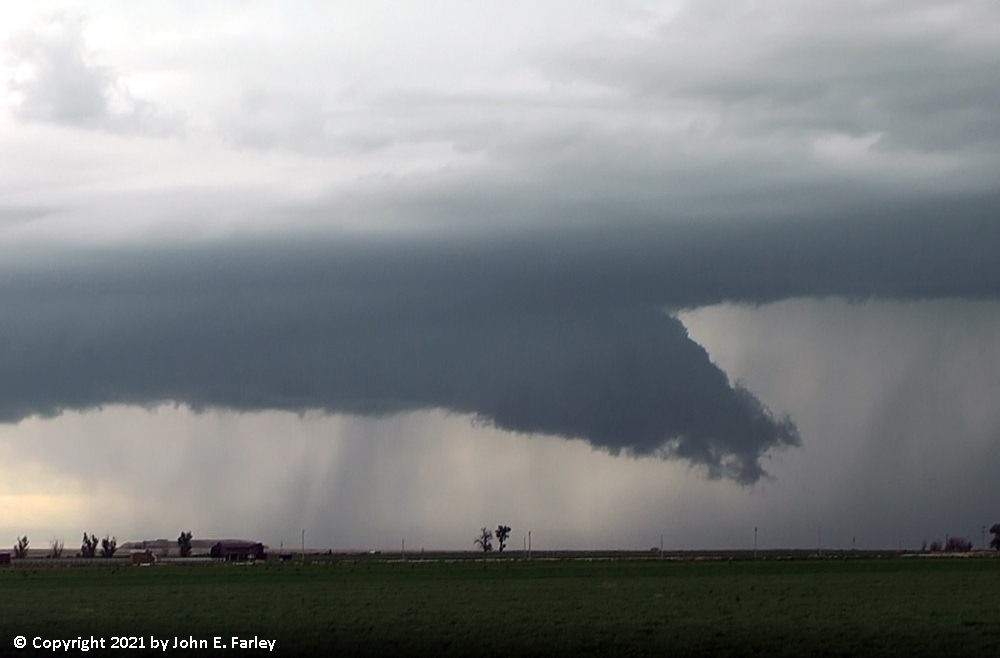 This was something of a wall cloud/shelf cloud hybrid, and did look menacing for a time. However, it was soon undercut by outflow from the Rocky Ford line of storms, which also produced strong wind at my location, out ahead of the main precipitation. I decided it was time to call the chase, and headed to La Junta to get a room and a steak dinner to celebrate the successes of this day and the previous day.