Forecast discussion for the day: Very unstable air would lie over much of MO and IL ahead of a slow-moving cold front - and unlike earlier days, there would be some stronger upper winds to create speed shear and forcing to go along with the instability, as a slow-moving cold front began to move into the area. Thus, with the approaching front and increasing shear, the chances that storms would actually form was higher, and if storms did form, they would likely be severe. Here is my initial thinking, 2 days before the event, as reflected by this slight edit of a post I made in the Chaser's Forum forecast thread for the day:

The northeast quarter of MO also looks good (in addition to much of Illinois, which had been emphasized by an earlier post), with this evening's NAM breaking out precip in the area of maximum instability between 21z and 00z. In fact, the NAM has large areas extending from around southwest MO/southeast KS/northeast OK up across MO into the northern half of IL with CAPE above 3000 and EHI 3 or better. Cold front should be moving slowly enough not to overly force the storms and create an instant linear mode, although there is less directional shear than I'd like. That's still a long time from now and things can and will change, but Sunday definitely looks like it has potential over a fairly wide area.

Here is another post I made the night before the chase day: This post focuses on the MO/IL aspects of tomorrow's setup. I am debating two possible targets - one in IL along I-80 from roughly La Salle-Peru eastward, and the other along I-44 in MO in the Rolla-Lebanon area and possibly southwestward. Both targets have good combinations of instability and shear. Per this evening's NAM run, the IL target has more shear, albeit slightly veered surface winds, but less instability. It also has better upper support. However, movement of the storms into the Chicago metro area could be an issue chase-wise, although until/unless that happens, the chase terrain is better than in the MO target. The MO target has stronger instability and, although slightly less shear overall, perhaps slightly more backed surface winds. Overall combination of instability and shear is a little better in the MO target, with EHI of 6-9 in many places from Rolla on down I-44 into OK. This evening's NAM breaks out strong storms in both of my areas of interest, although I think that in the IL target there could be TOO many storms. If that happens with the MO target, though I don't think it is as likely there, moving farther down I-44 and finding a tail-end Charlie might be the solution, as the NAM breaks out less precip farther down toward Joplin and Tulsa. I guess all things being equal I would prefer the MO target, since it will put me in a much better position for the next two days of active weather in OK and/or KS. I think right now I prefer that target anyway due to the slightly better overall parameters in that area and the better chance of avoiding a massive, unchaseable mess of storms everywhere which worries me about the IL target. I do think there is a decent chance of tornadoes in both areas, though. Will decide in the morning based on morning model runs and data. Looks like tomorrow could be a busy day in a number of areas.

In the end, I split the difference between these two targets and chose a chase target in northern Missouri. I discarded the Illinois target because the parameters were no better there than elsewhere, and I wanted to go west, not northeast, to set up for the next couple days' chase opportunities in OK and KS. On the morning runs, the storm parameters looked at least as good in northern MO as in southern MO, and the chase terrain is somewhat better north of I-70. Accordingly, my plan was to head up U.S. 61 to the Hannibal area, check data, then shift west as needed.

The chase: I headed out around 11 a.m. with that general plan. Much as expected, an area of extreme instability developed across Illinois extending southward across Missouri from the northeast through the central into the southwestern part. However, the storms more or less foiled my plans by forming in two lines - one very near me along the eastern edge of the area of best instability, and another way out west near Kansas City along the western edge of the best instability. By the time I was past Troy, MO, radar was already showing storms forming and rapidly intensifying in Illinois from just east of Bowling Green, MO in a line extending northeastward from that location. Additionally, I saw lots of agitated cumulus and some bona fide towering cumulus ahead of me and to my west. Not wanting to let the line get ahead of me so I would have to play catch-up, I just decided to stop and wait for a while near Eolia, MO and watch radar. After a while, I noticed a strong storm on radar to my west near Montgomery City, so I decided to go after it. However, it quickly weakened, and by the time I got about midway between Silex and Olney, I visually noticed a new storm developing just to my south near Hawk Point (where I had seen multiple tornadoes the previous April 23), so I decided to go after it. It briefly looked pretty good both visually and on radar, but I was behind it as I pursued it back east to Elsberry, where I could follow it no further due to the Mississippi River - and it was weakening anyway. At this point I decided the smartest thing was to return to I-70 and blast west for the strong of SVR-warned cells coming out of the Kansas City area.

However, by the time I was on I-70, my plans started to change again, as a very intense cell had popped up somewhere a little south or southeast of Jefferson City, and was moving up toward Hermann. By the time I reached Warrenton, that storm was SVR warned, so I decided to drop south and intercept it: a SVR warned storm in a favorable environment that is 30 or 40 miles away makes a much more realistic target than one that is still nearly 200 miles away!

This storm became the first of three supercells that I would intercept this day near Treloar, MO, which is located south of Warrenton and east of Hermann. This first storm, which I had to wait a little while for once I reached the Treloar area, had a massive, ground-hugging wall cloud when I first saw it. Treloar is located where the hilly country south of Warrenton ends at the northern edge of the Missouri River flood plain, which is a couple miles wide at that location, offering some visibility in what is generally a very hilly, wooded area. My first good view of the storm was from a Missouri River access point a few miles west of Treloar. Here is a video capture: 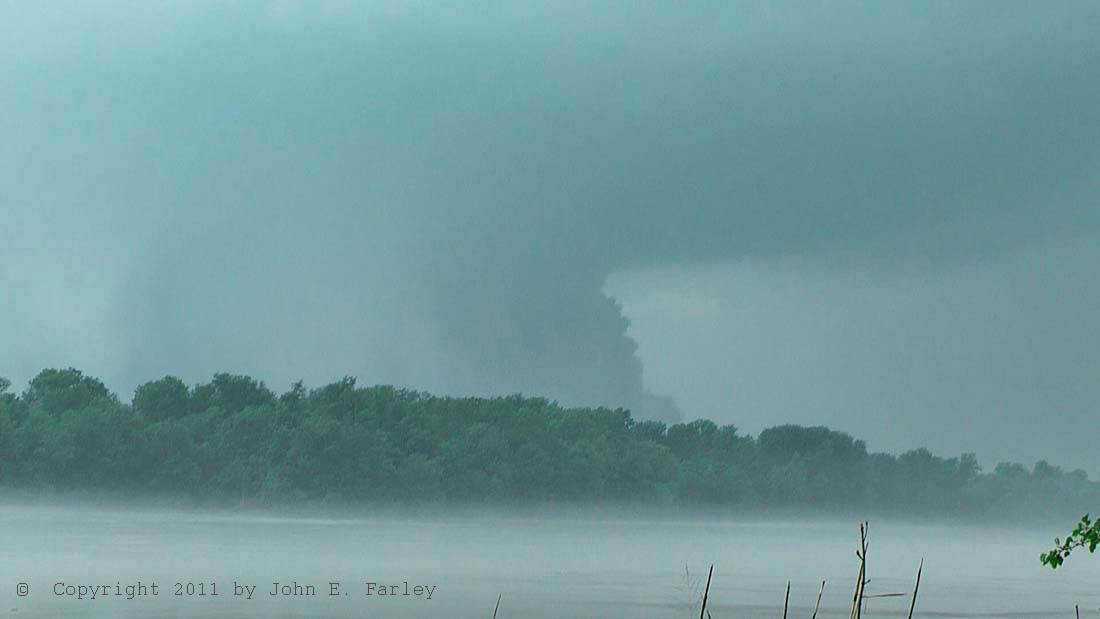 The fog rising from the river gave the approaching storm almost an unworldly appearance. A photo taken a few minutes later, when the storm had moved a little northeast and there wasn't quite as much fog, can be seen here. Both this photo and the video capture above were very zoomed; the storm was actually quite far away at this time. Because I thought part of the large wall cloud was going to move directly overhead, placing me in a place where I could be at risk for a tornado and/or large hail, I backed off to a place I had seen with a good view across the flood plain a mile or two east. There, I was treated to this storm structure: 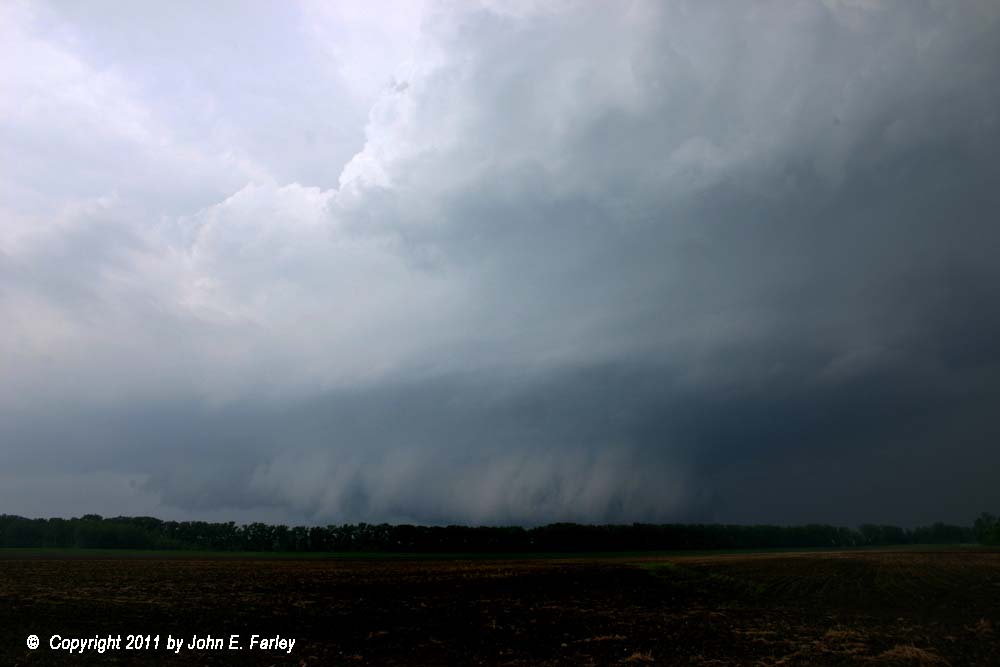 Shortly after this, the storm became a bit more disorganized-looking and the SVR warning on it was allowed to expire. But then the wall cloud tightened again and began to rotate a little, and the storm visually improved on radar. I phoned in the wall cloud, and between that and the intensification showing on radar, a new SVR warning was issued. Here is the view around that time, now looking north into the hills and woods northwest of Treloar: 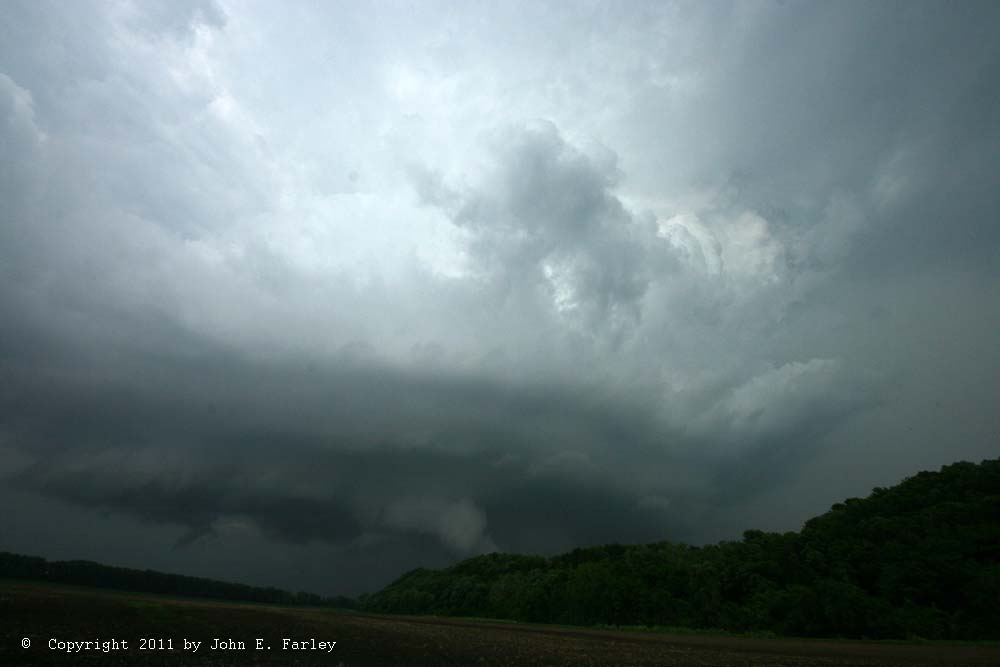 View of supercell a little later looking northwest from just west of Treloar.

Around 4:30, the storm produced golfball hail between Treloar and Warrenton, as it had done 40 minutes earlier south of Hermann. I tried to chase this storm for a while, but I couldn't really keep up, it seemed to be weakening a little, and another intense supercell had popped up right behind it, again in the Hermann area. So, I doubled back to intercept this next supercell right behind the first one. I caught up to it a couple miles west of Treloar, just in time to see a strongly rotating wall cloud pass over the road ahead of me. Just then, a TOR warning was issued for the storm, based on an indication of strong rotation on radar. However, the rotation didn't last long. I returned to my spot on the flood plain but pushed a little farther south toward the river (which is a couple miles south of route 94 at that point), to get the best view I could into the wooded area to my northwest. As a local spotter out with his family stopped to chat with me and watch the storm, it did try to wind up one more time between Treloar and Warrenton around the time of this video capture: 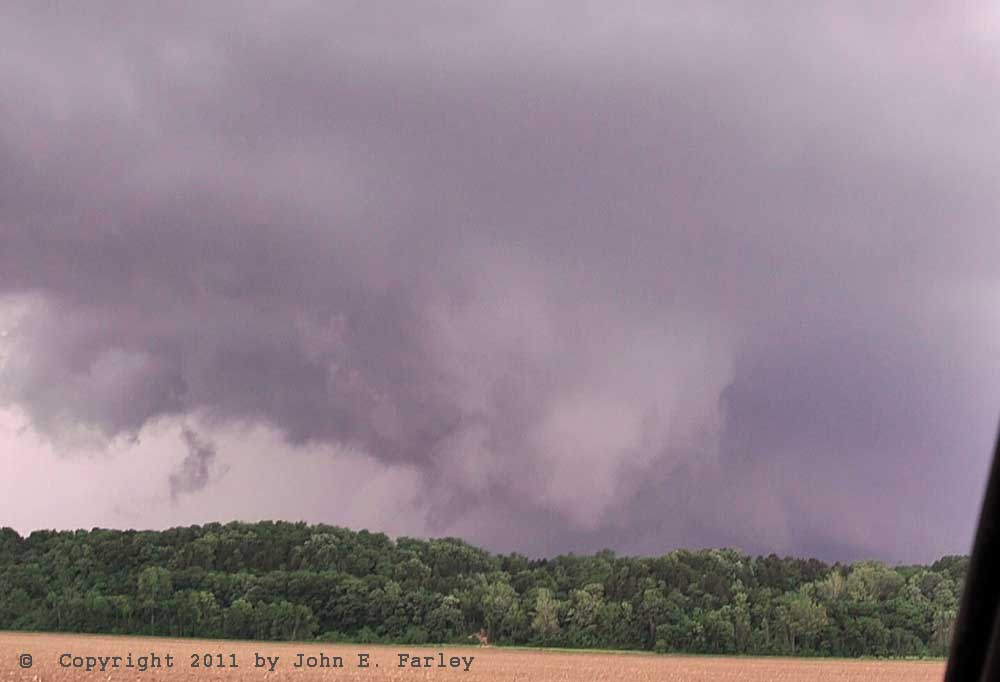 There was a little bit of rotation at the time this picture was taken, but not as much as there had been earlier when the rotating wall cloud passed over the road in front of me. This storm, too, produced large hail in the Warrenton area - there was one report of 2.5" with this second storm around 5:20, again in the area between Warrenton and Treloar. There were also reports of funnel clouds around Foristell.

The third storm was a nasty looking tornado-warned HP that went right over Hermann toward dark, but darkness and the HP nature of the storm precluded any decent photo ops. This storm also produced a few hail reports, but increasingly the bigger issue became flooding due to the cells tracking repeatedly over the same areas. I decided to cross the river to Washington and return home via I-44 to avoid driving in blinding rain and hail most of the way. Stayed ahead of the storm until I was about 5 miles from home. Returned home and planned to head out for OK the next morning; no point in paying for a motel when I ended up so close to home.

This was another day of getting supercells but not tornadoes, something seems to be my experience on a lot of chases in 2011.

Final thought: In the forecast discussion, you may have noticed that I had considered a target along I-44 in MO. As many of you know, this turned out to be the day of the Joplin, MO tornado, the deadliest tornado in the United States in more than sixty years. I am glad I didn't choose that target, and was thus spared seeing the carnage that tornado produced. My thoughts and wishes for recovery go out to everyone in the Joplin area. There is a link to the American Red Cross donations site on my main 2011 storm observation page - please consider making a contribution.