This was mostly a travel day across MO into OK to set up for the next day's chase opportunities, but I was able to make a few storm intercepts along the way, too, including the powerful bow echo that sliced through the St. Louis area with high wind around mid-day.

The plan for today was to travel to somewhere near the OK-KS border to set up for the next day's (5/24) intense severe weather setup in Kansas and Oklahoma. But the potential for severe weather was strong pretty much anywhere along the way today, too, along I-44 anywhere from St. Louis down to Tulsa. I got a fairly early start, around 10:40 a.m., and did not really expect to encounter any severe storms until afternoon, even though a bow echo had raced through southwestern MO during the morning. So I was a little surprised to hear on the radio as I neared the St. Louis-Franklin County line that a SVR warning had just been issued for western Franklin County. I made a gas stop at the route 100 Washington, MO exit and afterwards, set up the computer, and saw a very impressive bow echo heading rapidly northeast into Franklin county. A new bow echo had formed on the northeastern periphery of the thunderstorm complex associated with the earlier bow echo in southwest MO, and was now racing to the ENE, toward the St. Louis metropolitan area - and toward me. I figured I had plenty of time to set up somewhere in or near Union in a spot where I had a good view and would not be where anything could blow into me. I found a spot on a dead-end frontage road on a hill in town, and parked and watched the storm move in. Got some pictures and video of the menacing-looking storm as it approached, then experienced high wind (I estimated 50 mph at the time, but based on damage that occurred in town, it may have been more) and blinding rain around 11:55 a.m., followed by about 5 minutes of hail from noon to 12:05. Most of the hail was pea-sized, but right at the beginning and again at the end (with a little more of it at the end) of that period there were a few half-inch stones. I phoned in my wind estimate and a report of the hail. Once it subsided, I headed back for I-44, and noticed a very large tree branch down 2 or 3 miles east of town, which I phoned in. Actually, as it turns out, there was a lot more damage than that, as the NWS local storm reports indicated a building unroofed and numerous trees and power lines down around town.

Here is a video showing a 4x timelapse of the storm as it approaches, followed by actual-speed video of the wind, rain, and hail:

The damage from this storm was not just around Union, but all across the St. Louis area. Nearly 80,000 lost power throughout the area; numerous trees and powerlines were downed; there were at least 3 injuries, and other buildings besides the one in Union were also unroofed.

Once the worst of the storm had passed, I continued on down I-44, with some trepidation at what I would see going through Joplin, which had been hit the evening before with the deadliest individual tornado in more than 60 years. But as I was approaching Joplin, I was distracted by a new cluster of thunderstorms, some of which were SVR warned. Just east of Joplin, I considered cutting south to see a storm that looked like a supercell on radar (though since the area was in the cool air behiind the first line of storms, which also went through Joplin, the chance of any more tornadoes was thankfully small). But I didn't, because I couldn't do it without a core punch, and I did think the best chance of good storms would be much farther west, in northern OK. But I did see what appeared to be a large inflow band going into an agitated updraft base to my south, when I suddenly realized I was in the tornado path - every tree was broken or missing most of its branches; every sign and light pole was broken or bent over (no matter how large it was); and the few buildings in this area all had major damage. This was around mile markers 10 and 11 on I-44 - then I was out of it. The tornado passed slightly north of the main Joplin exit with all the motels, restaurants, etc. But around mile markers 10 and 11, just southeast of Joplin, the damage path was wide and extensive, although this area was less developed than the area just to the west of it and north of the main exit, where most of the damage and deaths and injuries occurred. I later saw on the NWS Springfield Web page that the tornado, which was rated EF5 based on damage it did in the heart of Joplin, was around EF2 to EF3 where it crossed I-44.

After Joplin, the road crosses in to Oklahoma, and suddenly I was seeing flash flooding everywhere. Every stream, or even low area, was under water. Between Miami and Vinita (where I planned to exit and head west to intercept strong storms that had blown up along the dryline), I saw a road and a couple buildings that were innundated - and there must have been a lot more of this; this was just what i could see from the highway. I knew there were flash flood warnings, but had no idea that some places here had received 10 inches of rain. And that would not be all - between backbuilding of the storms around Joplin and eastward movement of the storms I would later chase in Oklahoma, this area got five more inches of rain later - bringing the grand total to 15 inches in some spots around Vinita and Miami.

Exiting at route 60 and heading west from Vinita, I had my eye on an isolated storm that had gone up ahead of the main line south or southeast of Ponca City. I thought that, being more isolated, it might have a chance of doing something in a fairly favorable environment - good shear and, at least in terms of the air moving in from the south, good instability. Also, my chance of intercepting it before dark would be better than for the storms farther west. Soon the storm got a SVR warning, then a TOR. I headed west to Bartlesville, then south for an intercept south of there. But the storm became increasingly HPish, then weaker and disroganized, and shortly after I got in position for an intercept, the TOR warning was dropped. Still, edging my way back toward Bartlesville, I managed to get almost directly under the storm's updraft, and saw some strong cloud motion - but nothing that threatened any tornadoes. But the storm did reintensify enough to produce more heavy rain in the area off to my northeast around Vinita and Miami that already was getting massive flooding. At this point, I called it a chase, and headed back to Bartlesville for the night.

Not too long after I got to the motel, the sun came out near sunset and lighted up the clouds nicely, giving me some nice sunlit mammatus photo ops: 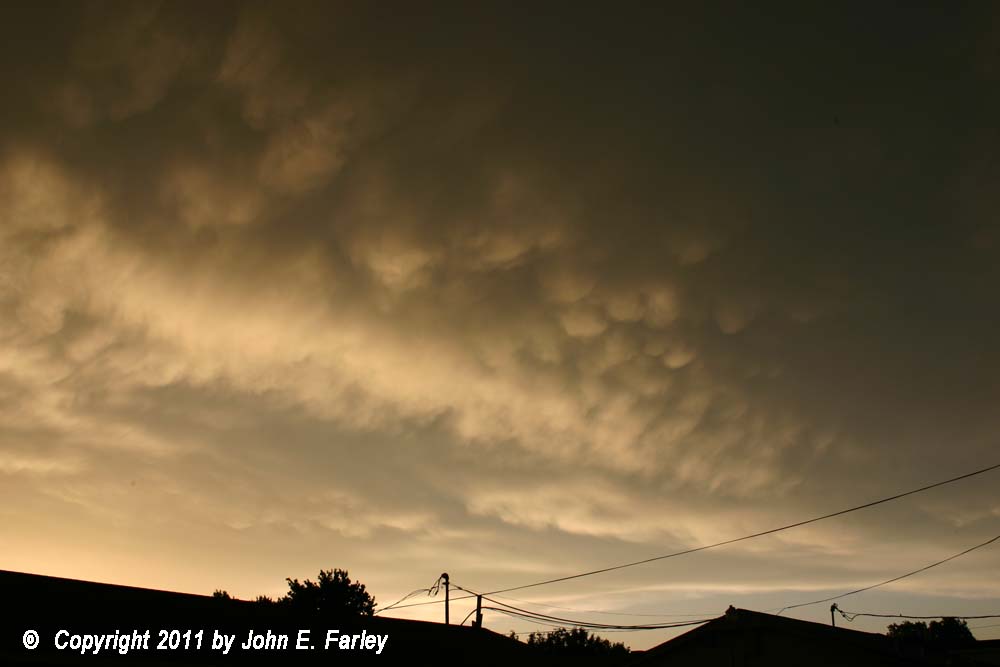