This was a day that had been talked up for several days as one of the most potentially dramatic chase days in years in Oklahoma. Very high instability, strong directional wind shear, and the right timing of the jet stream surging into the area would make for a high potential for strong tornadoes over a large area of north Texas, Oklahoma, and Kansas. There were many possible targets across this area, with pros and cons to each one. In the northern Kansas target, along the northern edge of the triple point low and the warm front, the shear would be extreme, but the storms would likely be numerous, very fast-moving, and moving in unusual directions - north or even northwest once you get far enough westward in Kansas. Southward the shear would be a little less but still strong, with explosive instability. The morning of the chase, I edged west initially to I-35 from Bartlesville, where I had overnighted the night before. Checking data, it was evident that the instability was better to the south, around OKC and southward. But on such a hyped day, the risk of massive chaser convergence leading to traffic jams around tornadic storms struck me as a real consideration on where to chase - and for this reason I did not want to be on the closest storms to Oklahoma City. After lunch, I knew I had to get south some, though, and also west. Anticipating initiation of storms soon, I edged south and west to around Enid. By the time I got to Enid, storms had fired and a hectic and fast-paced day of chasing was under way.

As was the case for many chasers on this high-risk day, this proved to be a very difficult chase for me, due to the wet, fast-moving nature of the storms, too many of them, and intermittent data problems. I intercepted 3 tornadic supercells in OK (between Fairview and Ringwood, between Stillwater and Pawnee, and northwest of Tahlequah) but was a little late for the tornadoes. In fact, each of the three storms produced tornadoes that ended just 10-15 minutes before I was in a position where I could see the potentially-tornadic part of the storm.

My first intercept was of the Fairview storm, which produced a nice rope tornado just southeast of there and a larger, stronger (EF3) tornado farther to the SW of there, west and north of Canton. I was coming from the northeast, though. I had decided to target this storm and had gone as far south from Enid as Hennessey, and turned west. But I became dubious of my ability to catch up to the storm by going west, and I was also concerned that, with the other storms lining up very close to one another in a line extending to the SSE from the target storm, I would be behind all of the storms and done for the day if I continued west. So I decided to backtrack north through Drummond then west on 412 for an intercept - probably a decision that cost me an opportunity to see the Canton and/or Fairview tornadoes. I don't know whether I could have gotten there in time to see them, but I do know that what I did didn't work, because approaching from the north, as I ended up doing when I went southwest from Ringwood on route 58, there was a big area of rain between me and the area of interest. Moreover, I felt that I didn't dare go past the Canadian River, because if I did, I had only one northeast option if I needed to retreat. So I sat a couple of miles north of the river, watched an intense barrage of CG lightning, and waited for the rain to pass over so I could see the area of interest. I was a little concerned about hail, but the radar image didn't suggest there was much of that, and there wasn't. But by the time the area of interest was visible, I could see only a poorly organized wall cloud, no tornado. I followed the storm back north to 412, getting my closest view of it a couple miles west of Ringwood. It made one final attempt with a funnel cloud that never came close to the ground, then the storm rapidly died out due to seeding from the other storms very nearby to its southeast. Here are a couple video captures of this storm: 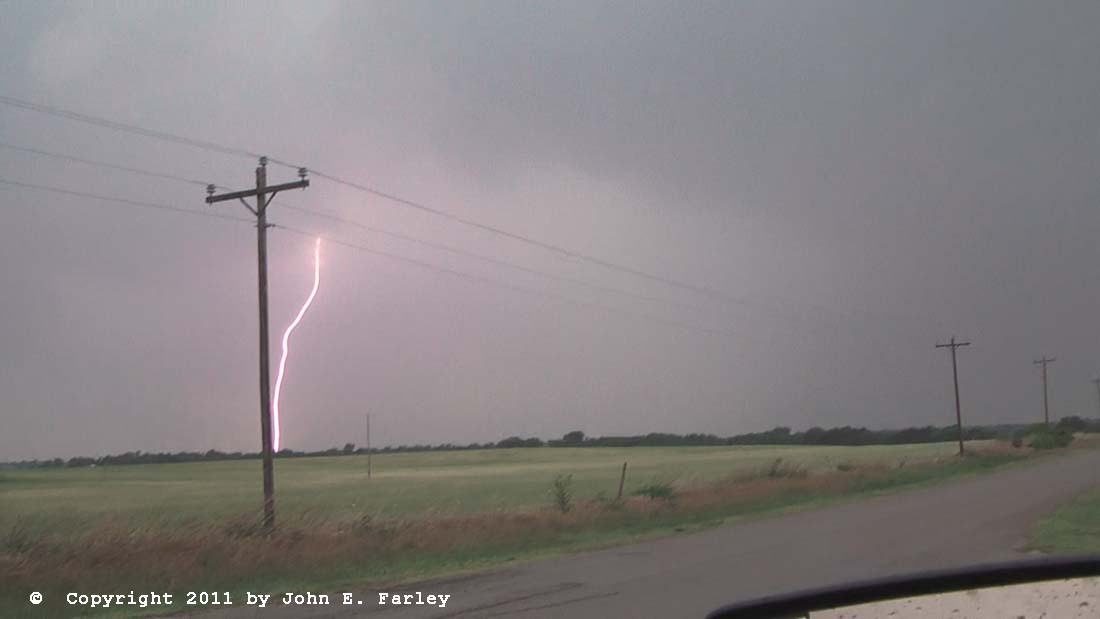 Lightning in storm near Fairview. The tornado occurred on the other side of the rain. 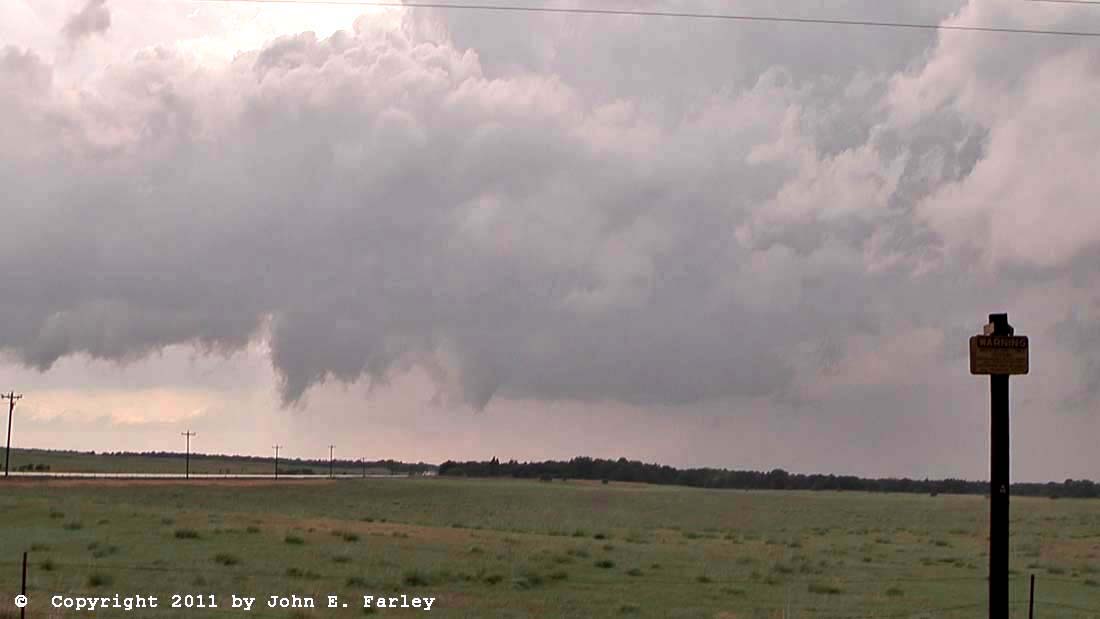 "Last hurrah" funnel cloud (the feature about over the road, not the one left of the road) from same storm, near Cleo Springs - after this the storm dissipated rapidly as it was seeded by other storms to the south.

Now my only option was to get back east, and I blasted east with lots of other chasers, including the TIV and its entourage, in wind and blinding rain from the next storm southeast that had already surged north over route 412. I briefly turned south on 58 a couple miles to explore a small updraft, but saw little of interest, so resumed the treck east, with a brief gas stop in Enid. Just then there was a short burst of quarter to half-inch hail - the only hail beyond one or two small stones that I encountered anywhere. Then I resumed my blast east on 412, hoping to catch up to the tornadic storm that was now working its way toward the Stillwater area.

My best intercept of the day ended up being a rain-wrapped circulation on that storm, between Stillwater and Pawnee, which I watched from just northwest of the intersection of route 412 and route 18. Although it had very much the look of something that could have been a rain-wrapped tornado, the rain wrapping around the meso was so thick that I couldn't tell what was going on inside there. This storm produced one tornado that ended about 10 miles to my southwest just SE of Stillwater, and another that began about 12 miles to my northeast, west of Hominy. Although I didn't realize it at the time, this is the same storm that produced the killer tornado in the Piedmont/El Reno area much earlier. I haven't seen any reports from the area where I observed the rain-wrapped circulation, but damage surveys are still under way. Later, moving east to escape a surging wet RFD, I got blasted by high wind and intense rain in Hallett-but again no hail. I'm a little surprised how little hail I encountered all day - only a little small stuff in Enid. A spotter reported a 60 mph wind gust in Hallett and I would say that was about right.

Here are a couple video captures of the rain-wrapped circulation: 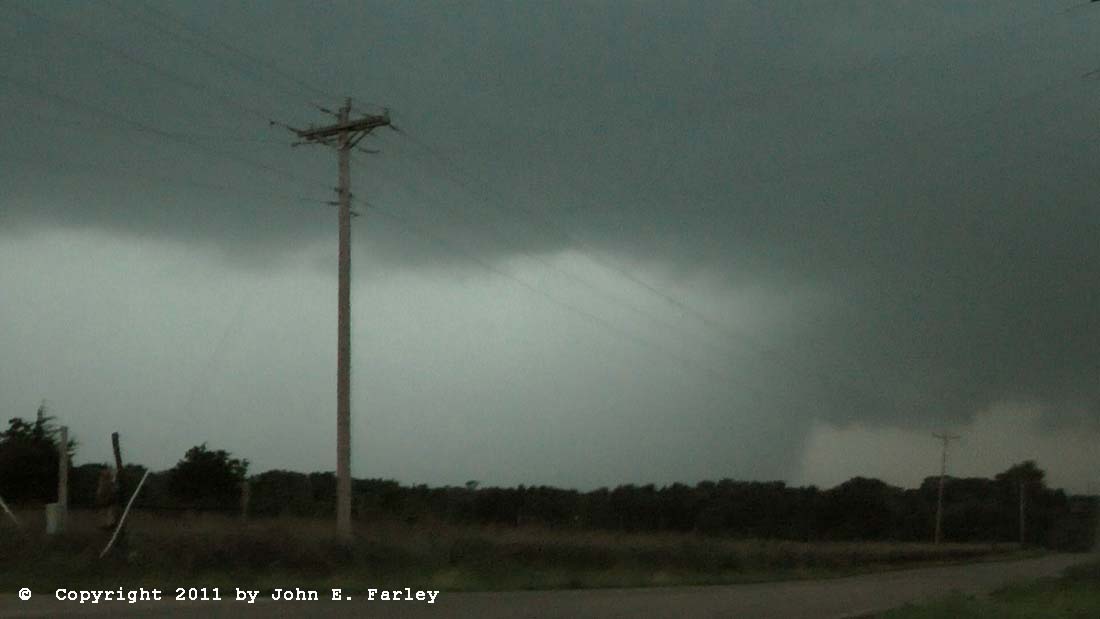 Rain-wrapped circulation approaches my position about midway between Stillwater and Pawnee. 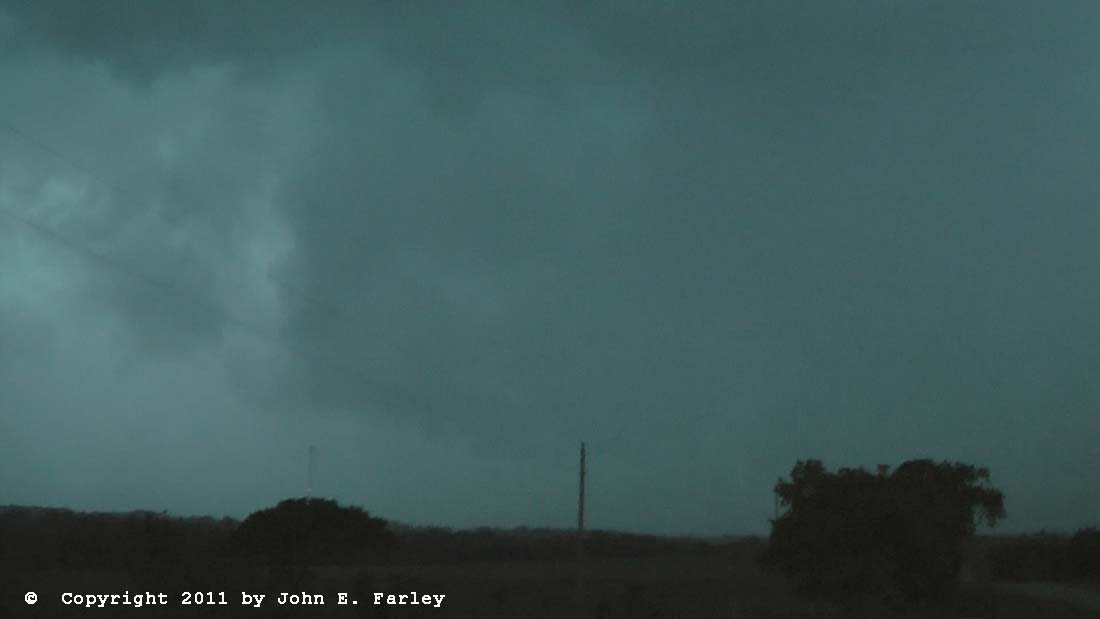 Back side of same circulation.

Here is a video showing the rain-wrapped circulation as it approaches me and, later, the wind and rain in the wet RFD in Hallett:

The third storm I saw, which I viewed after dark, at some distance looking northwest from just north of Tahlequah, also produced multiple tornadoes, including one near Wagoner that I could have intercepted had I not made a wrong turn and lost crucial time. But by the time I figured that out, I knew that I would not be able to get to the Wagoner area before the circulation did, and was not about to try, especially at night. Glad I didn't, since it did produce a tornado in that area, as well as another earlier in Haskell. There was still a wall cloud and possibly a funnel cloud when I saw the storm about 10 minutes after the tornado, looking northwest from a little north of Tahlequah. By then I had given up on the chase and stopped for gas and something to eat at a convenience store a little north of Tahlequah, and while there heard a report, I think from a ham radio, of the tornado east of Wagoner - so I doubled back a little farther north to a high spot to see what I could see - a definite vault area and a disorganized wall cloud, and in the one picture with lightning in the right place (below) maybe a small funnel right in front of the CG bolt. Could be have been something more in that area, too, I suppose, as damage surveys are still ongoing as I write this several days after the event.

Here is a video capture of this storm: 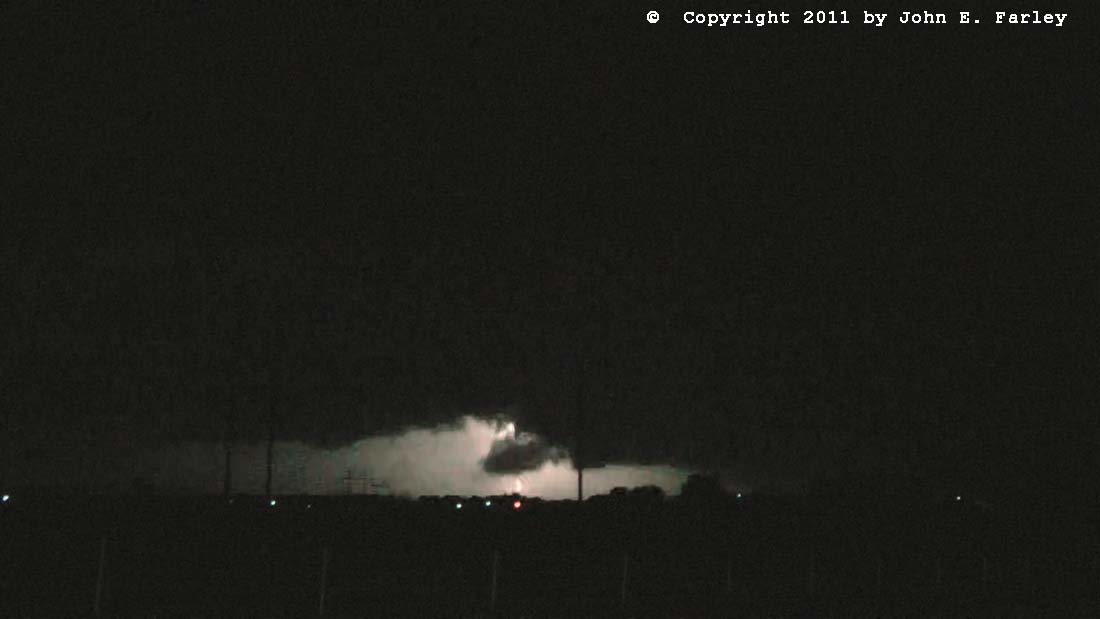 Looking northwest from north of Tahlequah about 10 minutes after the Wagoner tornado.

This was a difficult chase and not at all like I visualize OK dryline storms. These storms were numerous - so many of them that one tended to blend right into the next one, wet, and fast-moving - average speed was probably around 50 mph. And after the first one, they were all east of I-35 in the wooded, hilly areas. Still, I did see three tornadic supercells, so it's far from a bust - and had I been 15 minutes earlier on each, I might have had a much more successful chase.