Starting the day in Perryton, TX after the previous day's chase, I figured I would not have an overly long drive today, just needing to drop south from the northern TX Panhandle to the southern Panhandle, which I could do simply by traveling south on U.S. 83. Today's setup would not be as favorable for tornadoes as the previous day, but they certainly would be possible, and supercells looked likely. Following the eastward movement of the previous day's surface low pressure from northern Colorado across Nebraska, a cold front would surge south across Oklahoma and the Texas Panhandle over the course of the day, likely making it much of the way through the Panhandle, but not all the way through the southeastern part. A dryline would extend north and south through the TX Panhandle and on down into west and south Texas. Severe storms appeared likely along both the cold front and the dryline, with the greatest chances in central, north central, and northeast OK ahead of the cold front. Indeed, already by noon a tornado watch had been issued for most of OK ahead of the front. However, therse storms would be strongly forced by the front, leading to linear, surging storm structures, which would make chasing them difficult A better bet seemed like the dryline, where storms would be more isolated and slow-moving. Supercells seemed likely anywhere along the dryline, though they might be somewhat widely spaced. One limiting parameter for tornadoes would be weak lower-level and perhaps mid-level winds, but there would be directional shear and upper winds would be pretty strong. So supercells seemed likely, and along some boundary such as the dryline or an outflow boundary, localized conditions might increase low-level shear enough for a tornado. The chances of that might be a little better deeper south into Texas, but since my return trip the next day would be to the northwest, I did not want to get too far south. And the intersection of a dryline and a cold front can be a good place to get an intense supercell. So that is what I decided to play, meaning my target would be somewhere in the southeast TX Panhandle near Childress, or possibly just into southwest OK near there - trying, of course, to avoid getting stuck in some place with no way to cross the Red River, which can be a problem chasing in that area.

I made a gas and lunch stop in Shamrock, then continued on to Wellington, where I hung around in that general area waiting for things to happen. Throughout the drive I was under a cumulus field, and at times they seemed to be building up quite a bit - certainly what I would call moderate cumulus, and at times almost towering. And it was warm, humid, muggy - felt like a favorable environment for storms. Yet, while there were lots of storms farther east and northeast in OK ahead of the cold front, there was nothing through mid-afternoon in the TX Panhandle or, for that matter, even in western OK. Incidentally, there is a nice little park with picnic tables and restrooms, looked like even a campground, a few miles north of Wellington. Nice place to hang out and take a break while nothing is going on, except that I could not get a phone connection there. Wellington itself was OK in that regard, though. Concerned that the advancing front and dryline might end up triggering storms more to the east than I expected, given the later initiation, I briefly drifted east to Hollis, OK around 3 p.m. But after hanging out there for a while, I noticed on radar that a storm had popped up a little west of Turkey, TX. So again, like yesterday, I had drifted a little too far east, though not to the same extent. I decided to head for the Turkey area via Childress and Estelline. As I was making this trek, a new Severe Thunderstorm Watch was issued at 3:40 p.m. for much of west and west-central TX, including the southeastern part of the Panhandle, where I was. However, nobody told that to the storm I was heading for, and as I headed for it, it fizzled out. Then two new storms popped up, one pretty close to Turkey and the other to the northwest. Turning north on Route 657 a few miles east ot Turkey, off of Route 86, I went as far as the Red River and positioned myself between these two storms. The storm just to my south was spreading its anvil far to the ENE, with a near constant rumbling of thunder coming from within the anvil. Here is a picture of the updraft of that storm: 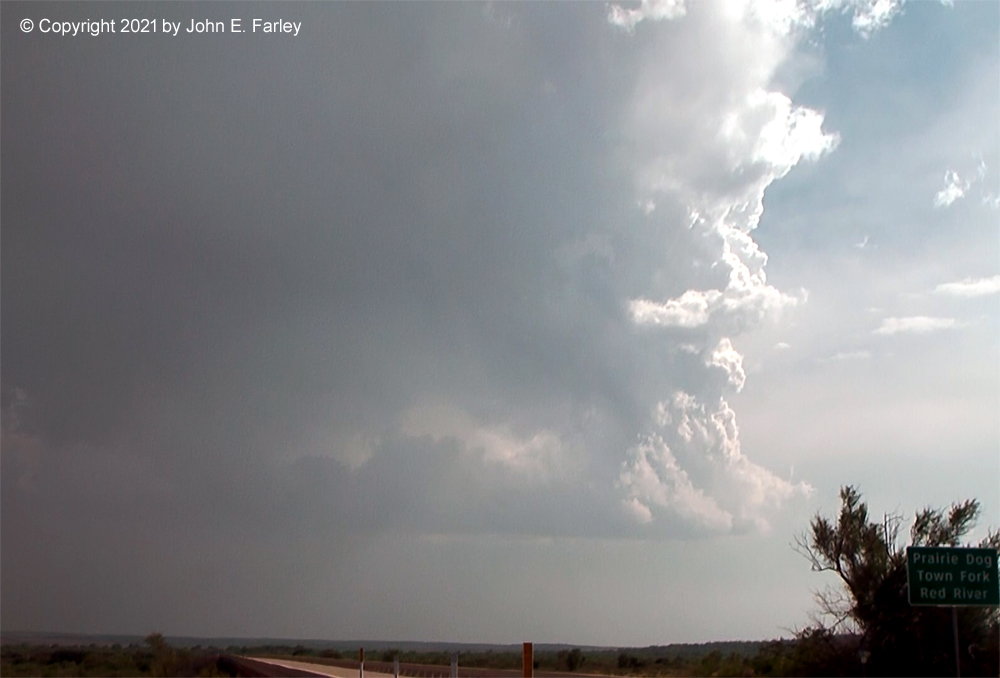 Off to my northwest was another storm, also looking pretty healthy: 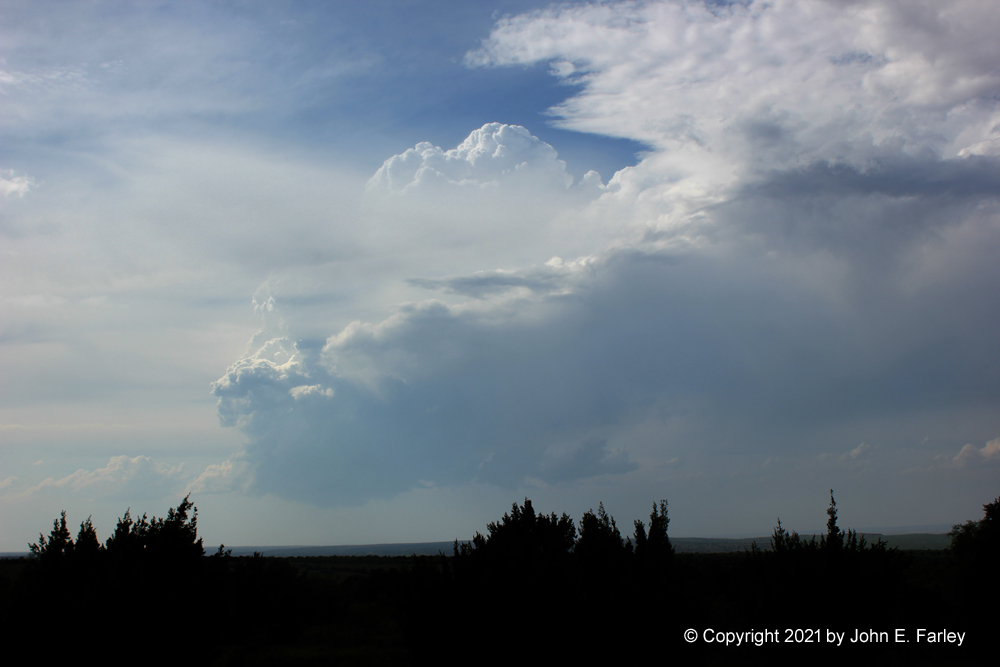 Although both of these storms looked pretty good for a short time, they met the same fate as the previous storm; both died out before they really had a chance to get going very much. The weak surface winds, combined with the very strong upper winds, resulted in the storms getting sheared apart, with the anvils quickly getting separated from the updrafts, which pretty much went poof after 15-30 minutes. However, I then noticed another storm farther west, and this one had a much wider, darker updraft base. I thought this one might have big and strong enough an updraft to survive getting sheared apart like the earlier storms. That turned out to be the case, though soon it would in fact have TWO updrafts, but I am getting ahead of myself on that. This storm was west of Turkey, somewhere near Silverton. I continued north on 657 to Route 70, where I could go west then south, and decide whether to head toward Turkey or Silverton when I got to Route 256. Once I got to that intersection, it turned out I could just sit for a while, because I had a good view of the storm, which had by then clearly becvome supercellular: 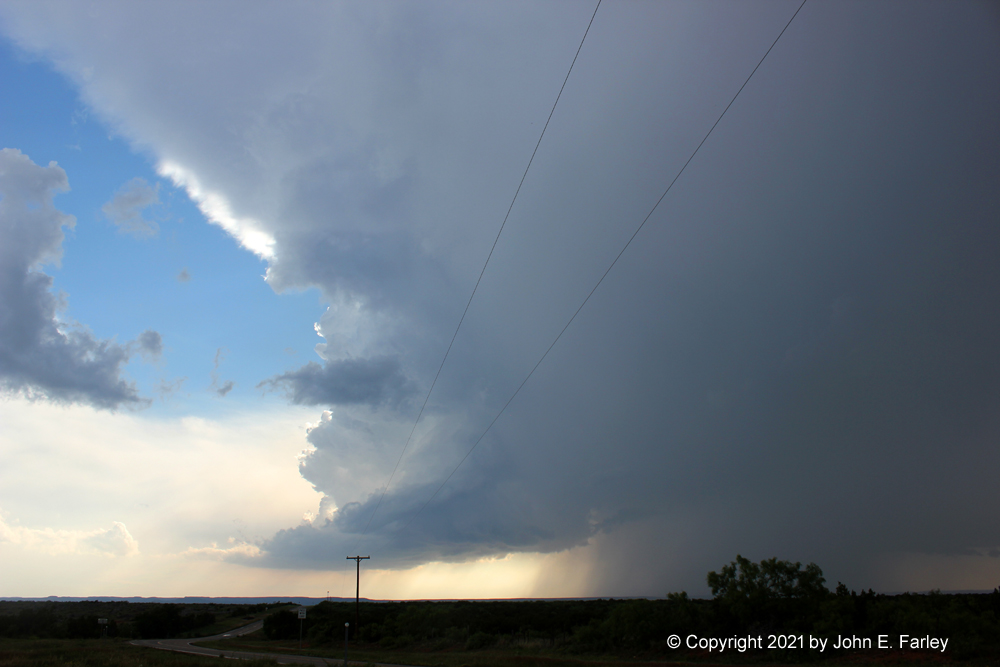 At this location, the storm was moving more or less toward me, but very slowly and it was far enough away that I could safely sit and watch for a while. I became aware that something was also happening on the other side of the storm, to its northeast side. At first I thought it was an inflow band, similar to what I had seen on the northern Panhandle storm the previous day. But intermittent lowerings formed under it, so it looked like something more than the ordinary run of the mill inflow band: 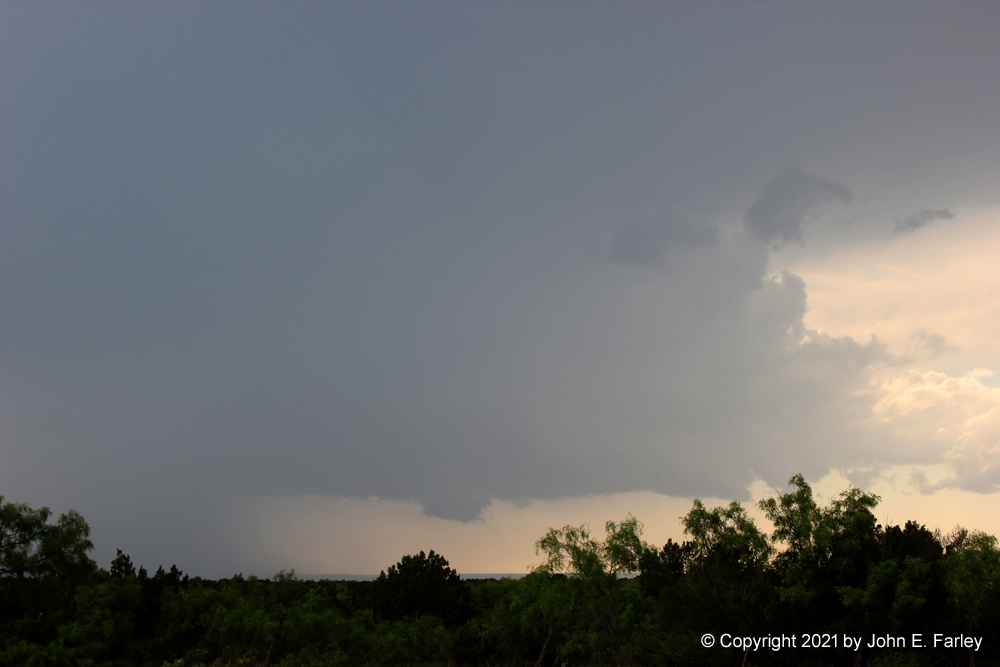 At some point, I looked at radar in motion and realized that what was really going on was a splitting supercell. This occurs when one large updraft like this storm clearly had at first divides into two, that then move in opposite directions and usually also rotate in opposite directions. The left split storm, on the north or northeast side of the storm, moves, often rapidly, to the north or northeast and rotates anticyclonically, i.e. in the opposite direction that most supercells rotate. The right split storm typocally moves more slowly to the southeast, and rotates cyclonically (i.e. counter-clockwise in the northern hemisphere) as is typical for most supercells. When these splits occur, either the left split or the right split can produce very large hail, and in this case, both splits got severe thunderstorm warnings. Tornadoes can occur with either also, but are more common with the right split. In this case, both the right and left storms did develop some visible base rotation (though I was too far away to see it in the left split), and some lowerings that briefly took on the appearance of funnel clouds, though I cannot say for sure that they were. Here is the right split at this time: 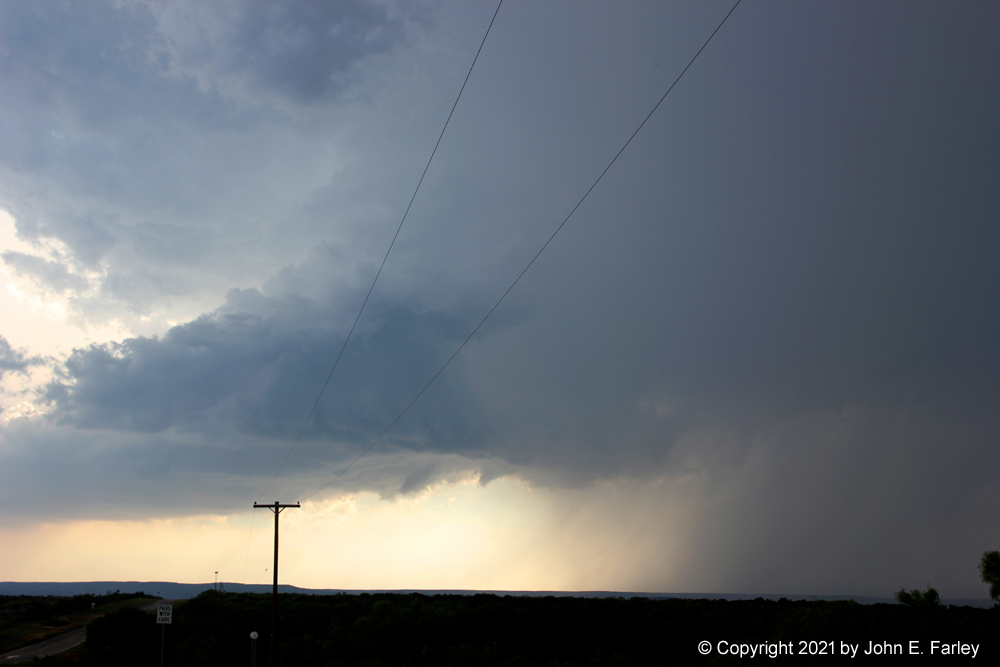 And here is the left split: 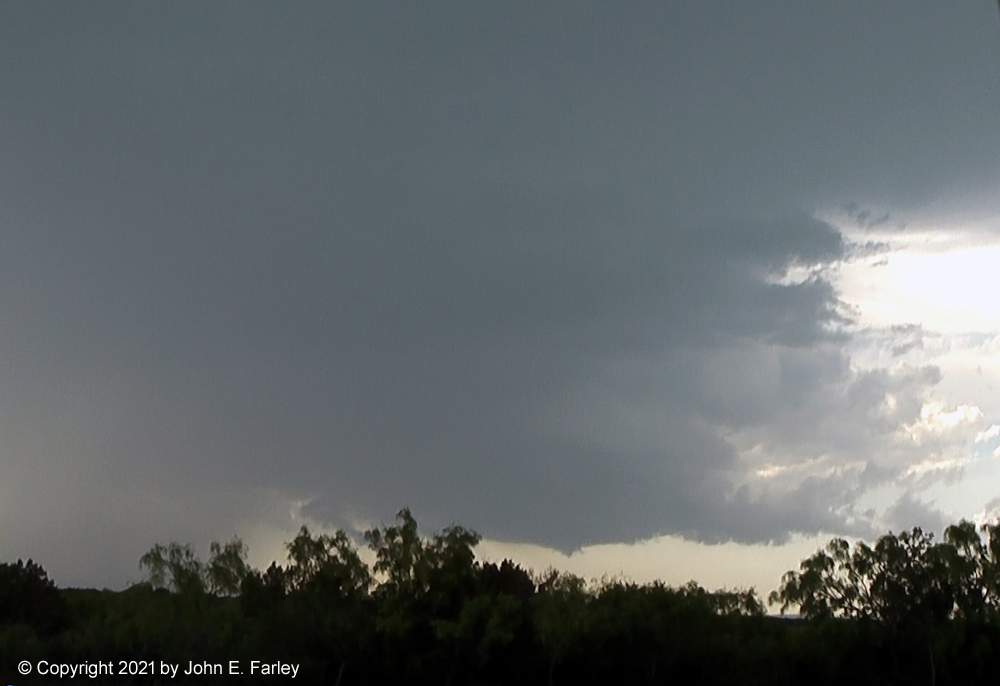 I did not have a lens on either of my cameras sufficiently wide-angle to capture both the right and left splits together, but with no small effort I was able to piece together a decent if not great photomerge from video captures grabbed as I panned my video camera:

I think that by this time the storms had split and were basically separate from each other, and both severe-warned. However, from my angle, the precipitation in the closer storm (right split) blocks part of the view of that from the farther storm (left split), so it looks like one precipitation core. But you can clearly see the two separate updraft areas, which would have almost certainly have been rotating in opposite directions. And the closer storm, the right split, was moving toward me, while the left split, farther away, was moving away from me to the north or NNE. All of these pictures of this splitting supercell were taken from the intersection of routes 70 amd 256.

Since the storm was about to overtake me in that location, I headed south toward Turkey. On a high ridge above the Red River on its north side, I came to a picnic area with great views, including of the approaching storm - and LOTS of chasers. I briefly stopped there and managed to find what was probably the one remaining parking place where I would not be blocking someone's view or video of the storm, watched for a couple minutes, and took one picture. But it was again evident that it would not be long before the storm overran me at this point, so I dropped south to the northern edge of Turkey where Route 70 runs into Route 86, and from there moved east just enough to be out of the storm's path. Once most of the storm passed, I started edging back toward Turkey, getting into rain and, a mile or two before town, into up to nickel-sized hail - with the sun shining and a rainbow. There may have even been a couple quarter-sized stones in there, but at least nickels. After a few minutes the hail ended, and I continued into Turkey, where the ground was mostly covered with hail in places. 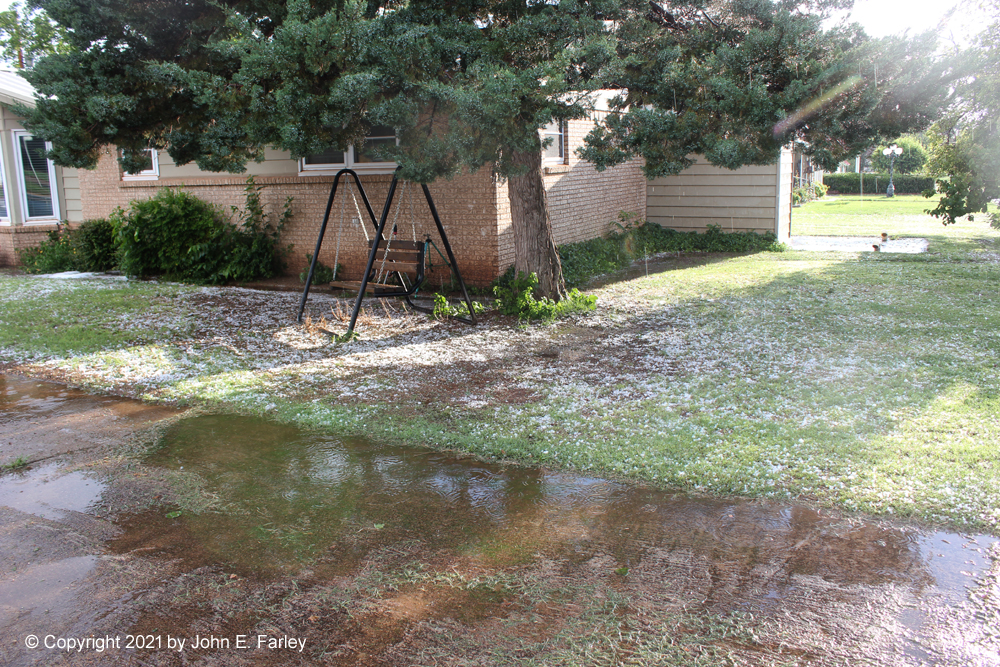 In Turkey, I found a stone or two as large as 1.25" in diameter, although a bit south of town a chaser reported 1.5" stones. By now, on the back side of the storm with it moving away from me, and within perhaps 45 minutes of dark, I knew it was time to call the chase. At this point, as I headed north toward Clarendon to find a place to stay for the night, the left split was also up that way, closing in on Clarendon, which was included in the SVR warning for that cell. However, once it crossed the cold front just south of Clarendon, the left split died a quick death. But it did have one more treat left to offer. After the updraft was completely gone and nothing was left of the storm but an orphan anvil, it produced this nice display of sunlit mammatus: 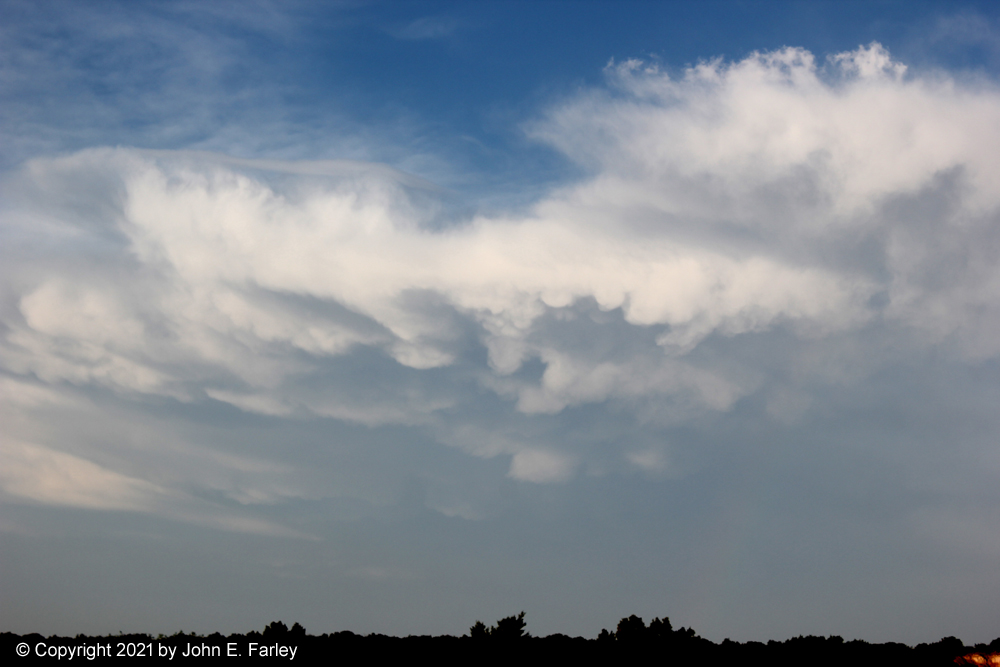 In summary, although this day offered me no tornadoes, it still ended up being a very interesting chase, including perhaps my personal best documentation of a splitting supercell.