I began this day in Clarendon, TX, where I ended up after the previous day's chase. The plan was to return to Santa Fe after a couple days of chasing in the TX Panhandle, but hopefully with some storm chasing opportunities along the way. The cold front that had surged through the plains the previous day had pushed into New Mexico as a back-door front, i.e. moving from northeast to southwest. As often happens, the front pretty much stalled when it reached the mountains of central New Mexico. When back-door cold fronts like this stall across New Mexico and Colorado, typically at or near the foot of the mountains, southeasterly winds behind the front bring a surge of moisture northwestward into the high plains at the foot of the mountains, leading to precipitation. If, as would be the case today, there is also strong upper flow from the southwest, then you get a setup favorable for supercells. There is good directional shear, with southeasterly wind at the surface and strong southwesterly winds up high. Add plenty of moisture surging northwestward and some daytime heating, and supercells are often the result. With this in mind, the SPC issued a slight risk for much of eastern NM and southwest TX. Eventually some of the TX portion would be upgraded to enhanced risk. The chance of tornadoes would be greater down there, in part due to greater instability, but my travel plans did now allow for going farther south. And tonrnadoes were not out of the question in New Mexico, either.

I went as far as Tucumcari, NM, and stopped for lunch and gas. By then, storms were starting to go up over the Sangre de Cristo Mountains, especially near Las Vegas, NM, so I decided to take Route 104 from Tucumcari to Las Vegas rather than staying on I-40. However, by the time I got to Conchas, an area with good phone/internet service, it was evident both visually and from radar that dropping south to I-40 might be my better bet, since the strongest storm by far at this time was almost due west of me and drifting to the southeast. And also since the last good road back south to I-40 is at Conchas (route 129) - beyond that road, you are committed all the way to Las Vegas. The storm would cross I-40 somewhere between Santa Rosa and Clines Corners, and it looked like I would have time to get there before it did. So I dropped back south to I-40 and blasted west. Since it looked like I would have time to observe the storm until it got close to I-40 and then cross west ahead of it, I made my first stop to view the storm at the exit for the Flying C Ranch tourist center. I watched it from there for a while, then edged another exit west. When I first got on the storm, one of the most striking things about it was this mammatus display: 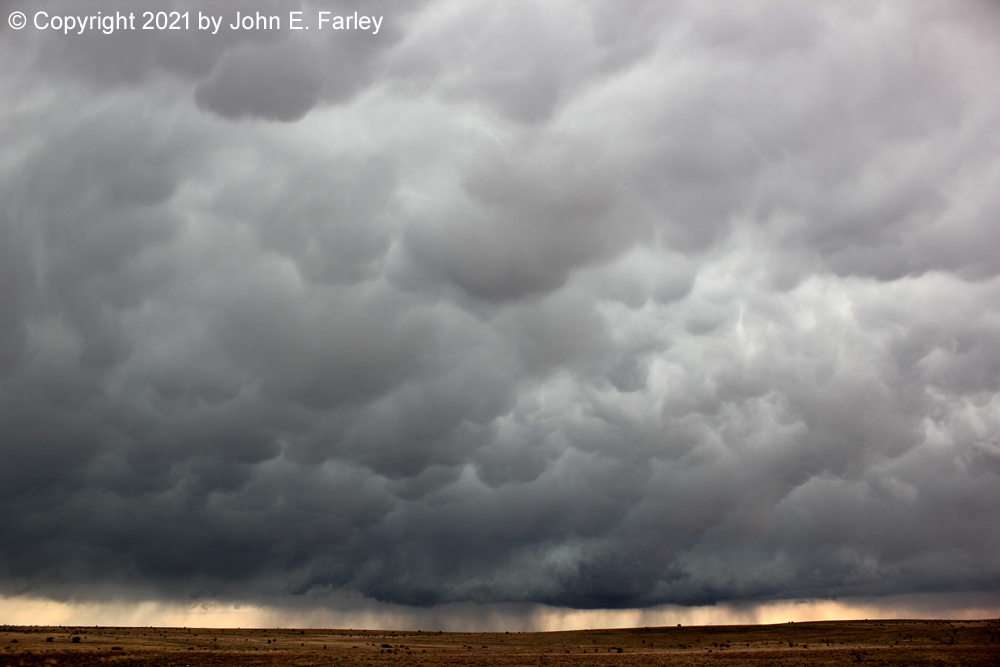 The anvil associated with this mammatus was being blown off to the ENE by the strong upper winds. Much of the anvil was associated with the main supercell to my northwest, but some was also coming from an inflow band that was coming into the supercell from the northeast, which you can see under the mammatus in the picture above. The supercell nature of the main storm can be seen in this picture: 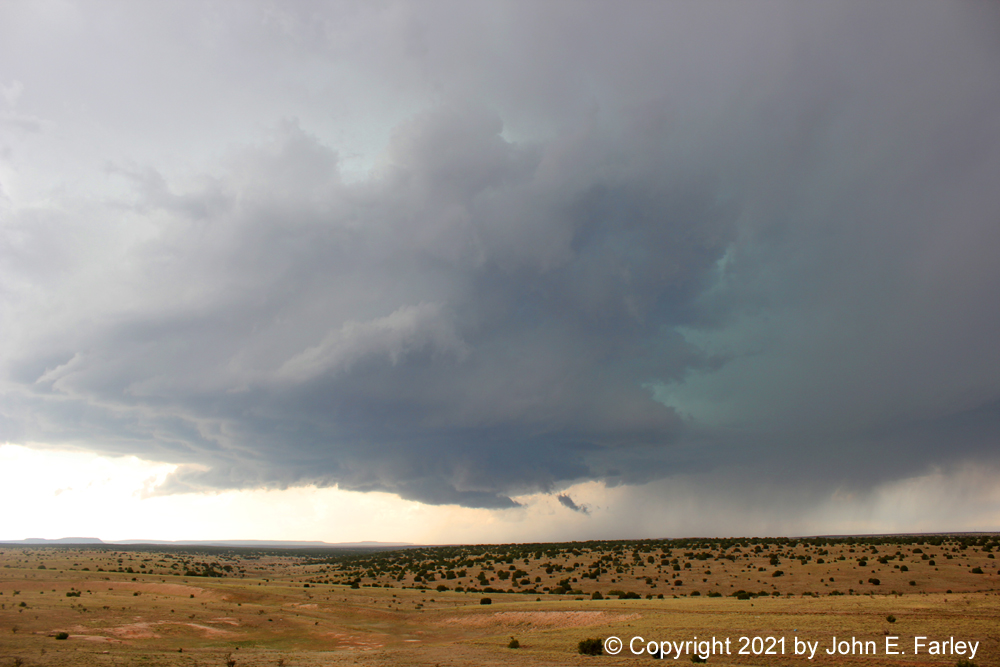 I decided to move one exit farther to the west along 40, since at the time of the picture it was clear from the movement of the storm that it was going to cross I-40 somewhere to the west of where I was at the time. At the next exit, the road that goes north to Villanueva State Park, the storm was moving pretty much straight toward me, and it had formed this rather impressive wall cloud: 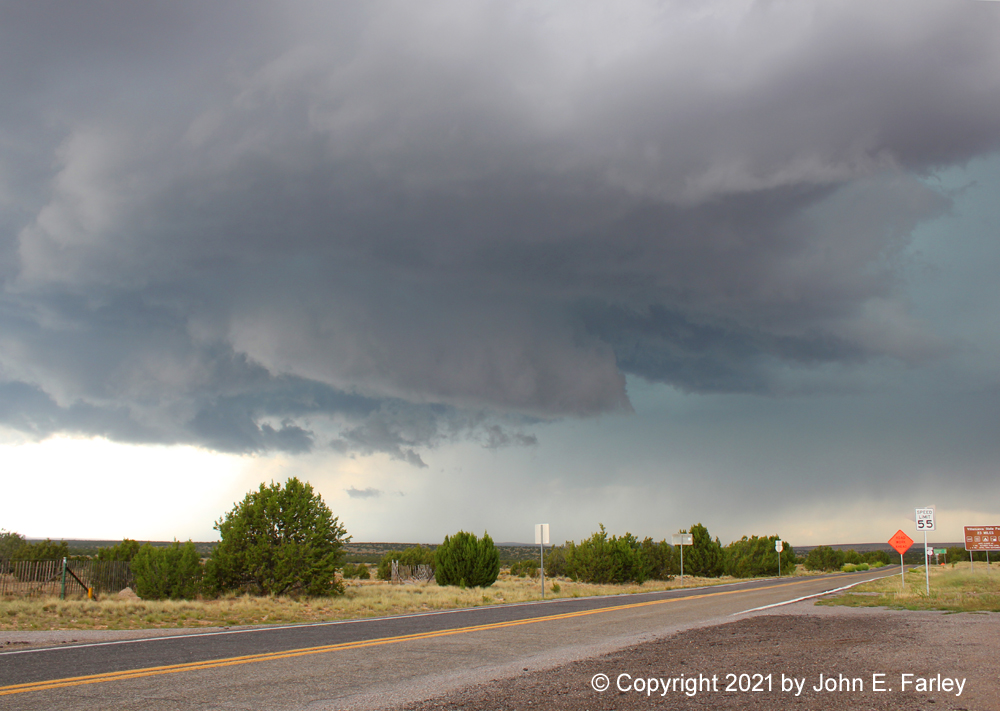 By this time, a few minutes after 3:00 p.m., the storm had earned a SVR warning, for 60 mph wind and quarter-sized hail. The warning described the storm as moving to the east at 15 mph, but in fact it was moving to the SE or perhaps even to the SSE. I stayed at this spot as long as I could, then darted west to the next exit. That location put me clearly to the west of where the storm would cross I-40, out of its path. I set up there and took more pictures and video, capturing some CG lightning strikes near the wall cloud: 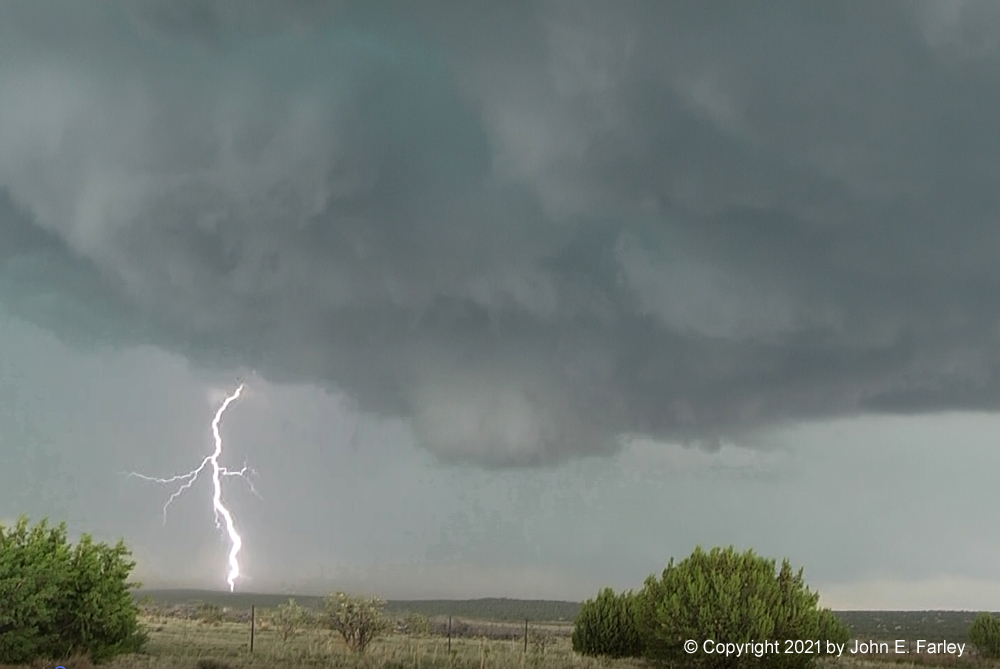 Around this time, quite a bit of dust was being lofted by RFD wind between me and the wall cloud. The hail core and RFD wind surged southeast acros I-40 as I watched. As that occurred, something interesting happened. For the past couple hours, I had been in nearly bumper-to-bumper 75-mph traffic as seemingly half of Texas headed west on I-40 for the holiday weekend to New Mexico and points beyond. But once the storm hit the freeway, that traffic went from that to nothing. As in no westbound traffic whatsoever. You can see that in this video capture: 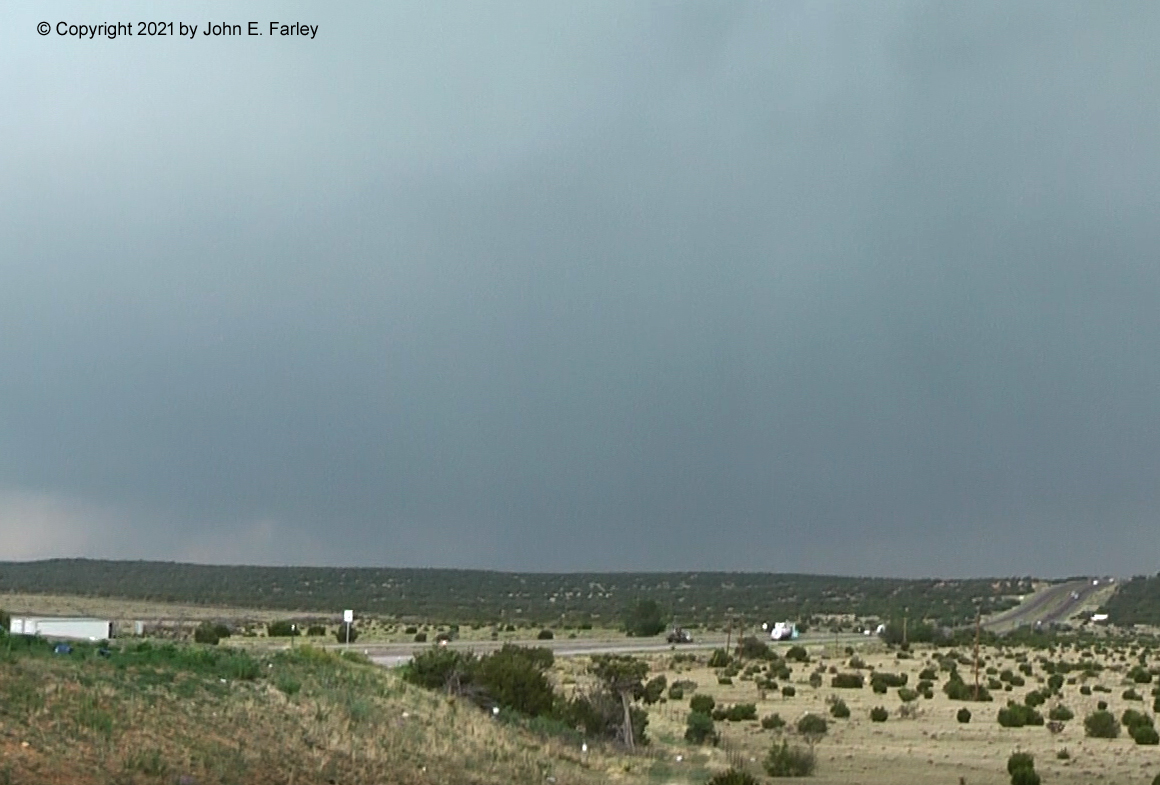 This is looking east from where I was, one exit east of Clines Corners. There is still plenty of eastbound traffic, on the right side going away from me. But absolutely NOTHING coming west toward me on the left side. Once the storm had crossed the highway, I continued on, encountering absolutely no traffic from there to Clines Corners, where I got off the freeway. It was almost surreal driving in no traffic whatsoever after being in heavy traffic up until thern. I saw no LSRs specifically mentioning I-40, but there were a couple reports of up to 1-inch hail 4 miles NNW of Milagro, which would have put it very near I-40 a little east of the Flying C Ranch. I would guess that those spotter reports came from someone on or very near I-40. I am sure there was torrential rain and quite a bit of hail when the storm crossed it, and west of that, strong wind and blowing dust. Some of the dust was lofted very high in the air. So although I was not there when it happened, I am sure it was pretty intense to totally stop the traffic like that. After 5 minues or so, the traffic began to return, and by the time I came out of the travel center at Clines Corners, it was almost back to normal. All in all, a pretty interesting day for what had been planned mainly as a travel day.

As for tornadoes, there were indeed a couple in NM, but neither would have been in reach from where I was. One was way north, a little southwest of Raton in Colfax County. The other was way south, south of Roswell. And many hail reports, not only from the supercell I interecepted but also from a number of others across various parts of the eastern plains of New Mexico. All in all, a pretty active severe weather day in NM, with more than 30 reports of severe weather.