I got on another New Mexico hailer on Wednesday, June 3, just southeast of the one a week earlier. Again today, a severe thunderstorm producing widespread hail formed over Las Vegas, NM. In the early stages of the storm, I was watching this storm and another strong storm near Los Alamos on radar. I had not planned to chase today, but decided with two strong storms this close it was silly not to. I started toward the Los Alamos storm, which by then had moved into the Rio Grande valley just northwest of Santa Fe, but a major wreck had closed the road I was using - and the storm appeared to be weakening, anyway. By then I heard the first of the five SVR warnings that were eventually issued on the Las Vegas storm, so decided to head that way instead. This meant going back through Santa Fe, where I think I hit every red light, but eventually I was out of town and onto I-25, figuring I could intercept the storm around 3:30. Around 3:00, a second SVR was issued for central San Miguel County, but the first one, for the same area, was cancelled 3 minutes later - go figure. It did look like the storm, which after sitting for a while over Las Vegas was now moving southeast, had weakened a little. I debated going after another SVR-warned storm up I-25 near Wagon Mound (where I had more or less busted the previous day) versus going southeast toward Santa Rosa after the storm I had been watching. I decided on the latter, largely because the storm was showing a very hard and distinct updraft base, with a few slightly lowered areas, while the northern storm looked OK but had an updraft tower that was not particularly hard. I think I made the right decision. 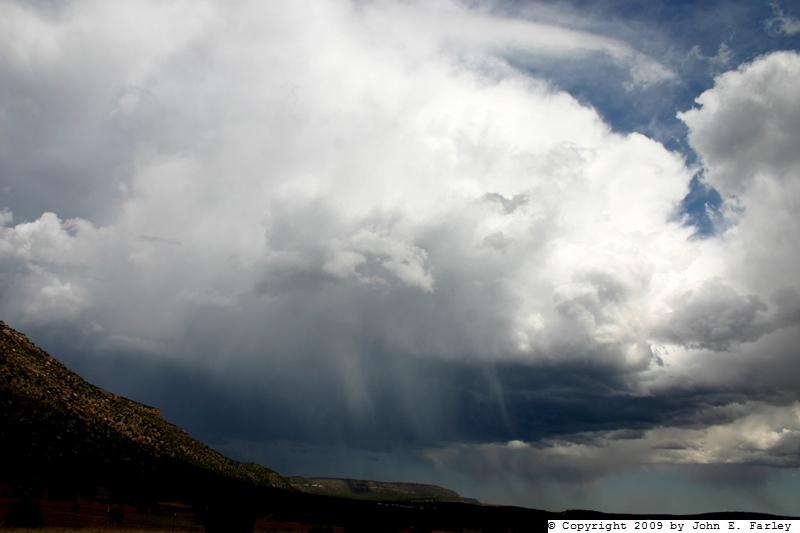 Around this time, about 3:30, a new SVR warning (the third one issued for this storm) was issued for southern San Miguel and northern Guadalupe Counties, with a severe storm with penny hail indicated about 21 miles southeast of Las Vegas. The storm was definitely looking good again, and I continued to pursue it until I could get a clearer view of it from about due west of it and where my view was less blocked by hills and mesas. The storm continued to produce new hail shafts under the north edge of the updraft, and also a hint of a developing rainfoot: 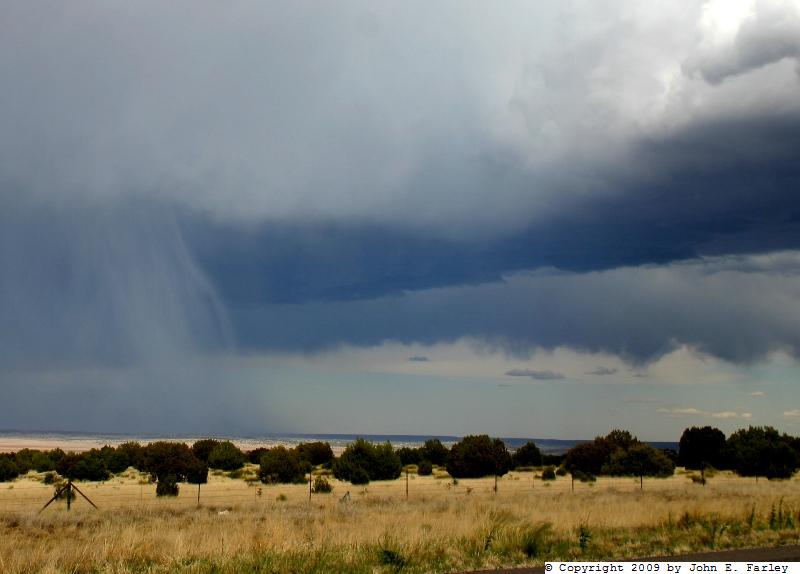 This vertically-oriented picture shows the whole extent of the storm, with the hailshaft continuing to intensify. The updraft was persistently on the southwest and south sides of the southeastward moving storm, so that at times, as in this picture, it was largely obscured (except for the western portion of the base) by precipitation and anvil debris. Gradually, the rainfoot became more pronounced, so that both the hail shafts and the rainfoot were quite pronounced: 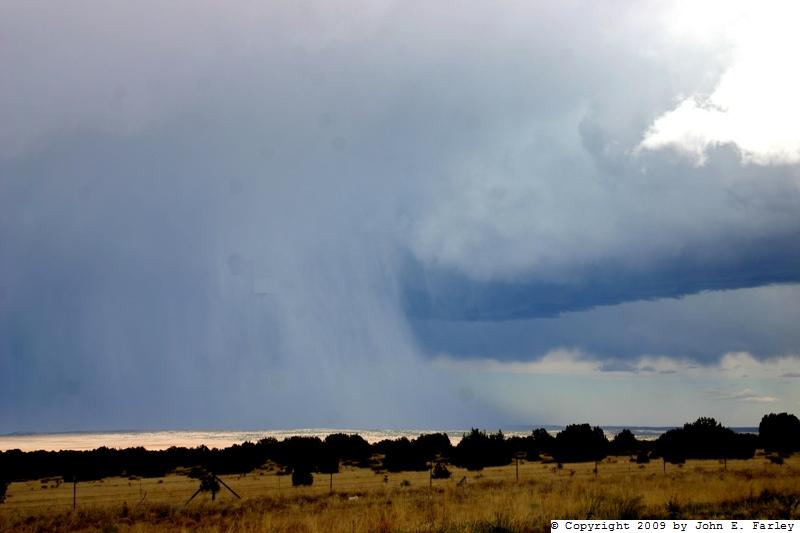 Given the height of the cloud base, I would estimate that the leading edge of the rainfoot had by now surged out at least a mile ahead of where the precipitation was coming out of the cloud, and probably more. This would indicate an increasing likelihood of strong wind, and sure enough, when the SVR was updated for a fourth time around 4:15, high wind was mentioned as a threat with the storm as well as large hail. Just before the fourth SVR was issued, I broke off and headed back to Santa Fe, figuring I would not get a better view of the storm than I had from the rather high spot where I took the picture above. The storm remained severe for a while after I broke off from it, weakend a little, then pulsed up again, earning a fifth SVR warning and producing 1-inch hail west and south of Santa Rosa. I did not see any wind reports, but during the time when the rainfoot was most intense, the storm was in a very thinly populated area northwest of Santa Rosa so there probably weren't many people that experienced the storm at this time. I did hear a report of penny hail 17 miles southeast of Las Vegas, which would have been around or just before when the third SVR was issued. There were also earlier reports of penny to nickel hail near Las Vegas. This radar image shows storm precipitation totals up to about 7 p.m.; note the long northwest to southeast track of 0.6+ precip accumulations from east of Santa Fe to southwest of Tucumcari - this is the track of this rather persistent storm, and I would guess there was some hail along much of the path, though most of the area it went over between Las Vegas and Santa Rosa is very thinly populated.

On the way back, I encountered another line of convection near Santa Fe that produced very strong outflow wind through Apache Canyon and over the ridges near El Dorado. I would estimate that I encountered a few 50-60 mph gusts in this area, undoubtedly enhanced by the terrain, then rain from around Canoncito to the southeast side of Santa Fe. Once back in Santa Fe, I was treated to a nice display of mammatus from this latter storm: 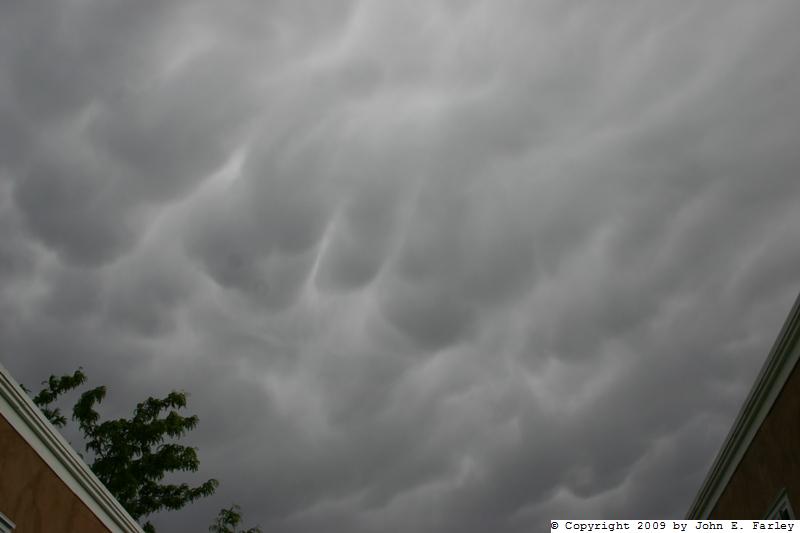