In the spirit of the notion that even a bust chase is worth reporting, and these are the kinds of chases you can learn from, I post this report.

This was a day that held considerable promise for a good chase day over northern MO, as a warm front would be stretched across Missouri, with extremely unstable air south of the front and strong directional wind shear near the front. The one potential fly in the ointment was a strong cap - a layer of warm air that could prevent storms from forming, or keep them brief and weak if they did, at least during the chasable daylight hours. Here's my forecast/analysis for the day, similar to what I wrote on the Chaser's Forum forecast page just before noon:

If the RUC even comes close to verifying, it should be a very good chase opportunity in central or northern MO this afternoon. EHI is off the top, forecast to exceed 12 by late afternoon/early evening (0-3 km) and exceeding 10 even at 0-1 km, and while the cap will be strong, both the RUC and NAM do break out precipitation near the warm front. With the combination of instability and shear near the warm front, I think supercells are a sure bet assuming storms do break out, and with that much instability and shear in the lower levels, I think the chance of tornadoes will be good. My initial target will be Columbia, and for reasons of terrain I would prefer to stay along and north of I-70 if possible - but it is entirely possible that I could have to go a little south of there. Best chase opportunities will be in the first couple hours after initiation, as the storms will likely develop upscale into a large complex.

Another factor, with both advantages and disadvantages from a chase standpoint, was the widespread and in some places heavy precipitation over much of northern and eastern MO the night before and into that morning. On the one hand, it sharpened the frontal boundary, by making the air colder on the cold side of the front. This could enhance the effect of the warm front of triggering storms and providing shear for them to rotate. But it also meant it would take more sun and warming to break the cap. Still, around 4 p.m., SPC issued a large tornado watch covering most of central and northern MO and much of southern IA.

As it turns out, the cap won out. As the day went on, the models gradually delayed the initialization of precipitation and pushed it back to the northwest, farther from the area of best dynamics. When I got to Columbia, I knew I needed to farther north, and maybe west. I pushed north to Macon, then west to Callao. Storms went up in far northeast KS, extreme northwest MO, and extreme SW IA - actually just out of the watch area. They were away from the best dynamics so had little chance of producing tornadoes. Finally just after 6 p.m., a couple storms went up west of Carrolton and west of Chillecothe, near one of the areas of best instability and shear near the warm front. In this general area, the supercell composite index was a whopping 28 and the significant tornado index in the 5-6 range, also quite high, according to the SPC Mesoanalysis Webpage. So, I thought, perhaps, game on!

I was about 40 miles east of the northern cell, so I blasted west to Chillecothe for an intercept. It looked a little better on radar than the southern one, but by the time I got to Chillecothe the southern one was looking really good visually. Both had backsheared anvils, and the southern one an overshooting top, too. So I headed south for an intercept. But both storms looked better from a distance than they did up close, and the southern one began to rapidly weaken by the time I got on it, as the northern one had done a few minutes earlier. I followed the southern storm back to near U.S. 36 a little south of Laclede, but by then it weakened. Another storm had popped up over Carroll County near where the first one did, though, and offered me my one and only decent photo op, just before sunset as my chase opportunity was about over: 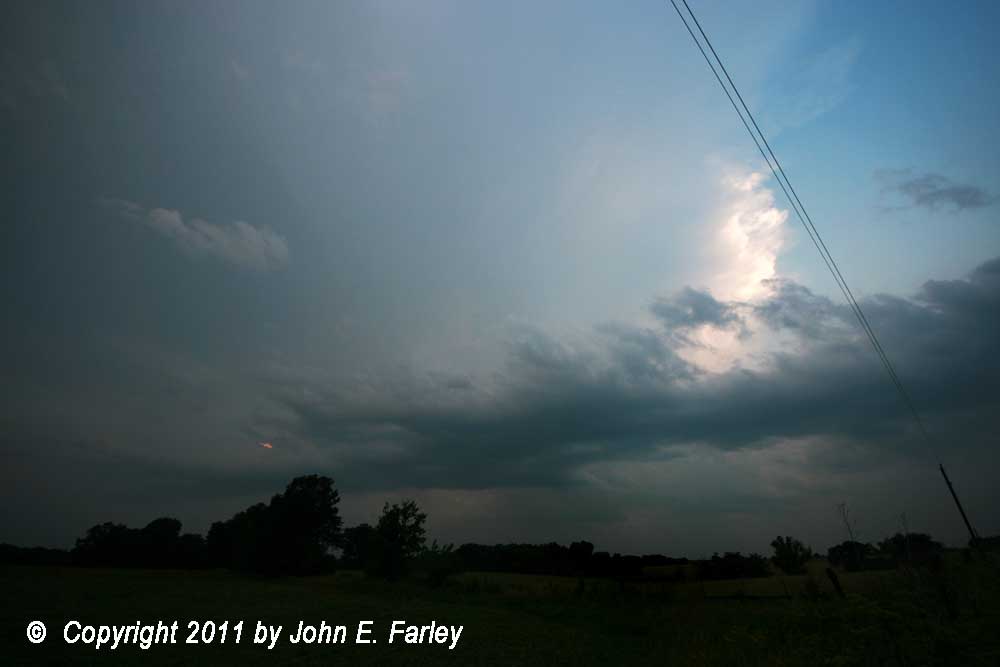 Near where I took this picture, I chatted with a local chaser who mentioned seeing the TIV earlier and pulled out his smart phone and showed me a couple pictures of the TIV and of him with Sean Casey. I did notice quite a few other chasers wandering the area, hoping for something to happen. But it didn't. That was it for daylight. I started back on the three and a half hour drive to Edwardsville, knowing the chase was over. Two hours after sunset, around 10:40, a tornado did finally occur northeast of Brookfield, within 10 miles of where I had been during the chase, on yet another storm that formed over Carroll County after the one shown above. The storm that eventually produced the tornado got together with a couple other storms shortly after it developed, to form a large cluster.Eventually, the original, southern, storm in this group became supercellular for a little while, leading to the brief tornado. The upper wind fields were strengthening after dark, and perhaps with a little help from the lower-level jet, which intensifies at night, that storm was finally able to keep the tornado watch from being a complete bust. But being well after dark, it was far to late to keep my chase from being a bust.

I'm not sure what the lesson is here, unless it might be don't bother with too long a chase if the cap bust potential is substantial, which I knew it was. But these are also the kinds of days that, with slightly different conditions, can produce big time, and you have to take a chance on them sometimes. Anyway, while I am not sure what the lesson is exactly, you can take from this whatever you find useful. Not much, in terms of photo ops or chances to see a good storm, however.