I intercepted, or perhaps more accurately, got intercepted by the bow echo that moved across southern and eastern Illinois today, encountering hail and wind that I would estimate was at least 60 mph along I-64 near the Kaskaskia River. Here's the story:

The setup: The day looked like it held fair potential for severe weather across much of Illinois, though a low probability of tornadoes. The amount of instability would depend on the effects of overnight and early-morning convection, but as it turns out, this stayed mostly northwest of I-55, allowing the airmass over eastern and southern Illinois to retain its instability. A surface low was crossing from northern IA and southern MN into Wisconsin, with a warm front eastward near the WI/IL border. A feature widely-described as a cold front extended southwestward from the surface low across MO, but I would describe it more as a dryline, since there was little temperature difference across it; rather the difference was in wind direction (southerly ahead of it, southwesterly behind it) and moisture, with very moist air ahead of it and much drier air behind it. The real cold air was behind a secondary front, approaching MO from NE and not due to reach the STL area until midnight, well after the leading front/dryline. Ahead of the leading front/dryline in IL, especially in areas unaffected by the overnight storms, the instability would be good and there would be plenty of speed shear for severe storms, possibly including supercells. But since the upper winds, although strong, were south-southwesterly, it did not appear to me that the tornado potential would be very high, except way north near the warm front, probably in southern Wisconsin, which was not an option for me. The one possible exception in my aera would be if a storm locally encountered greater shear by crossing an outflow boundary or something similar, but overall the tornado potential in central and southern IL appeared rather low.

Since I had several things to do, including a mid-day doctor's appointment a half hour or so from home, I didn't really look at weather after my initial morning review of the setup. I got home from the doctor's appointment around 2 p.m. and, checking radar, was surprised to see already two severe-warned storms, both discrete cells, moving from south of St. Louis toward the Mississippi River to cross into Randolph and Monroe Counties, IL. So, with no time to check data any further, I quickly loaded the gear in the car and headed for an intercept. I did not even realize at the time that a tornado watch had been issued for much of Illinois and eastern MO, and when I found out, was a little surprised since the setup had seemed more conducive for other modes of severe weather than for tornadoes. After some debate on the best intercept strategy, I decided to meet the storms along route 4 between Mid-America Airport and Mascoutah. By the time I got there the two discrete cells had merged into a short line, with other storms rapidly developing to the southeast. As you can see in the two pictures below, the storm had a nice shelf cloud at this time: 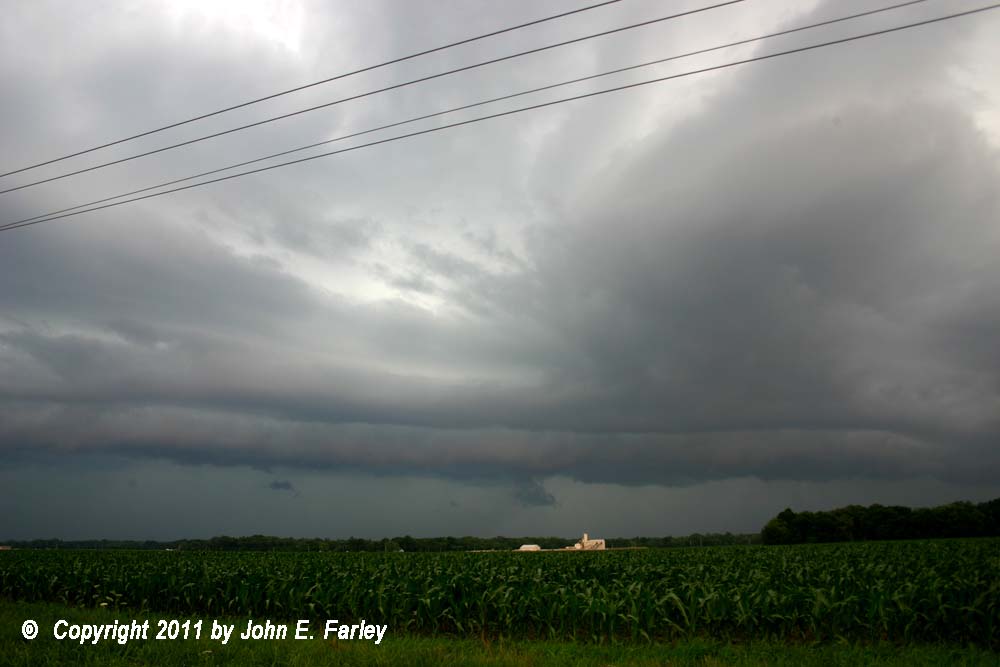 Around this time, though, the SVR warning for this storm was allowed to expire, but the new line segment extending to the SE from just south of Mascoutah had a new SVR warning. Also, a discrete cell had formed just to my southeast, slightly east of Mascoutah, and was rapidly intensifying. I could see a lowered base off in the distance south of the new cell ahead of the line, but could not tell whether it was a wall cloud associated with the new cell or a lowered area in the shelf cloud of the line behind it. Turns out it was the latter, but I could not see it well enough in the distance to tell at that time. I decided to blast ESE on I-64 to get to the other side of the new discrete cell for a better view of the area of interest. I knew I would have to punch through part of the cell and might encounter some hail, but thought I could get to the other side well ahead of the line and get a good view of the area under the updraft of the new cell and of the line to the south.

Turns out I was right about encountering the hail, but wrong about being able to stay ahead of the line once I punched through the individual cell ahead of it. Near New Baden on I-64, punching through the individual cell, I encountered a barrage of hail - not sure how big it was, but I think it was somewhere in the dime to quarter range. This was around or just before 3:40. After being slowed by traffic where people stopped under an overpass, I managed to break out of the core, but could see that the line was now rapidly surging northeast, as it evolved into an intense bow echo, and was nearly on me. I was not going to be able to outrun it, as I had originally thought. Within a few minutes, a low, violently churning shelf cloud was surging over the highway a mile or so in front of me, and soon I was getting blasted by intense southwesterly outflow wind. With my usual impeccible timing, I had managed to get myself into this situation just where I-64 crosses through 3 or 4 miles of dense woods along the Kaskaskia River. Leaves, twigs, and small tree debris were soon flying through the air everywhere, and as the back of the shelf cloud reached the road, intense near-horizontal rain hit as well. I think this was around or just before 3:50. For a couple miles, mostly just east of the Kaskaskia River, the twigs, leaves, and debris were flying everywhere, and one rather large branch crashed into my passenger door with a loud bang. Somewhat to my surprise, when I checked later, I found that it had made no dent, so I guess it sounded worse than it was. Nonetheless, the wind here was, I am quite sure, as strong as or stronger than anything else I have been in this chase season, probably 60 mph or stronger. Indeed, when I passed back through later, there was one stretch of a half mile or so where the shoulders of the freeway were pretty much covered with green from all the branches, leaves, etc. blown down, and there were numerous small branches a few feet long down all over the place. A little farther along, there was another stretch of a mile or so with lots of leaves and tree debris all over as well, though not as dense as the earlier spot. There were lots of reports of wind damage and hail across Washington, Clinton, and far southeastern St. Clair Counties, so I think what I saw was pretty typical of the most intense part of the storm as it evolved into a northeastward surging bow echo that eventually pretty much crossed the entire width of Illinois. Here is a video capture of some of the flying tree debris: 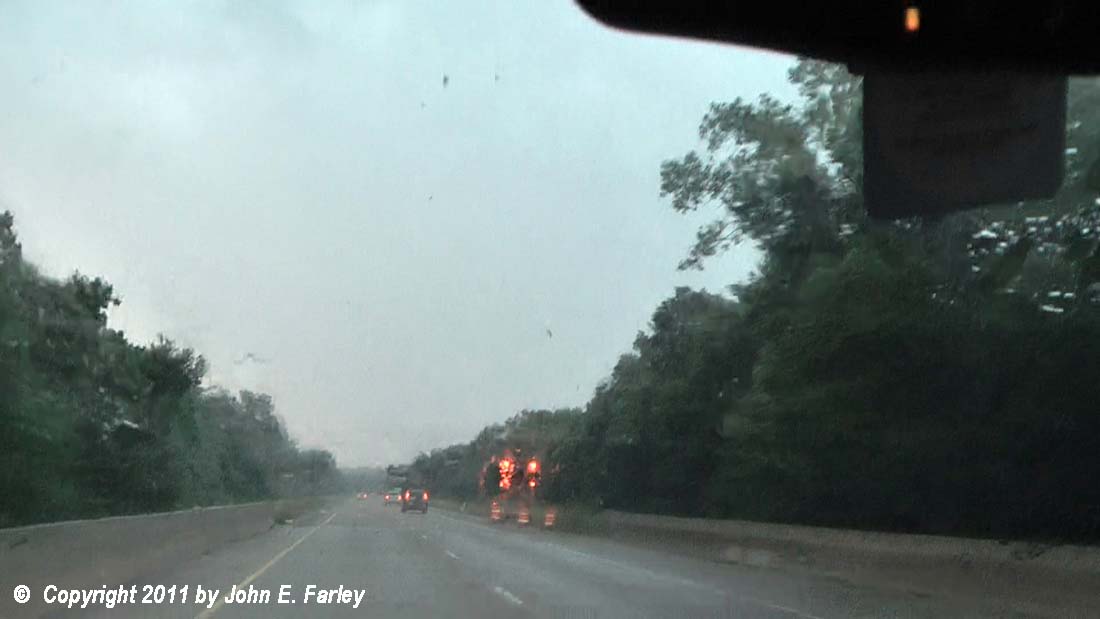 At times there was a lot more than this, and I did try to get video, but in the chaos of driving in such conditions I thought I had hit the record button but had not, so the capture above is actually from right after I had tried to turn recording off to concentrate on driving, but actually that was when I turned it on. I did get some video of the earlier hail, but that was not a big deal compared to some of the other hail video I've gotten this year. You can also see that I was driving in the left lane, because I figured that if a tree fell, it would land in the right lane - and also it was better for geting around people stopped under the underpasses.

I stopped in Okawville and waited for the worst of the storm to pass over. Got a little video of the wind-driven rain there, but it was not nearly as intense as what I hit near the Kaskaskia River. Overall, I would say that this was quite an exciting chase in terms of what I experienced and got to see, but not terribly productive in terms of pictures and video. Would have been a lot better if I had succeeded at getting video of the outflow surge and flying debris. Once the worst of the storm was over, I headed back up I-64 and then north on route 4 to try to intercept some isolated, slow-moving storms moving into Macoupin County from Jersey County, but by the time I got to northern Macoupin County these storms had weakened, and I called it a day. As I had thought in the morning, the lack of directional shear made this day's tornado watch a bust as far as tornadoes are concerned, but severe weather was very widespread across southern and eastern Illinois, as the bow echo surged northeast and east across the state to Indiana. The storms also caused extensive problems, including the cancellation of hundreds of flights, in the Chicago area.