Around 3:15 p.m., I noticed via radar that some strong thunderstorms had developed west of Pagosa Springs, basically between Pagosa and Durango, so I decided to head out and see if I could get any lightning pictures. But once I got out, I could see that 1) to get to those storms along U.S. 160, I would have to go a little farther than I had initially thought and 2) a new and small but strong updraft base seemed to be forming almost overhead, just to my north or northeast. This seemed to already be forming an anvil, though it did not look like there was much if any precipitation yet. So I stayed where I was, near the Elk Park area southwest of Pagosa Springs, and got a few pictures. It took on something of the appearance of an LP supercell, though I am not sure whether there was really any significant rotation in the updraft. Here is a panorama photomerge I made from several of the pictures of it that I took from this location around 3:25 p.m.:

I decided to stay with this newly-forming storm and went back toward Pagosa a couple miles to the Parelli entrance, and took some more pictures there. I figured the cell was only a little east or northeast of me at that point, and that if I went back to Pagosa Blvd and headed southeast from there, I could get under the cell and see what it was producing. From its appearance, I thought there was a pretty good chance of hail, so I might have an opportunity to get some hail video without getting into hail big enough to damage my car. That is pretty much what happened, as I headed southeast on S. Pagosa Blvd and then Bristlecone Drive. I started getting into big raindrops and then soon after, hail, along Bristlecone Drive. I continued to a place with a good open view where I often go for storm photos, with the hail continuing. I almost got ahead of it, but almost as soon as I stopped the hail increased. It ended up lasting for around ten minutes, centered roughly on 3:50 p.m., pea-sized at first but then increasing to a half-inch in diameter and beyond, with the largest stones around the size of dimes (.70").

After the hail stopped it rained hard for a few more minutes and the hail melted fairly quickly, but one the rain let up I found a stone that was still a half-inch in diameter, even after quite a bit of melting (the majority of the hailstones were completely gone by then), so I would guess this would have been as big as the dime when it fell: 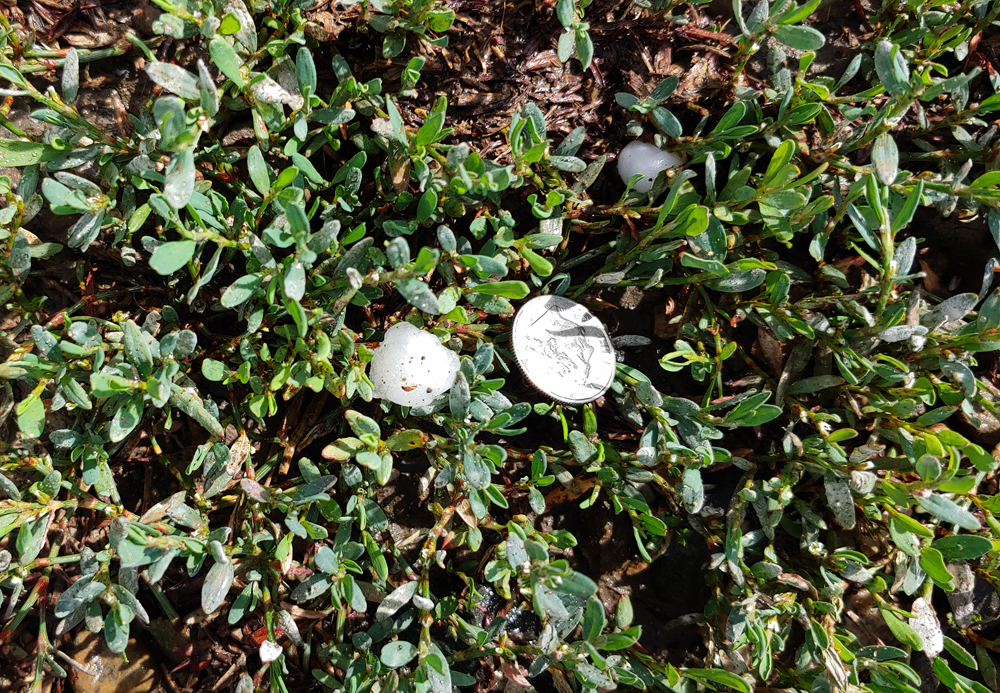 Interesting, despite the hail, I did not encounter any lightning or thunder with this cell. There may have been some, but if so it would have been while I was driving, but I am not sure there was at all. If there was, it was not much. At this point I could see that another storm was forming to my north. I headed back to 160, not sure which storm I would go after next. When I got there, I decided to go back west on 160, as the original complex of storms I had started after was still going. In fact, those storms were also producing hail, and a special weather statement had been issued for them around the time I decided to go after the nearer, newly forming storm. But now I thought I might be able to get some lightning shots with Chimney Rock in the view, so I headed down to the intersection with 151 where you turn south to go to Chimney Rock National Monument. Unfortunately, the storms were really too far away to get lightning shots, but I did get a few pictures of the storms, along with some mammatus, with Chimney Rock in the foreground. Here is one of those: 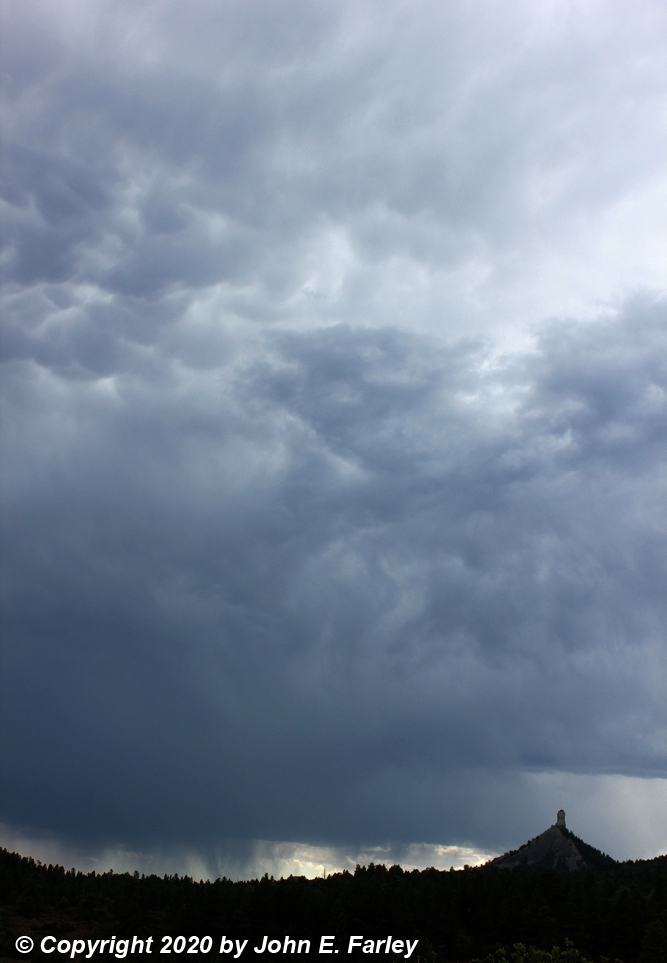 After getting a few pictures, I headed back toward Pagosa and could see now that the storm that had formed behind the initial one there had now intensified. It took a similar track to the earlier one that gave me the hail, but just a little farther east. This one, unlike the earlier one, did have some thunder and lightning. I saw at least one flash, and later after I got home I saw quite a few strikes on the radar-lightning loop on the TV weather. This storm appeared to have a hail shaft on its back edge, though likely a narrow area of sunshine hitting the precipitation enhanced that appearance. However given its intensity and the fact that both of the other two storms produced hail, I think it is likely that this one did, too. Here is a picture of that storm, taken looking east from near the entrance to Parelli: 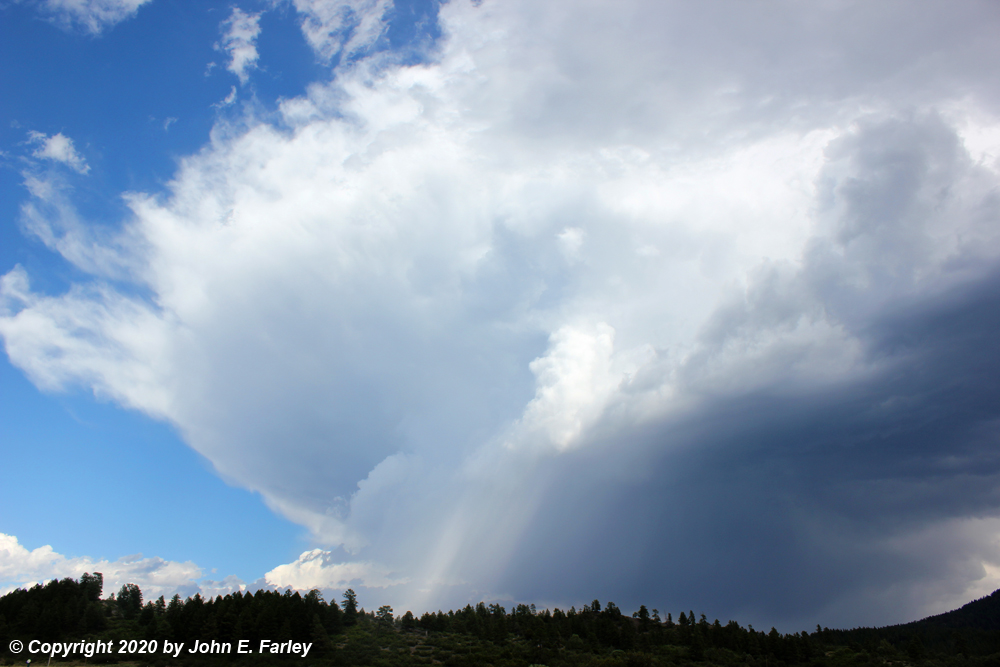 So, I saw three rather photogenic storms and got some decent hail video. Not bad for never getting more than about 15 miles from home.