As an upper low tracked from northeast Iowa toward Lake Michigan and a cold front advanceced southeastward across Illinois, I kept an occasional eye on the weather for a possible storm observation opportunity. Most of IL and extreme eastern MO was in an SPC slight risk area, and by shortly after noon, a severe thunderstorm watch was issued for central and notheastern IL generally north and east of Bloomington, as well as parts of Indiana and southern lower Michigan. I figured that if the storms built further southwest and began to develop south of I-72, I would head out. By around 2:30, this was beginning to happen. I checked the SPC mesoanalysis Web page and saw that some of the best instability, CAPE around 2000, was actually to the southwest of the severe thunderstorm watch. This band of instability extended roughly NE and SW through the St. Louis area. Storms developing in west-Central IL south of I-72 would be moving into this area, so a chase seemed worthwhile. There was a little directional shear, with surface winds from the W to SW and upper winds from the NW, but the wind fields were weak. For this reason the chance for seeing a tornado would be very low, but the storms seemed to be staying discrete, probably due to the slightly ill-defined nature of the cold front. A sharper front would have quickly caused the storms to line out, as often happens in Illinois, but with this more diffuse front and a little directional shear, they seemed to be staying discrete. Also the usual haze was lacking, perhaps due to the secondary character of the approaching front, as an earlier diffuse boundary had cleared out some of the juiciest air. This meant that visibility would be good. With discrete storms and good visibility, I figured there would be some decent photo opportunities, and I was right.

There were two possible opportunities that looked reasonably interceptable. One was a cluster of storms developing a little west of Jacksonville, along I-72. Another was a more isolated storm farther to the SSW. At this time the storms were moving to the east at around 25-30 mph, but gradually over time they turned to the right and moved more to the ESE. I decided to head up I-55 to the Carlinville area where I could make a play on either one. As I could see the storms visually and watched them on radar, it was evident that the storms around Jacksonville were stronger, and the tail-end storm that went right over Jacksonville was looking good both on radar and visually. A couple storms farther up the line west and north of Springfield got SVR warnings first before the one I had decided to target, but by the time I reached the Farmersville exit, from where I figured I could easily head west and intercept the storm, it also had a SVR warning. (As it turns out, this storm had already begun to produce severe hail before the warning was issued, and produced golfball hail just one minute after the warning was issued.) As I exited I-55 at Farmersville, I could see that the storm, still probably 20 miles to my northwest, had a very impressive wall cloud, and I stopped to take a few pictures: 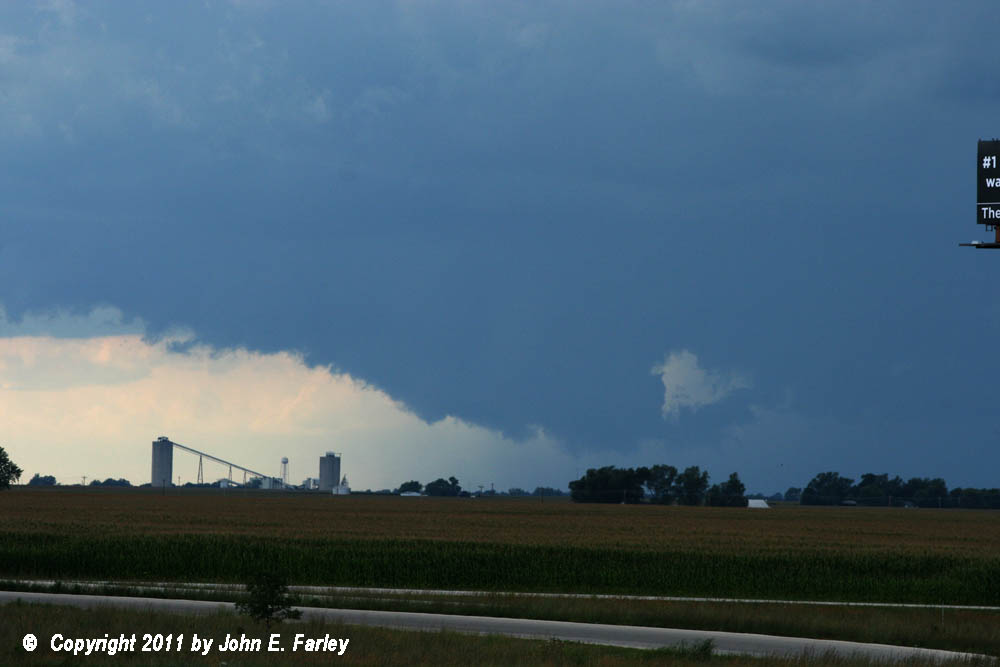 Wall cloud from about 20 miles away (taken with zoom lens) looking NW from Farmersville, IL, around 4:10 pm. This was the first of the 3 storms I was on over the course of the chase. 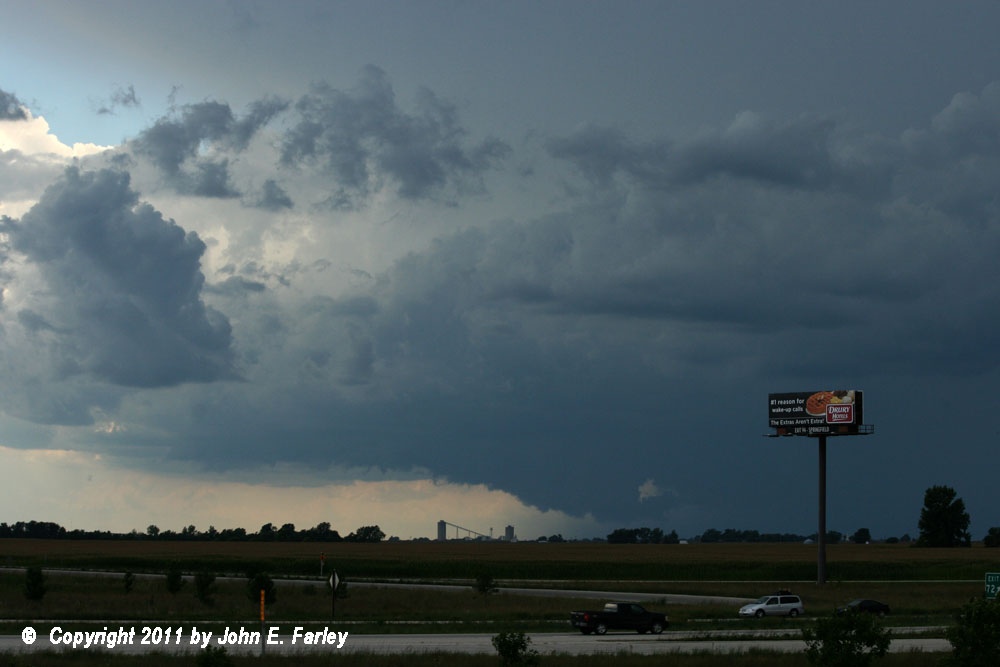 I headed west just into Macoupin County, then north for a few miles and west for another mile on a section road, ending up a couple miles southeast of Virden. As shown in the picture below, the wall cloud was now developing an inflow tail on the side toward the precipitation: 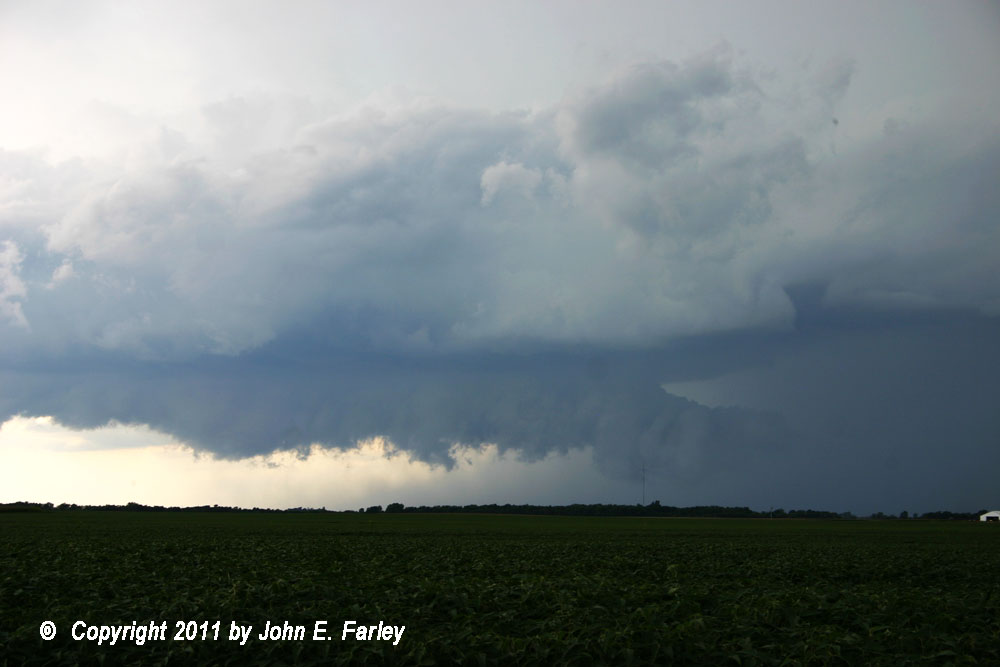 From the time I arrived at this spot around 4:25 until I left to get out of the storm's path around 4:50 p.m., the thunder was continuous. The thunder was all coming from the clouds, and I did not see any CG lighting - it seems to all have been in the clouds. But there must have been a tremendous amount of lightning in the clouds, because the thunder never really stopped; it only became louder or less so depending on the location of the lightning. There was also some nice mammatus in the underside of the storm's anvil to my east, as the storm moved southeast toward me and the anvil overspread the sky. By around 4:45 p.m., the wall cloud appeared to be about over Virden: 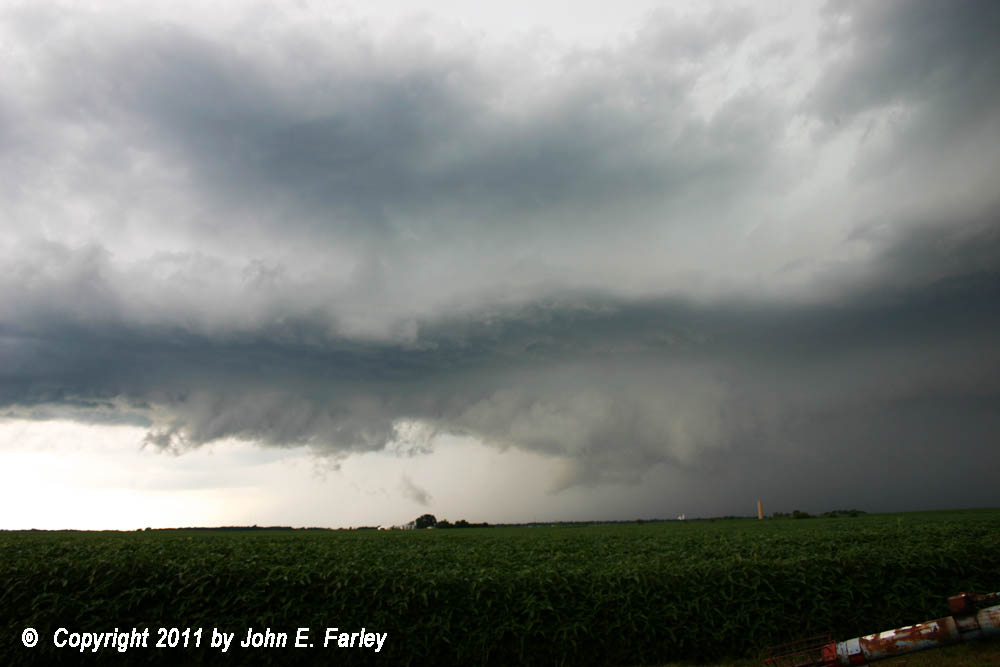 Wall cloud over Virden, IL, around 4:45 pm. Still the first of the 3 storms I was on. 1.25 inch hail reported southeast of Auburn around this time. That location would be just off the photo on the right side.

Around this time, I got a little bit of broad-based rotation in the base on video. This was really the only time I was on the storm that I could see any visible rotation, and it was broad-based and weak. By now, the storm was about to move over me, and I knew I needed to move southeast. By the time I got back to Farmersville, the storm was looking more outflowish, and radar showed the core to be less intense than it had been the entire time since I first exited I-55. However, the storm did by now have a nice shelf cloud, as can be seen in this panorama made from three pictures I took from Farmersville:

Panorama of shelf cloud from Farmersville, taken around 5:00 p.m.

After I took the pictures for the panorama above, I decided it was time to head south to intercept the next storm down the line. Somewhere between my stop southeast of Virden and my getting away from the storm entirely - not sure whether it was before or after the picture above - the leading edge of the storm briefly caught up with me and I got a quick blast of big raindrops and literally one hailstone. But mostly I managed to stay out of the core. By now, the storm to the southwest that I had originally considered chasing was nearing Carlinville, and had intensified nicely. It had a definite mini-supercell look on radar, even with a small hook. I figured I could intercept it near Litchfield, taking old route 66 to avoid constuction backups on southbound I-55 and giving myself more directional options. The storm turned right somewhat and I got in some heavy rain along the leading edge in Litchfield, but managed to get south of it again south of there. This storm had an intermittent small wall cloud, and while not SVR-warned, did lead to the issuance of a special weather statement for nickel-sized hail and 50 mph wind. Just to my west, a new, intense precipitation shaft formed just as I broke out of the rain and under the updraft. Once I was south of the storm I found a good viewing spot and was treated to this: 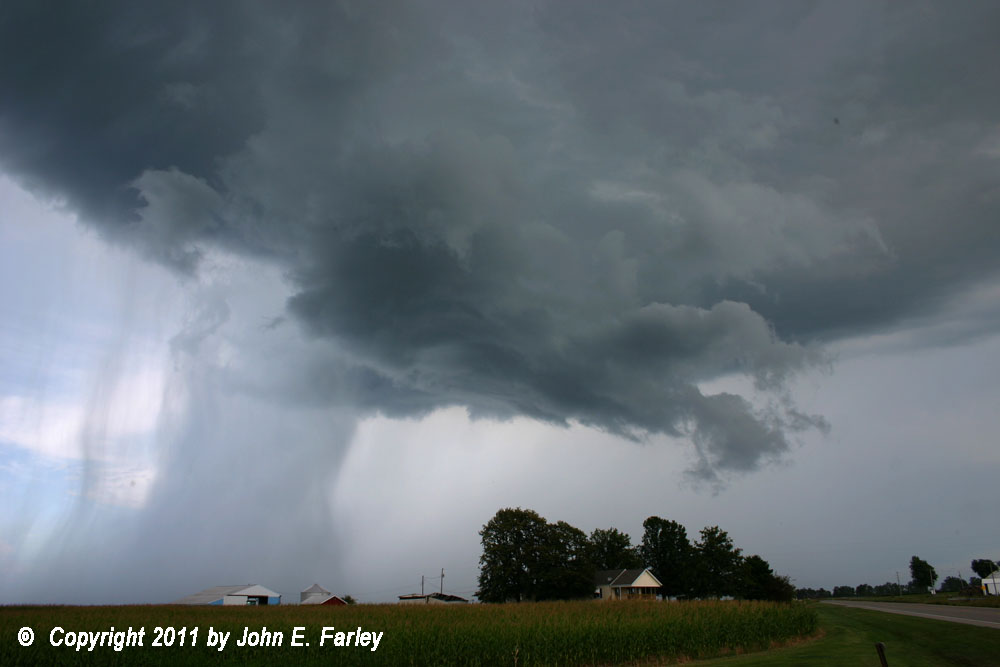 Panorama of second storm, near Litchfield, IL around 5:40 p.m.

I thought I might be done as this storm moved off to the southeast, but noticing another storm to the WNW essentially following the same path as this one, I decided to head west for a look. Unlike the others, this storm had no wall cloud, just flat updraft base, but the precipitation core looked pretty intense. I dediced to head north on route 4 through Benld and Gillespie to see if the storm had put down any hail accumulations. I didn't find any, but I am glad I did this, because heading back east toward Litchfield, I was treated to one of the best sights of the day: 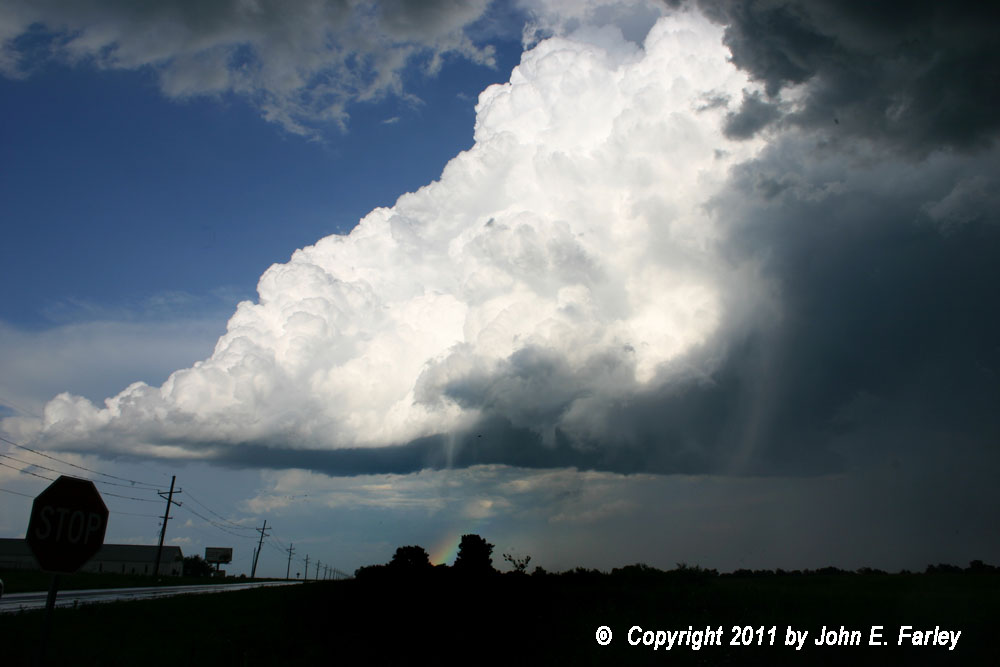 Third storm with rainbow. Picture was taken from between Gillespie and Litchfield, IL around 6:10 p.m. as the storm produced heavy rain and small hail in Litchfield.

This storm also led to a special weather statement for strong wind and up to nickle size hail. It didn't produce any hail that large so far as I know, but did drop some pea-sized hail in Litchfield, according to NWS St. Louis local storm reports. Heading for home from there on I-55, I encountered big raindrops and maybe one or two hailstones on the far western edge of the storm, but as was the case all day, I managed to avoid the main precipitation core. I stopped at the Staunton exit for a few last pictures looking north at the storm, and managed to get a couple shots I used to make this panorama. All in all, a very enjoyable little chase. Not only were the storms discrete and visibility good, but with the slightly high-based nature of the storms you could see them well and get good pictures from quite some distance away - rather unusual in Illinois. And all this with less than 150 miles of driving!

The only letdown of the day came when I arived home and, after dinner, heard about the tragic loss of life at the Indiana State Fair. The storm that caused the stage collapse there was part of the same complex of storms that I had been observing, although the portion of the complex that eventually moved over Indianapolis was farther up the line from where I was, i.e. somewhere northeast of Springfield, possibly the part of the line that passed through the general areas of Peoria and Bloomington, IL, more or less moving along the I-74 corridor.