With a good supply of monsoonal moisture flowing into New Mexico ahead of an upper low moving eastward across northern Arizona and a back-door cold front trying to push southeastward across New Mexico, I thought that the potential for storms would be good, and in the clear, bright air of New Mexico, the storms are often very spectacular and photogenic, even if they are not severe. By early afternoon, the air had destabilized across southwestern New Mexico and also along a narrow band near and just east of the central mountains, with a strip of 1000 CAPE stretching across the length of the state from north to start. The RUC was suggesting some of the stronger storms would form somewhere around the Clines Corners area, and already storms were starting to break out. I decided this would be a good day to head out and do some storm photography, and I was not disappointed.

I headed out from Santa Fe as a broken line of storms set up from between Santa Fe and Las Vegas, NM in a curved band extending southeast to east of Clines Corners then south and southwest to west of Vaughan. The strongest storm was southwest of Vaughan, and I started out with the idea of intercepting this one. However, another one between Santa Fe and Las Vegas, not far to my east, was intensifying while the one near Vaughan began (temporarily, as it turns out), to weaken. So I decided to go for the intensifying storm that was much closer, about 30 miles away as opposed to more like 90 miles. Although the Vaughan storm re-intensified and eventually got a couple of SVR warnings, I doubt I could have done better from a photographic standpoint had I gone after it.

The storm between Santa Fe and Las Vegas pulsed up to its maximum intensity as it moved over the Sangre de Cristo mountains just southwest of Las Vegas, and also just as I was approaching from the southwest on I-25, perhaps 20 miles southwest of Las Vegas. Since the traffic was very light (a nice aspect of storm observation in many parts of NM), I pulled well off the freeway and got these pictures around 2:50 p.m.: 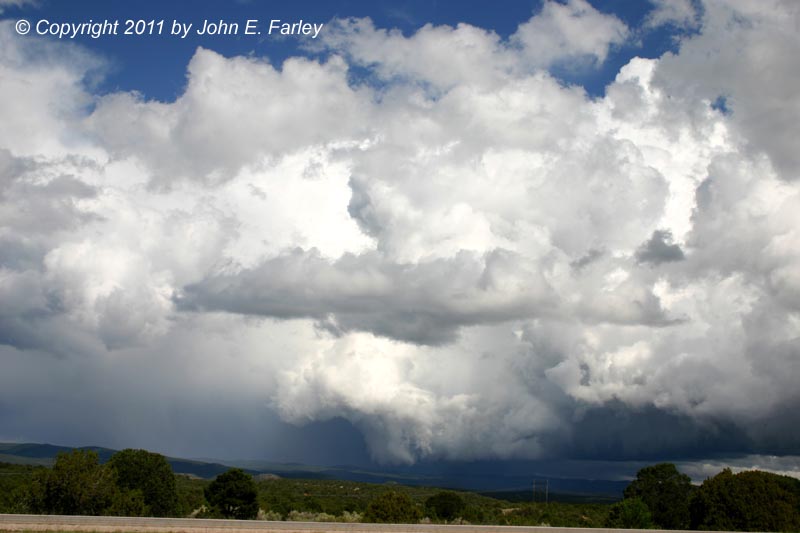 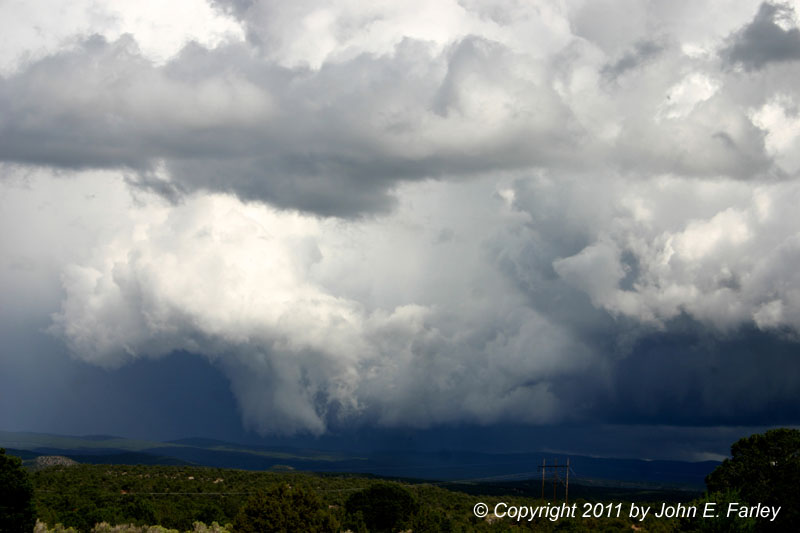 More zoomed photo of the updraft base area

A few minutes later, I pulled over briefly again to get more pictures as the main updraft tower began to get a pileous cap. Soon after this, as I continued east, my view of the top of the storm was blocked by the flanking line, so, now heading basically east, I decided to cross under the flanking line and view the storm from its front side. By the time I got to the Bernal exit, perhaps 10 miles southwest of Las Vegas, though, something else had caught my eye. I had noticed on radar that the next storms southeast of the ones I had been watching were gradually intensifying, and by the time I was approaching Bernal, my view of those storms was no longer obstructed by the mountains or low clouds. Exiting at Bernal around 3:05, I was treated to this view of the storm to my southeast: 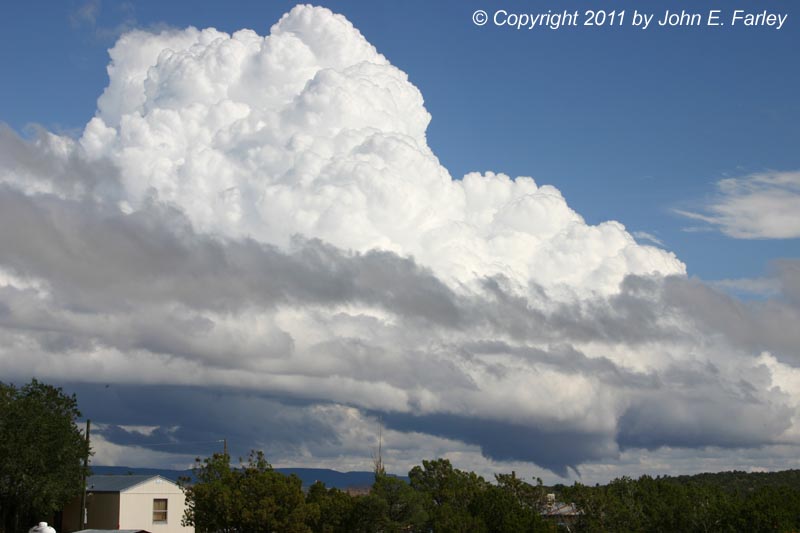 What caught my eye right away were the interesting lowerings under the tilted updraft. The one on the left was definitely scud, but I am not sure whether the one on the right was a brief funnel or also just scud. I will say this, though - it was in the right place, and and also note what looks like an RFD cut on the right side of the wall cloud-like feature the lowerings were pendant from. An interesting fact about the meteorological environment is that there was some directional shear, as upper winds were from the southwest, while the surface winds were predominantly from the south to southeast. You can see the effect of that in the tilted nature of this storm. That said, the shear was not particularly strong, although it may have been enhanced a bit in this spot by the upslope effect on the surface winds. Although you can't see a lot of precipitation in this picture, the radar showed that it was there. A more zoomed picture of the lowerings can be seen here. The lowering to the right persisted even after the definite scud to its left disappeared, but neither lowering lasted too long - I'd say the one on the right lasted maybe 2 or 3 minutes after I first saw it, but I am not sure how long it may have been there before I saw it.

Meanwhile, the storm I had originally been watching, now to my north, was still going pretty strong and had some decent structure of its own. This was about as good as it got, though. The first storm weakened once it got east of Las Vegas and past the mountains, and I did not want to try chasing the southeastern storm eastward on limited roads and in the rain from the northwestern storm which, though weakening, was also backbuilding to the southwest. Instead, I decided to return to Santa Fe and see what I could see of a series of strong storms that had prompted a flash flood warning and multiple flood advisories in the burn scar areas southwest of Los Alamos. These storms had weakend a little and become somewhat elevated by the time I got back to Santa Fe and were no longer particularly interesting visually, although somewhat later I did get some wide angle pics of these storms toward sunset, and put together one panorama:

This was taken looking west toward the Jemez Mountains from a high spot in Santa Fe.

All in all, not a bad day, and only about 130 miles of total chase distance.