Although some dry storms with gusty/dusty outflow were possible west of the central New Mexico moutain chain, it appeared until around 2:00 p.m. that most of the activity was well south of I-40 and west of the Rio Grande. However, by 2:00 p.m., when the first of many special weather statements (significant weather advisories) was issued, it appeared that the storms, which were in a more or less WNW-ESE line southwest of Albuquerque, began to surge in a more northerly direction. They would reach I-40, and soon did, and after a while the heaviest storm in the line was toward the eastern end of the line not too far southwest of Albuquerque. At 3:39 p.m. after the issuance of three more special weather statements, a severe thunderstorm warning was issued that included most of the Albuquerque area. Damaging winds were occurring well ahead of any precipitation, as the outflow surged to the northeast. And the SVR warning, like the special weather statements, mentioned the visibility effects of blowing dust for drivers on highways. I watched velocity data on RadarScope as the high winds surged through the ABQ area. I decided this might be my chance to see a haboob, or if not that, at least a decent dust storm. The weather recently had been very hot and dry, so there would be plenty of dust to kick up, and with the wind well out ahead of any precipitation, this effect would be maximized. It looked like the outflow from the storms storm was surging into the area between I-25 and the higher terrain of the Ortiz mountains, in an area south of Santa Fe, so I decided to head out to the top of La Bajada Hill, at the exit to Waldo Canyon Road from I-25.

I got to that location around 4:40. Did not go any farther because I did not want to encounter severe blowing dust on the interstate, and there are pretty good viewing spots at that exit. Dust was already blowing pretty strongly just to the south of the exit, and while I did not get a real haboob, I did get a pretty intense dust storm. Visibility was reduced to near zero just south of my location, where dust was blowing up from an unpaved road and open fields. I would estimate the peak gusts at somewhere around 50 mph, but that is just a guess. Here are a couple pictures. In the first one, you can see the dust blowing across Waldo Canyon Road just south of my location. This picture was taken around 4:40, but this blowing dust was pretty continuous for 10-15 minutes: 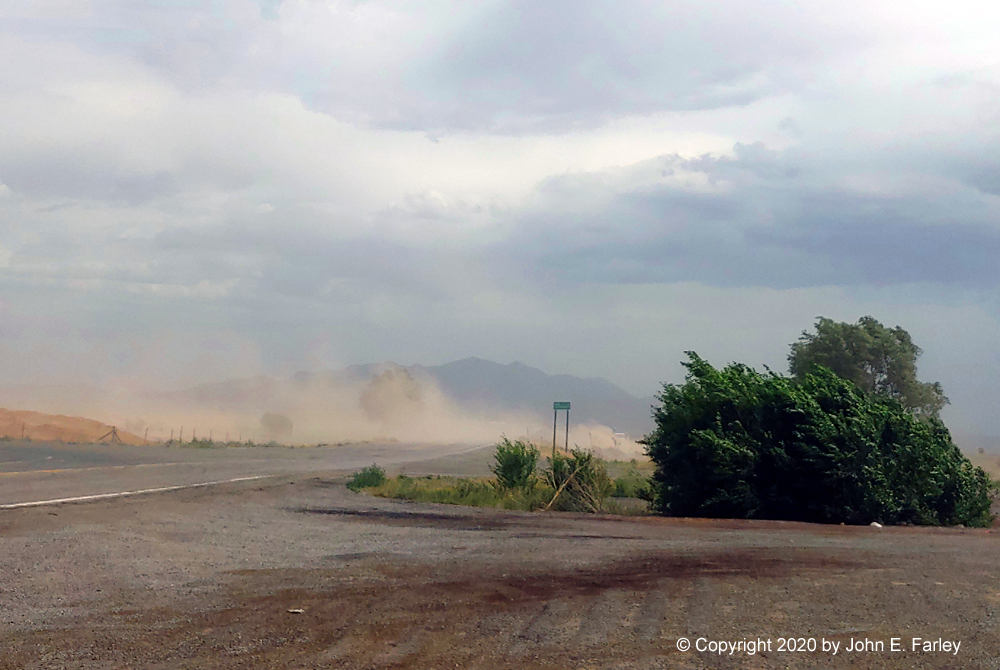 The next picture, taken about 8 minutes later, shows the cloud base of the approaching line of storms, with the blowing dust in the foreground: 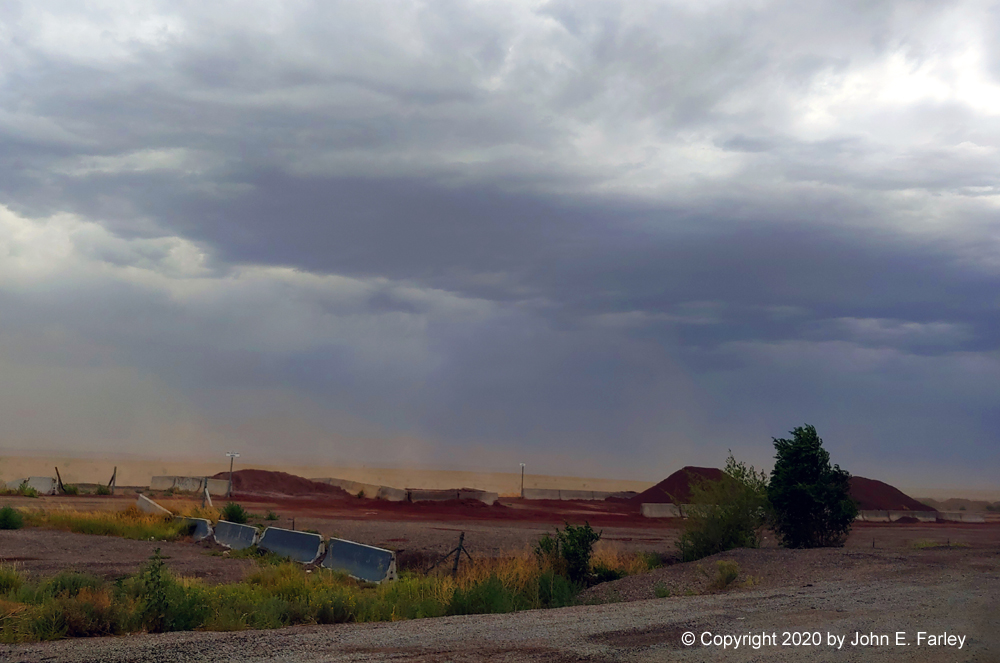 Here is some video I got of the dust storm. I only had my phone for video and because it was pretty bright, I had a hard time seeing the screen and sometimes aimed the phone a little too high while taking video. However, I did get a minute or so of good video. Note that a couple times, cars or trucks coming toward my location pop out of the dust storm, and you can't see them until they pop out of the dust. One person turned left in front of one, which I thought he should have been able to see in time but may have already started into his turn when the truck popped out of the dust ahead of him. This does illustrate the hazards of driving into a dust storm.

Peak wind gusts recorded with this line of storms included 60 mph at Clines Corners, 58 mph at the ABQ Sunport, 55 mph at Stanley, and 47 mph at the Santa Fe airport. The latter, however, was to the morth of where the strongest winds around Santa Fe occurred. Some new storms went up on the outflow boundary near the northeast edge of Santa Fe and moved in to the mountains producing heavy rain and quite possibly some hail. However, in Santa Fe itself, rainfall was light. Measurable in some parts of town, but only wetting in the mountains.