Around 2:00 p.m. on the afternoon of February 27, a winter thunderstorm developed just east of Espanola, NM. This occurred in association with an upper-air low pressure center and cold front which were part of the same storm system that produced severe weather across the Midwest. This winter thunderstorm cell moved southeast into the Sangre de Cristo Mountains toward Ski Santa Fe, where it merged with other convective snow showers that had developed over the mountains. Shortly after the cell initiated near Espanola, I noticed a couple of cloud-to-ground lightning strikes in that area on the Weathertap lightning tracker. Between about 2 and 5 p.m., four inches of snow fell at Ski Santa Fe, accompanied at times by thunder. This led to a 20-minute closure of the ski lifts due to the risk of lightning strikes. An additional inch of snow fell after 5 p.m., yielding a storm total of five inches. Here is a radar loop from approximately 1:45 to 5:00 p.m., showing the initation and movement of the thunderstorm as well as the motion of other nearby showshowers:

FYI, Ski Santa Fe is located east-southeast of where "Los Alamos" appears on the radar map and northeast of where "Santa Fe" appears, in the northeast part of Santa Fe County. For a variety of reasons, including low clouds and occasional bursts of snow and graupel (snow pellets) that obscured the view from Santa Fe, I did not attempt to photograph this storm during its most intense phase. However, toward sunset, around 6:00 p.m., as the cell moved off toward the east and weakened, I got these pictures: 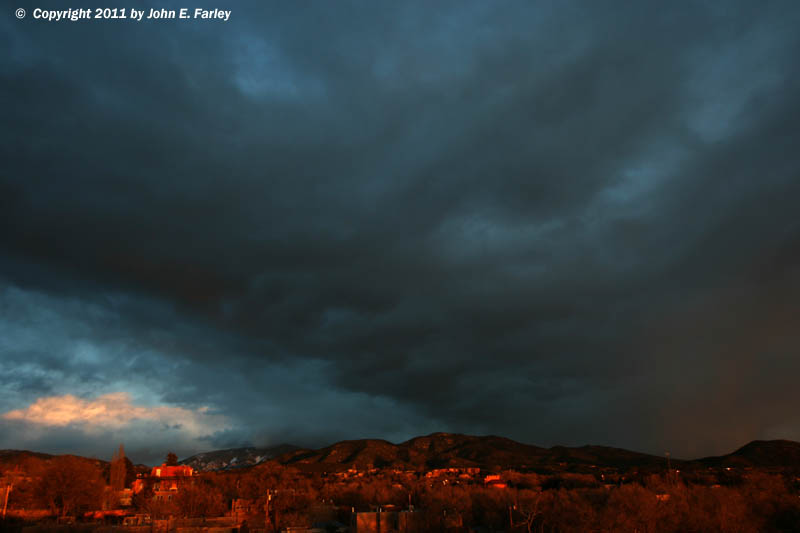 In the picture above, looking to the east or east-southeast, you can see the updraft base of what was left of the storm by this time in the center of the picture. Below and to the right, the orange color is from the setting sun illuminating snow that was falling. And at the lower left, you can see the updraft towers of other cells developing to the east of the mountains. As you can see, there is no snow on the ground in the immediate Santa Fe area - the edge of the accumulating snow was about five miles northeast of the city. 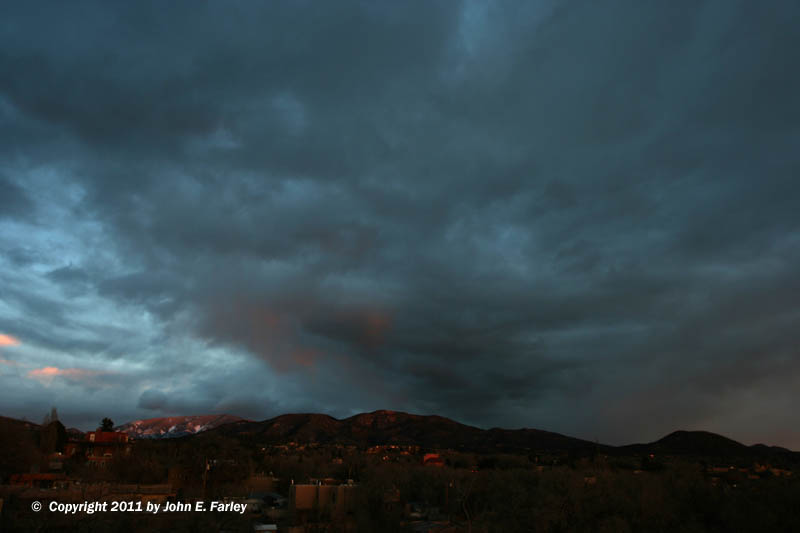 In this picture, taken 5-10 minutes after the first one, the setting sun is producing alpenglow on the mountains and on parts of the updraft base. By this time, the cell was no longer electrically active, but it was continuing to produce snowshowers to the east and southeast of Santa Fe.

Early next morning, I took advantage of the snow the storm had dumped to enjoy excellent ski conditions at Ski Santa Fe. Below are a couple pictures I took near the 12,053 summit of Tesuque Peak: 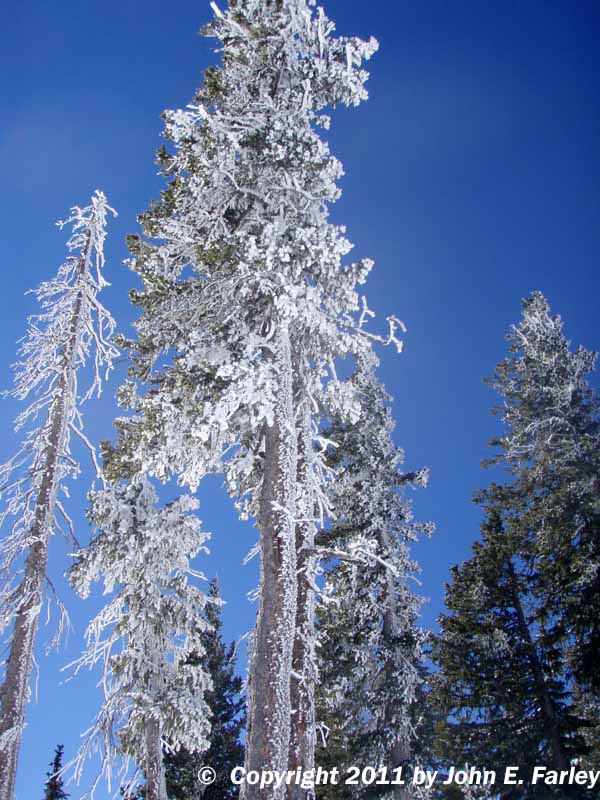 I took the picture above looking just outside the boundary of the ski area. The high winds that accompanied the storm produced big snow drifts, and here again the accumulation of the rime and snow on the trees created a "winter wonderland" appearance.

Apparently, the texture and moisture content of the snow was favorable for snow sculpture - at the base of one of the chairlifts, the lift attendants made (and when not busy, sat in) a couple "snow chairs," something I had not seen before: