After a few hours of pleasant spring skiing at the Sipapu Ski Area south of Taos, I decided around 2 p.m. to shift to storm chasing mode and try to get some pictures of the convective snow squalls that were developing over the Sangre de Cristo Mountains to my north near Taos. With models forecasting the lifted index around -2 as an upper low and back-door cold front moving through the area, conditions were favorable for thundersnow - indeed it was in the forecast for the higher-elevation areas around and north of Taos.

I headed north toward Taos on the High Road to Taos Scenic Byway, and once I crossed over the pass south of Taos, the scenic overlooks along the road that afford a view to the northeast offered me a good view of the storms over the Taos Ski Valley/Wheeler Peak area: 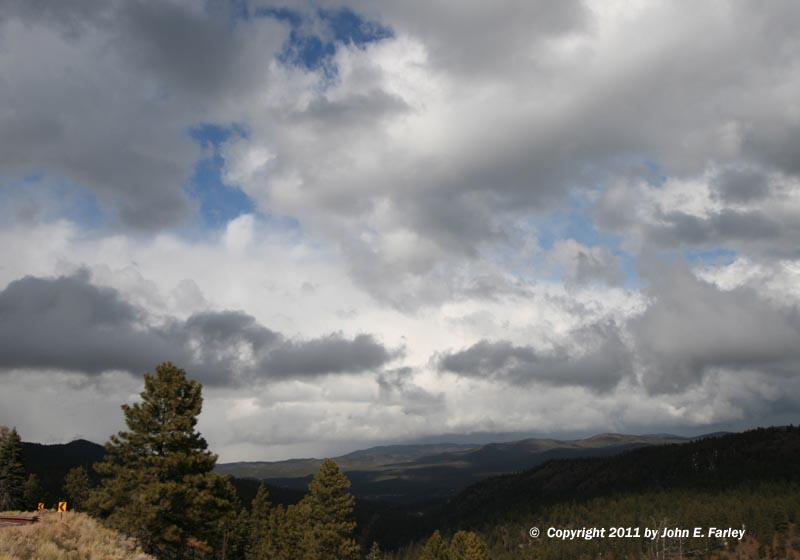 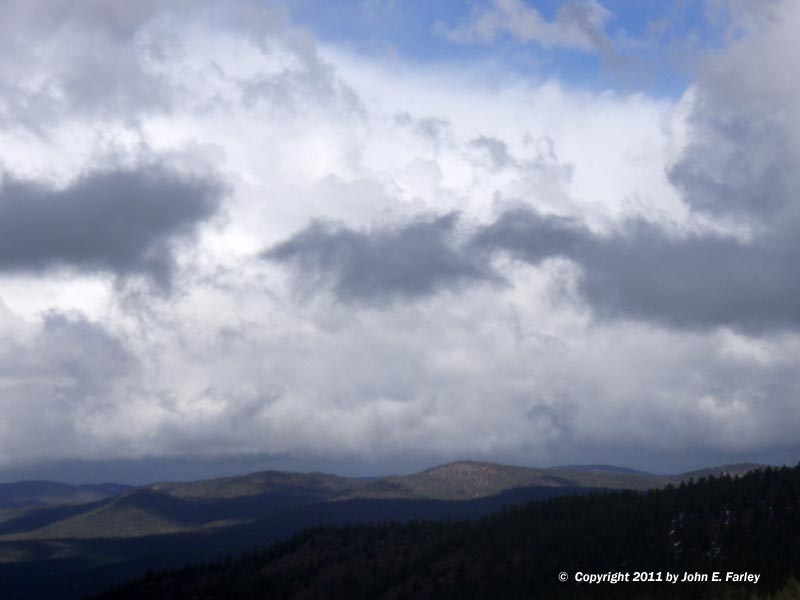 At this time, I was getting an occasional burst of static on AM radio, so I figured, correctly as it turned out, that there was thundersnow occurring. I also noticed some dark updraft base in the mountains just a couple miles to my northwest, and figured this might indicate intensification of a small snow shower I had seen to my northwest as I left Sipapu. However, the activity in the mountains above Taos seemed much more intense, so I headed north through Taos, where a brief moderate burst of snow and graupel occurred, and stopped a few miles north of town and watched the mountains reappear as the storm moved away to the southeast. When I had left Sipapu, it was sunny and the temperature was 47. But having crossed the cold front and gotten into the cold outflow from the snowshowers, the temperature now was down to 32 - and I was at a lower elevation than Sipapu.

Around this time, I noticed that the snowshower I had seen earlier to my northwest when I was on my way to Taos had now intensified quite a bit. So I decided to double back through Taos toward the southwest, and after I got through town, I was greeted with this: 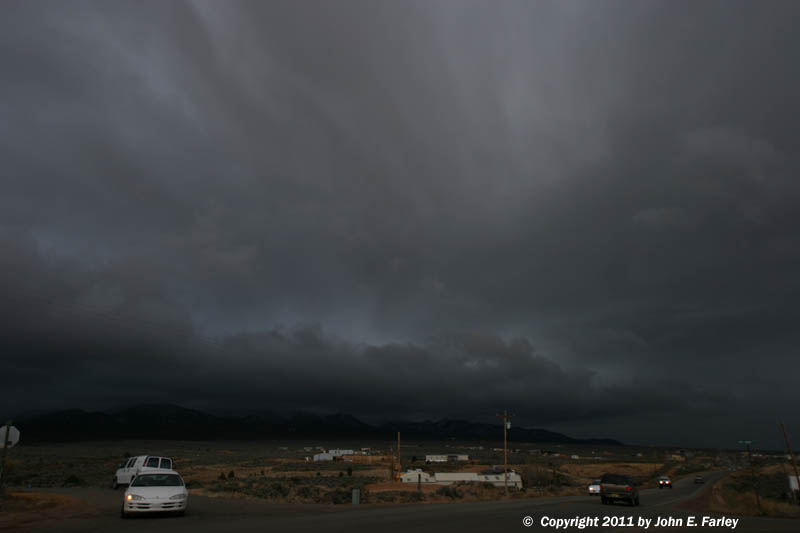 What had been a small snowshower had blossomed into a nasty-looking thundersnow storm with a 40+ DBZ radar return along the county line of Rio Arriba and Taos Counties to the southwest of Taos. Here is a radar image from around the time the photo above was taken:

This intensification likely occurred as the southwestward-moving back-door cold front shifted the best forcing farther to the southwest. Rather than putting myself in the middle of blinding snow in the mountains, which would have happened had I returned to Santa Fe via the High Road, I decided to head down the main road between Taos and Santa Fe which goes through the Rio Grande Gorge, and try to get ahead of the storm for some structure pics from the other side. Just as I entered the gorge, I caught up with the snow, and encountered some heavy bursts of snow with large snowflakes in the gorge. However, it was warm enough down there that it did not accumulate much, although I could see that the upper parts of the high cliffs of the gorge were white, especially on the south side of the gorge. I got out of the snow around Embudo, and once I was out of the gorge and west of the storm, I got a few decent views, although much of the time low clouds and other weaker snowshowers blocked my view. This was my favorite picture from this angle: 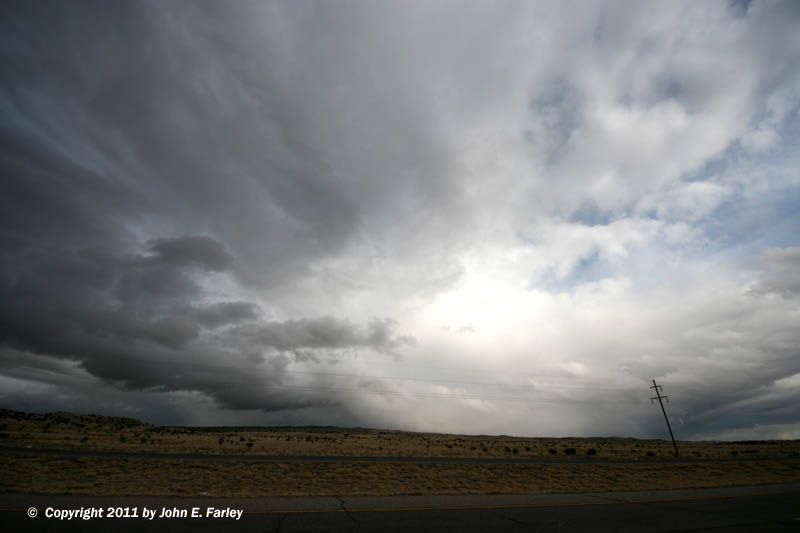 As I was passing through Espanola, I noticed some decent structure to my east so I decided to head up to Chimayo for a better view. However, by the time I was through the wooded, hilly, built-up area just east of Espanola, I was in light precipitation and there was not much to see. Chimayo had about a half inch of snow, and was getting a light mixture of snow and drizzle as I drove through. I did not get any more good pictures of the storm, but the fresh snow in the desert south of Chimayo made for some nice scenery: 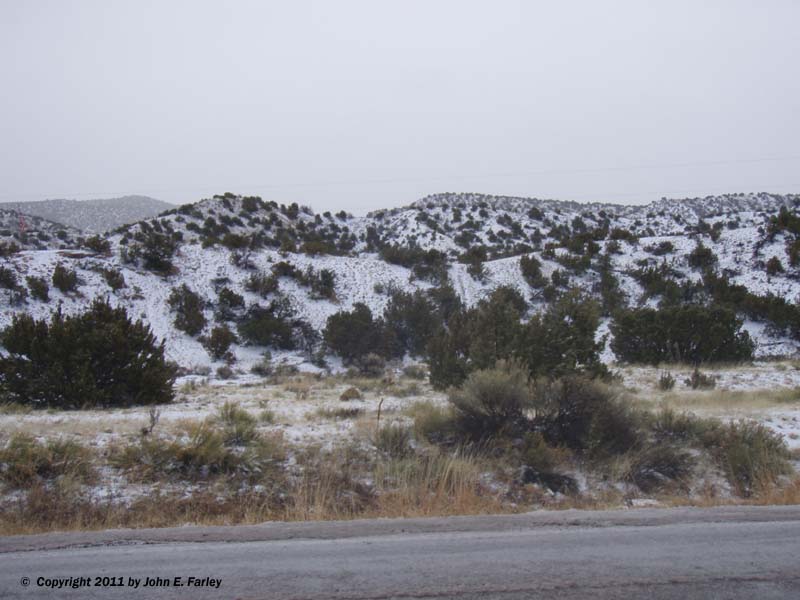 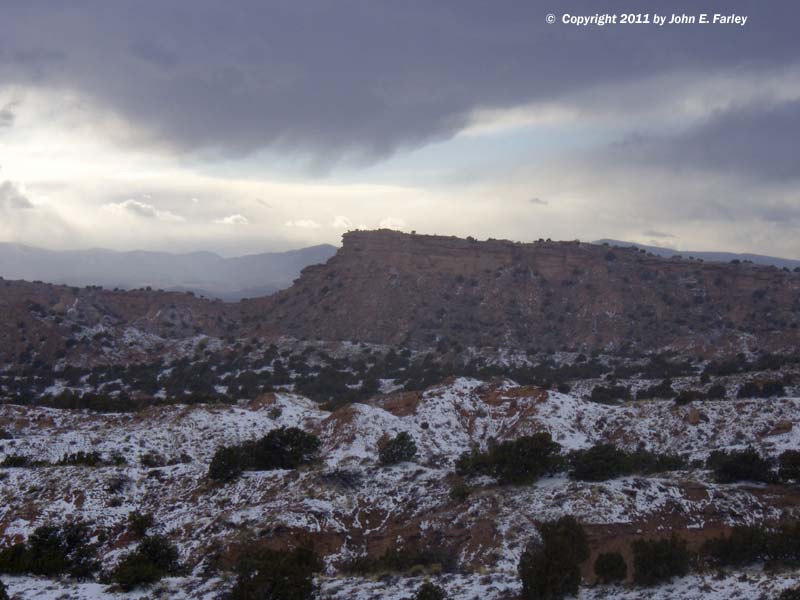 I personally never heard any thunder, but I was in the car and too far from the storms most of the time to have heard any. However, the lightning detector data, the static on the radio, and three short-term forecasts from the Albuquerque NWS that all mentioned lightning strikes or thundersnow all confirmed to me that it was there. Due to the short duration of the storms, snow accumulations were on the light side - 4 inches at Taos Ski Valley from the first storm, and 1-3 inches along the Rio Arriba/Taos county line from the second one, including 2 inches at Sipapu where it has been sunny and warm when I left. From what I could see from the precipitation I encountered at various elevations, it was all or nearly all snow above 6500 feet or so elevation, and mostly rain below that - but in this part of the state, nearly all the measurable precipition occurred above 6500 feet. After the storms moved out onto the plains, there was a mix of snow, rain, and even probably some hail, with lesser snow accumulations. The storms continued southeast across the plains overnight, producing a mix of precipitation in the Texas panhandle and eventually a cold rain next morning in the Dallas area.