On the afternoon and evening of March 7, a strong storm system produced a series of intense convective bursts of snow in northern New Mexico, especially over the mountains. Accumulations reached 6 inches in various places in the northern mountains, 4 inches in west-central NM, and an inch or two in parts of the northern Rio Grande Valley. Here are a few pictures I took the afternoon of March 7 and the next morning at the Santa Fe Ski area in the Sangre de Cristo Mountains: 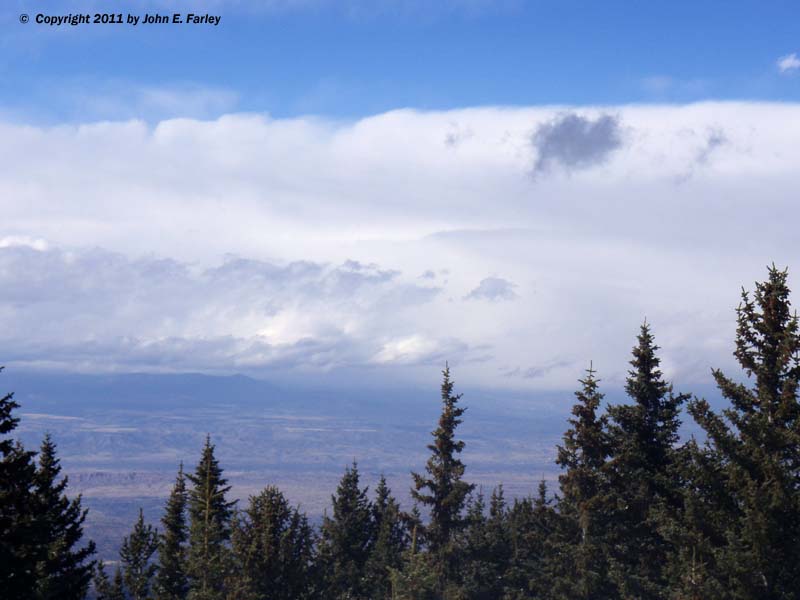 Band of convective snowshowers, some with thunder, looking northwest from the Santa Fe Ski area. The cell that produced the snow pictured below formed ahead of this main line of convection, east of the tail end of this line and between Albuquerque and Santa Fe. A radar image showing the cell as it moved over Santa Fe (producing lighter snow showers there) and approached the ski area can be seen here. 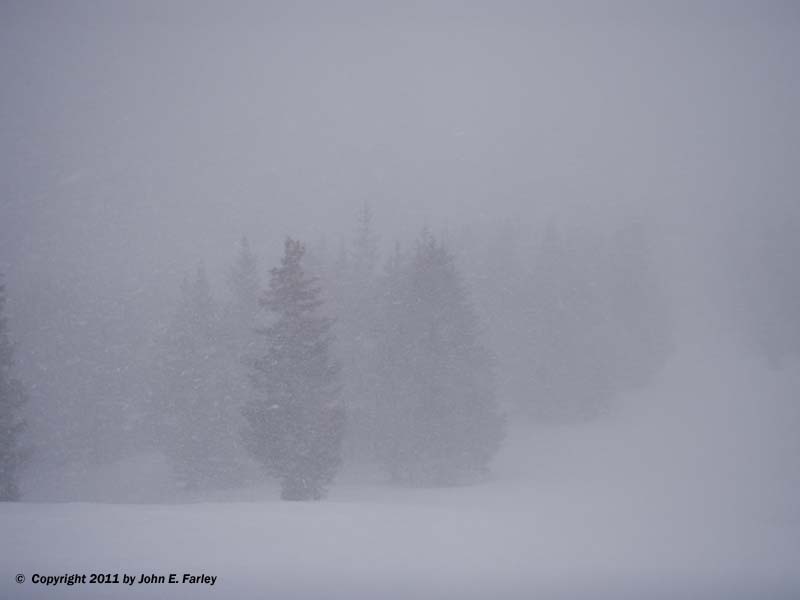 A burst of snow that produced about an inch of snow between 3:00 and 3:50 p.m. on March 7 at the ski area. About 3 minutes after taking this picture, I heard a rumble of thunder. This was the first time this winter that I have actually experienced thunder with snow falling, although I have seen thundersnow storms from a distance on two other days. This picture was taken at 4:32 p.m. MST, about 5 minutes after the time of the radar image shown here. Note that now the cluster of snow showers between Santa Fe and Las Vegas, which includes the ski area, is now as large and intense as the initial line to the west. A third radar image can be seen here. Now the line to the west has re-intensified, but the area of convection over the mountains between Santa Fe and Las Vegas has expanded to include a larger area than the line to the west. (The actual area of coverage is even larger than it looks on this image, as the southern extent of the area is in a region where the ABX radar beam is blocked by the Sandia Mountains.) As I drove down the mountain about 20-30 minutes after this, I saw some nice mammatus to my northwest, probably associated with the line to the west which passed northwest of the ski area. However, the mammatus was a little too far away to get a good picture with the automatic camera I carry while skiing.

Additional snowshowers overnight brought the storm total to 6 inches at the ski area. I took this picture the morning of the 8th near the 12,000 foot level. The combination of rime and snow on the trees, the snowdrifts, and the clouds/fog (cloud bases well below the top of the mountain) made for an other-worldly scene. Several spots in the Sangre de Cristo Mountains received a total of around 6 inches of snow from this storm, with about 4 inches in the Jemez Mountains, which were impacted to the line to the west.