Early the evening of April 25, 2012, what would become a long-track supercell formed over Wapello County in Southeast Iowa. The storm developed in northwesterly upper flow associated with a jet max and over an "Alberta Clipper" type surface low, on the warm front but very near the "triple point" low where the warm front extending southeast from the surface low met the cold front extending west from the low, as the entire system moved toward the southeast. Over the next 15 hours, this storm moved all the way from southeast Iowa into Georgia and South Carolina. Across southeast Iowa, northeast Missouri, and from northwest to southeast across Illinois, the storm remained supercellular, producing numerous reports of dime to golfball sized hail, with the largest hail, 2 inches in diameter, occurring in Clinton County, IL about 40 miles east of St. Louis, MO. After crossing Illinois, the storm evolved into a bow-echo meso-convective system (MCS), and continued to produce severe hail and also produced damage wind over a gradually widening area extending all the way into the Carolinas, southeast Tennessee, and northeast Georgia, with severe weather continuing into mid-morning on April 26. Here is a map of severe reports, with most of the reports southeastward from southeast Iowa into Kentucky and Tennessee being associated with this storm and the bow-echo it eventually evolved into: 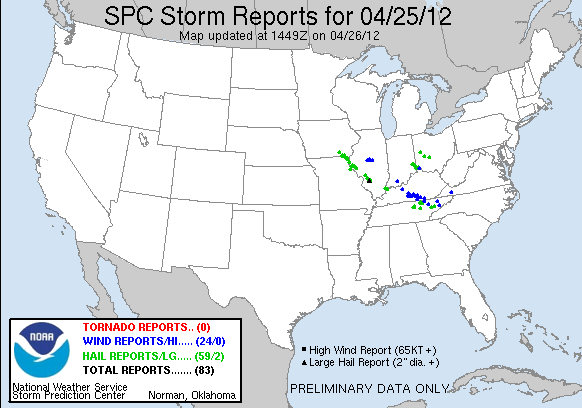 A listing of severe reports from the day from SPC can be found here (MS Word file). The storm produced additional severe weather in the Carolinas and Georgia, but since these occurred the next morning they are in the following day's reports (4/26).

Due to numerous competing commitments and admittedly some doubts as to whether storms would actually occur as far west as southwest Illinois, I did not really plan to do any chasing this day. I did, however, track the supercell through the evening on radar as it moved just east of Quincy, IL southeast toward Macoupin County and eventually northeastern Madison County. Looking out the window toward the storm around 11 p.m., I saw nearly continuous lightning, and decided that with a very electrically active supercell set to move just 10 or 15 miles northeast of my location, I ought to go out and at least try some lightning pictures. So I headed out from Edwardsville around 11:30 p.m., figuring I would go one exit up I-55 to the Hamel exit and would be in good position to at least get some decent lightning pictures. As I headed east on route 143 toward I-55, I saw some elongated, lower-level clouds well out ahead of the precipitation area, near the position of the gust front that was showing up on radar 5-10 miles ahead of the main precipitation area. There was also quite a bit of in-cloud lighting visible high in the storm, well above the low cloud feature. (This was likely the arcus cloud feature in the photo in Dan Robinson's report on this storm, linked below.) I thought about stopping and getting some wide angle photos of the lightning and the storm structure, but I knew that if I did the storm would get to the Hamel exit before I did, and I wanted to set up there for hopefully some good CG lightning in the core of the storm.

As it turned out, I might have done better photo-wise had I done that, because nearly all the lightning in this storm was in-cloud, not cloud-to-ground. I saw one or two CG bolts while driving to the Hamel exit, while up in the clouds, the lightning danced continuously. Once I made it to Hamel and set up for lightning photos, I saw exactly two CG bolts, and didn't get pics of either of them. One was a huge, presumably positive bolt that hit 2 or 3 miles away, followed by the tremendous thunder typical of such bolts. But that hit just before I was ready, so I missed it. Still, despite the lack of bolts in my viewfinder, I did manage to get a couple interesting shots thanks to the varying illumination by the lightning and street lighting of a barn and outbuilding near where I set up: 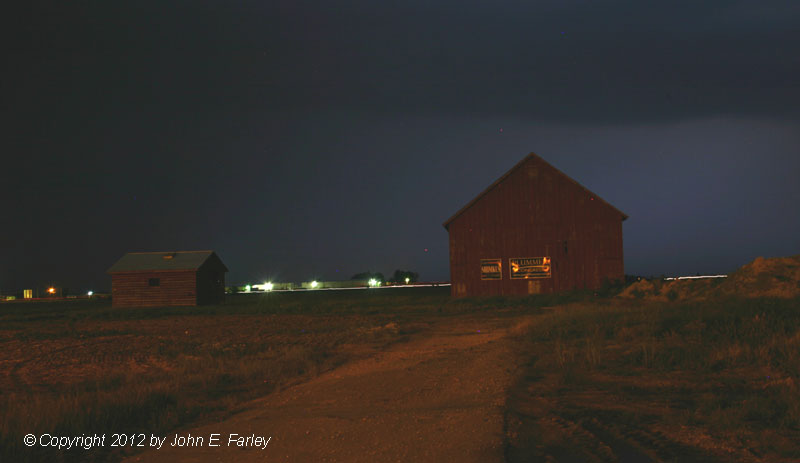 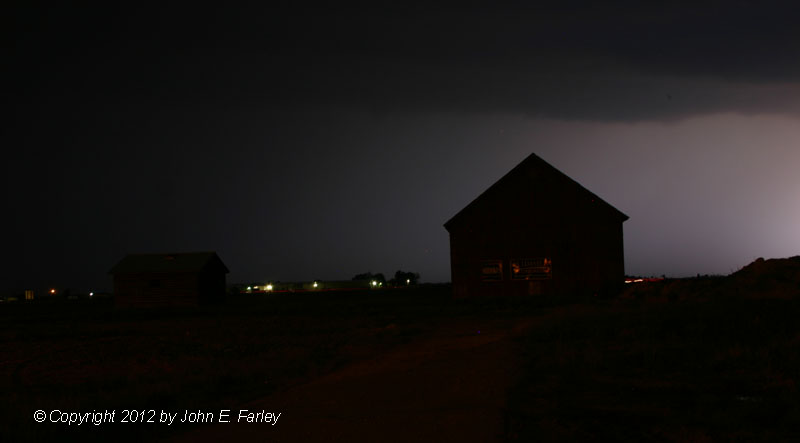 I tried to get some video with my iPhone also, but that did not work terribly well. However, this one video capture is kind of interesting, as it shows what might be a notch and rain-wrapped meso. Or it could simply have been the new core forming to my west merging into the original precipitation area - hard to tell in the dark, but kind of an intersting feature. Soon after I took these pictures, a somewhat wind-driven rain and maybe a few hailstones began to fall. I opted to avoid the hail and headed back south toward Edwardsville, but hail occurred all around the location where I took these pictures - dime sized hail fell a couple miles to the west, and the place where I took the pictures was on a direct line between reports of golfball hail around Bunker Hill and 1-inch hail around Marine - so I'm fairly sure if I had stayed there, I would have been in the hail. But I chose to spare my car, knowing the hail in this storm would be harder than the quarter-sized hail/graupel hybrid I had encountered 10 days earlier in Coloardo. Another area storm chaser, Dan Robinson, did sample the hail core farther southeast near Highland; you can see his pictures here. Additional pictures of the hail with this storm can be seen on the St. Louis National Weather Service's Web site, here.

The storm moved over me a little sooner than I expected, and also appeared to be farther west than what I had expected based on radar extrapolation when I left home. I did not bother taking and setting up the computer due to the short-fuse decision to go out after this when I had not planned to. But it was evident when I got home that what had happened was that a new cell had fired on the flanking line just west of the main one and then quickly merged into it. When this happened, the storm pulsed up, producing several reports of golfball hail from the Highland area southeastward into Clinton County, and the largest hail, 2 inches in diameter, near Aviston in Clinton County around 12:40 p.m., about a half hour after the pictures above were taken. (That report was not yet on the SPC list linked above when I downloaded it, but it is in the Local Storm Reports from the St. Louis NWS.)

For a northwest-flow event, this was quite a long-lived storm. Would have been interesting to see what it looked like in daylight. Maybe someone in Iowa or far northeast Missouri did, but by the time the storm reached Illinois, lightning was really the only way to see it.