A little after 1:00 p.m., I noticed that thunderstorms were building to the northwest of Pagosa Springs. I decided to go out and try to get some pictures, and when I got to a nice open viewing point at Veterans Memorial Park, the storms, which appeared quite strong and were in a small cluster, were quite photogenic:

This is a panorama photostitch of 3 images. Note that the updraft towers on the left side of the storm, near what was probably the heaviest precipitation core, are rock-hard. This suggested a pretty intense storm to me, and this character persisted for quite a while. Also notable is that the atmosphere was indeed a little more unstable on this day than on the past few, despite storms on those days, too. Today the CAPE was in the range of 500-800 j/kg - not a lot by Midwest or Great Plains standards, but enough to get strong storms at higher altitudes.

After a while of getting pictures from this location, I decided to move closer to the storm in order to get a better view of base features and also possibly some chances for lightning photography. At this time, the aforementioned precipitation core was to my northwest, and I thought that the storm was probably moving east or northeast, so I headed northwest on North Pagosa Boulevard toward Lake Hatcher. As I got into the Lake Hatcher neighborhood, I could see that there was a small lowering, directly under the main updraft. Here are a couple pictures, one zoomed into the lowered area and the other showing the updraft above the lowered area: 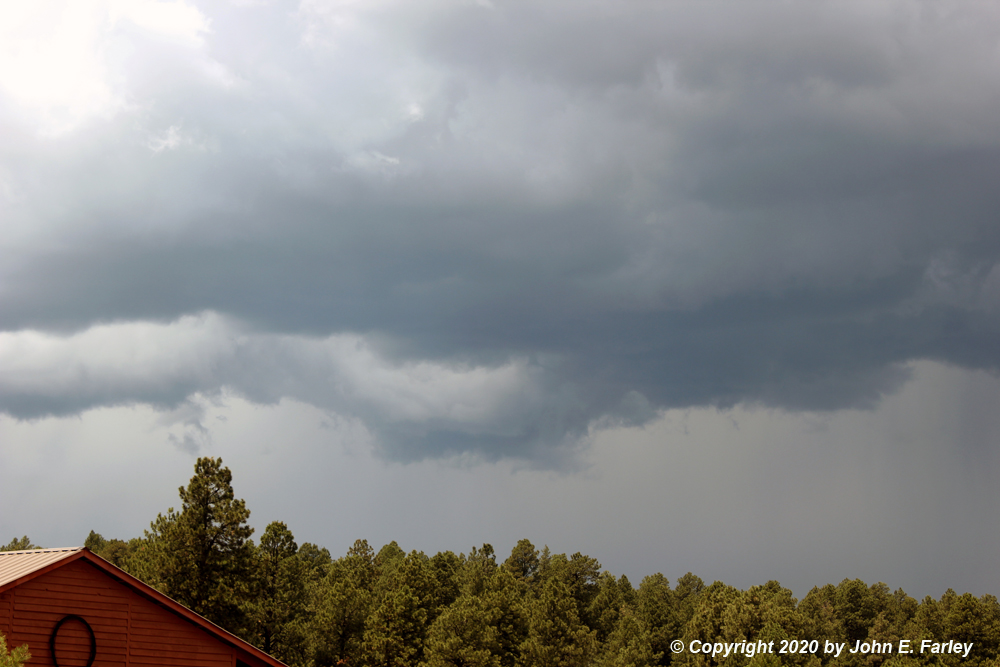 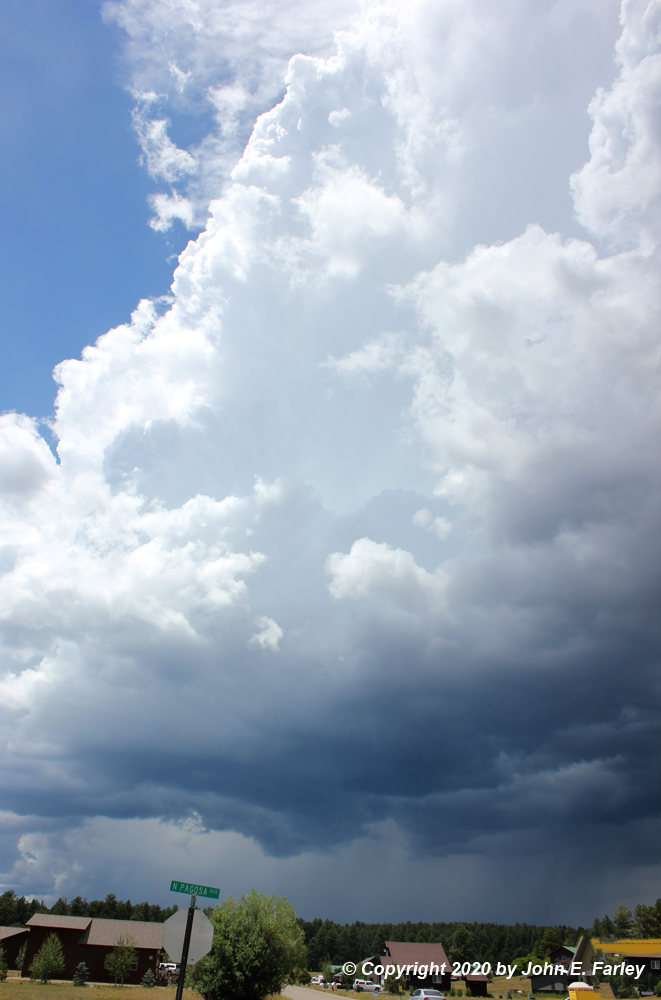 Notice also near the middle of the second picture, a little of the blue-green color often seen with hail-producing storms. After this, I continued to where Pagosa Blvd T-intersects with Piedra Road and turned left to continue north a few more miles. Once you get a few miles, you come out of the woods into a large open area with good views. I figured if I could get there, I would be in a good spot for lightning photography. As soon as I got onto Piedra Road, I noticed lots of traffic coming back toward town away from the storms. So much that at first I thought some kind of event had just let out. However, what it really turned out to be was outdoor recreationists fleeing the storm and heading back into town.

At this point I was still thinking the storms were moving east or northeast, but once I set up for lightning photography and watched the leading edge of the precipitation for a while, I realized the actual movement was more to the southeast. Looked like the storm was now surging/propagating in that direction on its outflow. Unfortunately from the standpoint of lightning photography, nearly all the lightning at this time was in-cloud. My lightning trigger triggered about a dozen times, and of those I only saw one flash, and even then just light, not the bolt. Needless to say, nothing of value on any of these pics. However, I could see the leading edge of the precipitation was nearing me, so I decided to stay put and see if there was any hail. I figured that if there was it would probably be small. As it turned out, there was a lot of hail, beginning a little before 2:00 p.m., but as I expected, it was all small. Came down really hard at times, though, allowing me to get some decent hail video:

In the video, you also see the continuing parade of cars fleeing the storm and returning to town. As it turns out, the storm pretty much moved southeast along Piedra Road from Williams Lake down through several other recreation areas, clearing all of them out and sending the recreationists back to town. (Although I did see some cars still parked at trailheads, so I am suer some people did get caught in it that were too far down the trails to get back ahead of the storm.) Heavy rain and/or hail came down for ten or fifteen minutes. Eventually it looked like the heaviest of the storm might be passing, so I started back toward home. I encountered a heavy burst of rain and hail in the Hatcher Lake area, starting with what may have been a few slightly larger hailstones. But again, mostly-pea sized. I continued most of the way home in rain and hail, but got ahead of the leading edge by a mile or two from home. Lots of thunder when I got home, more than earlier, but still only occasional CG bolts. Soon it began to hail a little and rain pretty hard, but the hail did not last long. However, over an hour or an hour and a half, we did get 0.11" of rain, making it the third straight day with wetting rain, with the three day total just under a half inch. So finally the monsoon has gotten going a little better!