The first thing this storm offered up to me was my favorite oddball precipitation type, something I call "thunderslush." It is partially-melted snow or graupel, usually mixed with rain, accompanied by thunder and lightning. Though rare in the Midwest, it occurs fairly often in high-altitude areas such as Colorado and New Mexico in the spring and fall. Kind of like falling slushballs. You can see the splotch from one of these in the upper center of this picture: 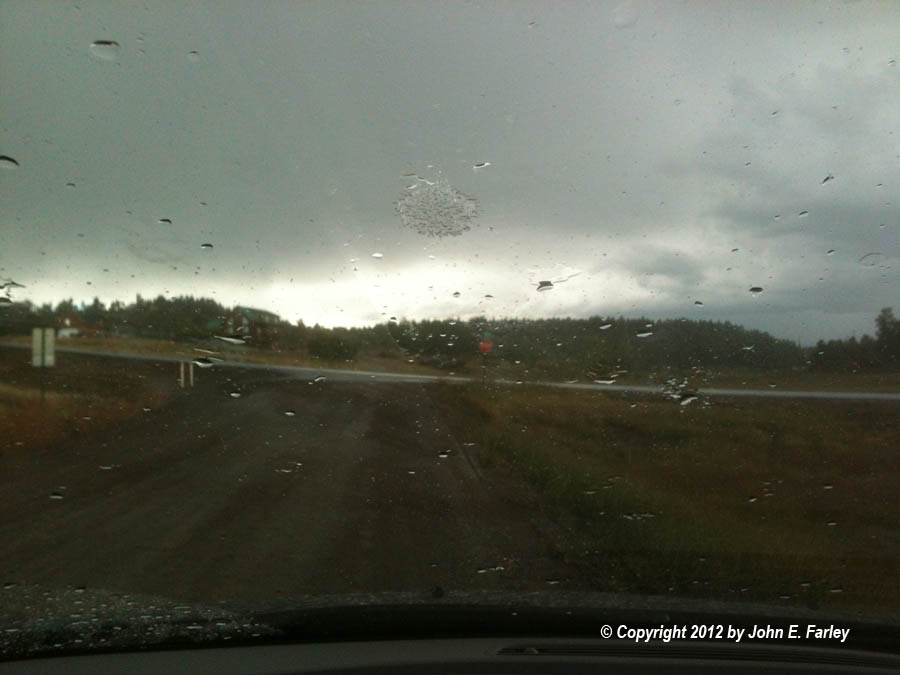 Here is a short video showing the "slushballs" hitting my windshield, along with some distant flashes of lightning and some thunder from a closer flash of lightning:

Note the splotches of slush on the windshield as the part-melted snow hits it. Also note the CG lightning in the background from nearlby cells, and you can hear thunder around the 45 second point from lightning in the cell I was observing. Not too loud, but it is there. There was also a little hail just before I started this video - so rain, hail, and half-melted snow all in the same storm. The temperature fell from 68 just before the storm to as low as 50 during it. Rather warm for any unmelted snow the reach the ground, but the combination of high altitude, large temperature-dewpoint depression, and the storm's downdraft allowed some of the snow or graupel to reach the ground before fully melting. You can also see from the following picture, taken in a different location a little later, that the precipitation is originating as snow or graupel then mostly (but not entirely) melting as it falls: 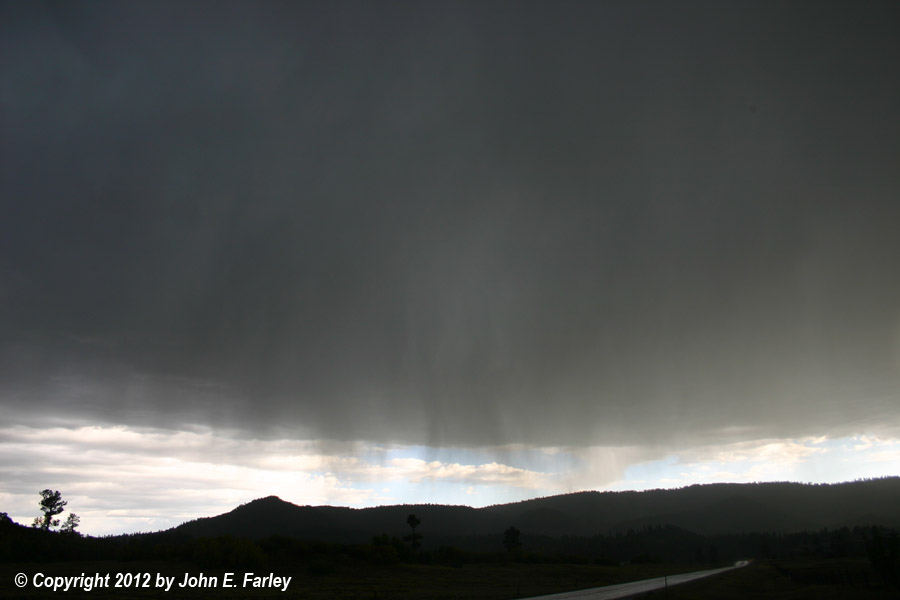 You can see that the precipitation shafts have a somewhat wavy look to them under the cloud, but then become nearly invisible close to the ground. The wavy appearance is because they are composed of snow or graupel, and the place where they become hard to see is where most of it is melting on the way down. It is evident in the picture, though, that precipitation is still making it to the ground, in this case mainly (but not entirely) as rain. This evident in the facts that the road was wet and you can see the visibility effects of the rain on the higher terrain in the background.

There's nothing unusual about a mix of partially melted snow and rain - it happens often in the winter. But what makes it unusual, except in high altitudes, is that it was accompanied by a considerable amount of lightning and thunder; in fact in some locations where I observed the storm by CG lightning that struck within less than mile of my location.

As I mentioned in regard to the video linked above, some of the lightning in the video was from nearby storms. The storms were in fact very multicellular, and other storms besides the one where I observed the "thunderslush" were occurring to the south and east of Pagosa Springs. Here is a panorama photomerge of some pictures I took of these storms looking southeast. These were likely producing a similar mix of precipitation to the one I observed, except that over the highest elevations of the mountains, it may have been entirely frozen precipitation.

I worked my way southwest a little to try to get under the area where there was snow or graupel aloft, and eventually did. There were more of the splotches of melting snow for a while, then it turned to all rain and the sun began to come out and shine into the precipitation area. That led to this double rainbow: 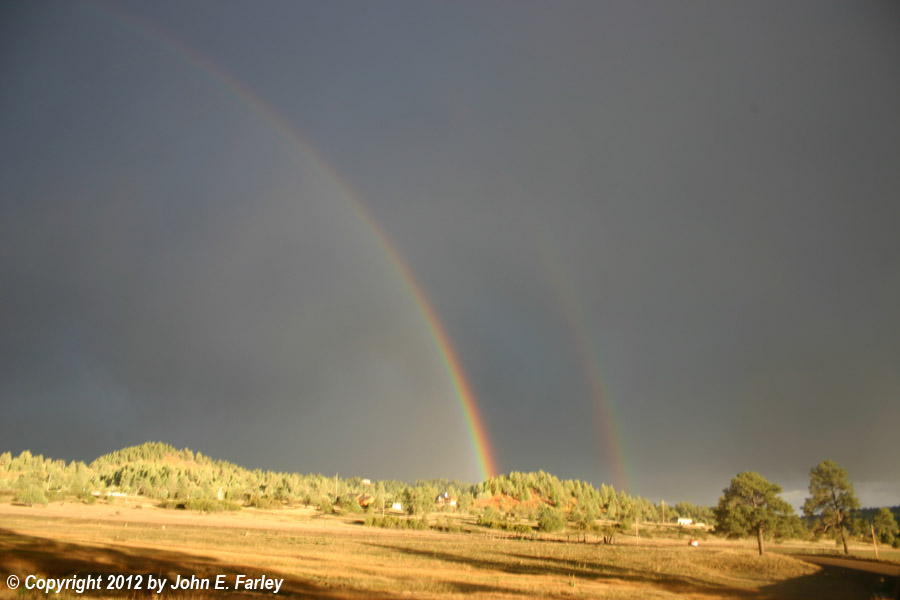 While I am pretty happy with this as a rainbow picture, it could have been a lot more. Several bolts of CG lightning flashed right between the two rainbows, and others to the right. I came within a hair of catching them on camera, as they did flash multiple times, but each time I just missed them. Really need to get a lightning trigger for my camera. Still a nice rainbow, though.

After I got home, the storm offered me one more treat, as the setting sun illuminated some of the mammatus that had developed by then. Some, but not all - but still enough for a nice view: 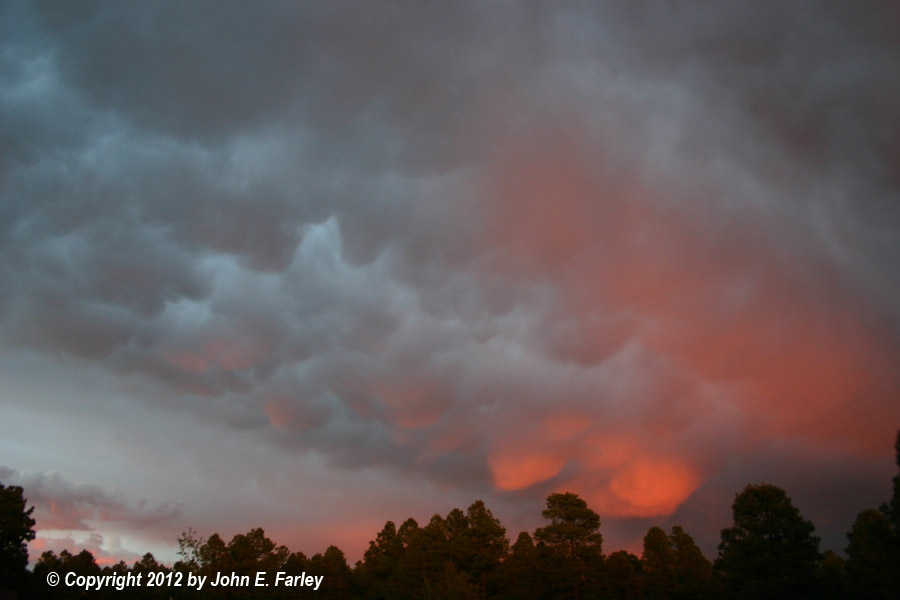