The Life Cycle of a Colorado Thundersnow Storm
April 21, 2020


On April 21, I was able to observe nearly the entire life cycle of a thundersnow storm in Colorado, from when it started as a billowing cumulus cloud south of Pagosa Springs to more than two hours later, by which time it had grown upscale into a long band of snow, graupel (snow pellets), rainshowers, and thunderstorms extending from east of Wolf Creek Pass in Colorado back southwest across the South San Juan Wilderness, through the Chromo, Colorado area, and into northern New Mexico. On this website, I document my observations with a series of photos presented in chronological order from around 3:40 p.m. to just after 6:00 p.m. and discussion of what was going on with the storm as it developed and gradually changed in character. I would note that I observed the storm in a safe, socially-distanced manner, traveling only about 30 miles form home and having no contact with anyone else throughout my observations of the storm.

This storm illustrates several ways in which thundersnow events in southwestern states such as Colorado and New Mexico tend to differ from thundersnow events in other parts of the country. Usually when thundersnow happens in the Midwest and Northeast, it occurs within large areas of snow occurring on a synoptic scale to the east, north, or northwest of a surface low pressure system. It tends to be embedded within much larger areas of snow wrapping around the main low pressure area. In contrast, thundersnow events in Colorado and New Mexico, where they are actually quite common compared to other parts of the country, usually occur in isolated cells that are more like spring and summer thunderstorms. These often occur ahead of a Pacific cold front or just ahead of a low pressure system. The storms in Colorado on April 21 occurred ahead of an upper low near the Four Corners that was moving to the east. In sunny areas at elevations around or below 7500 feet, temperatures ahead of the storms were in the mid-50s, though they fell quickly once the storms developed and moved over any given location. They did produce some rain, mainly in lower elevations, but in any heavier cores above about 7500 feet elevation, the predominant precipiation type was graupel or snow.

This illustrates another way winter thunderstorms in the Southwest differ from those in other parts of the country: often within the heavier cores, the dominant precipitation type is graupel, aka snow pellets. This type of precipitaton forms when snowflakes being lifted within a convective storm become rimed, that is, supercooled cloud droplets freeze onto the snowflake in a process known as "dry accretion." Rime is softer than regular ice, like you get in hail. It gives graupel a texture something like styrofoam, though heavier. And unlike hail, graupel or snow pellets are a winter type of precipitation, though both are convectively generated. Hail is a spring or summer type of precipitation, and forms through "wet accretion." This means that a snowflake or other particle accumulates wet cloud droplets on it, which freeze after accumulating, which makes the hailstone hard. And if the updraft is strong enough, the hailstone can accumulate a considerable thickness of ice on it, making it quite large in the strongest storms. With graupel, in contrast, supercooled cloud droplets (i.e. droplets that are liquid even though their temperature is below 32 degrees) freeze onto the snowflake immediately upon contact, giving it a softer, more porous and lightweight stucture than hail, but harder and sometimes a little heavier than ordinary snow. In my experience, most thundersnow storms in Colorado and New Mexico produce both graupel and ordinary snow. The graupel or snow pellets are most likely to occur in the heaviest core of the storm and the snow often in lighter, more stratiform parts of the storm, though in some cases they also fall mixed together.

The storm I observed on April 21 fits the aforementioned pattern pretty well, as it produced mainly graupel in its heavier cores above around 7500 feet and up, and mainly ordinary snow in its more stratiform regions once the storm grew upscale into a multicellular line or cluster of storms. Here are my observations and photos of this storm:

3:42 p.m. - looking SW from Archuleta County Fairgrounds. At this time, what was to become a thunderstorm was mainly a large cumulus buildup, with light rain and snow showers off to its southeast: 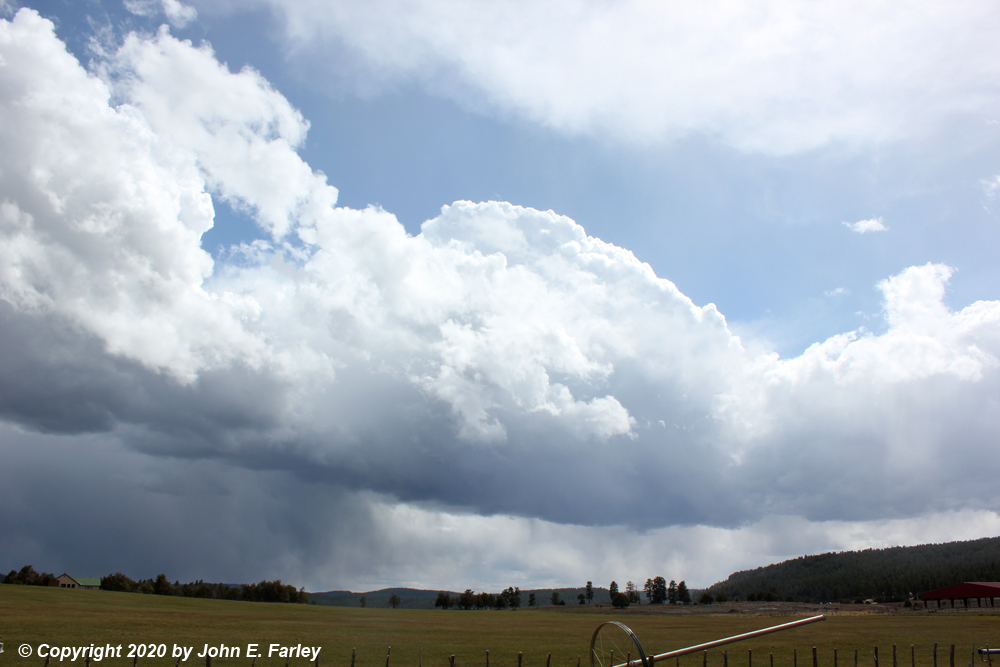 3:48 p.m. - looking SW from U.S. 160 just NE of Pagosa Springs, same feature. The temperature in the sunny areas ahead of the developing storm was still in the mid-50s, though it would fall sharply once the storm arrived. Heavier precipitation now starting to fall: 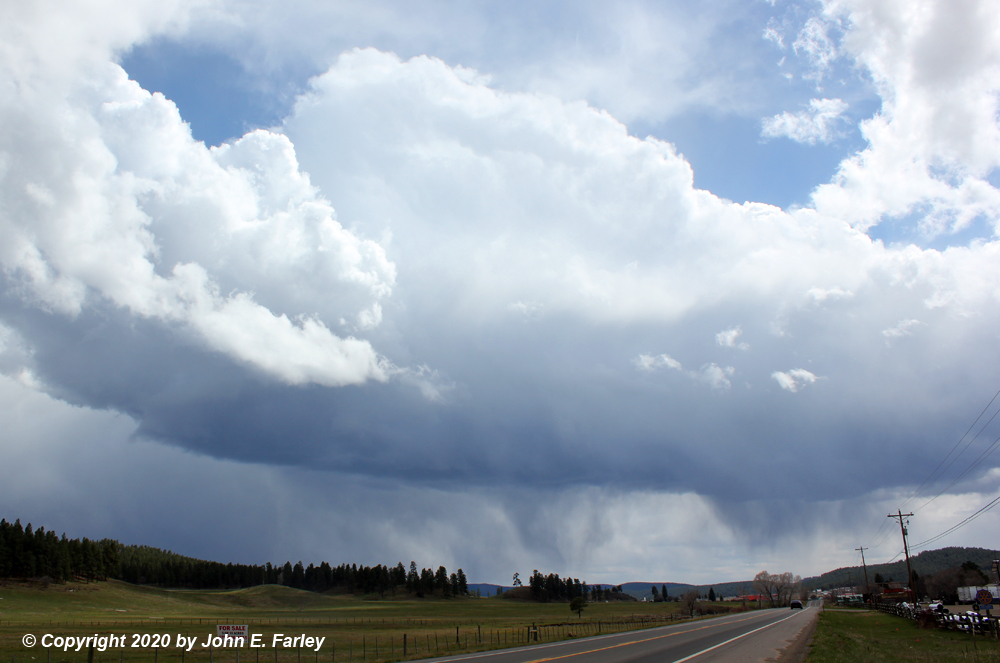 At this time, you can tell that most of the precipitation aloft is graupel (snow pellets) or snow. This is evident form the rather feathery, wispy appearance of the precipitation under the cloud, rather than the more or less straight lines you would get if it was rain. It wasn't all reaching the ground yet, and some was likely melting to rain just above the ground. As the storm later moved to slightly higher terrain, this would change, and the p-type would be mainly graupel or snow. Generally, this was the case above around 7500-8000' elevation.

3:53 p.m. - Same location. First thunder occurred around this time. I happened to be checking the lightning tracker on my phone, and a new strike showed up south of Pagosa Springs. Around 15 seconds later, I heard a rumble of thunder from the new thunderstorm: 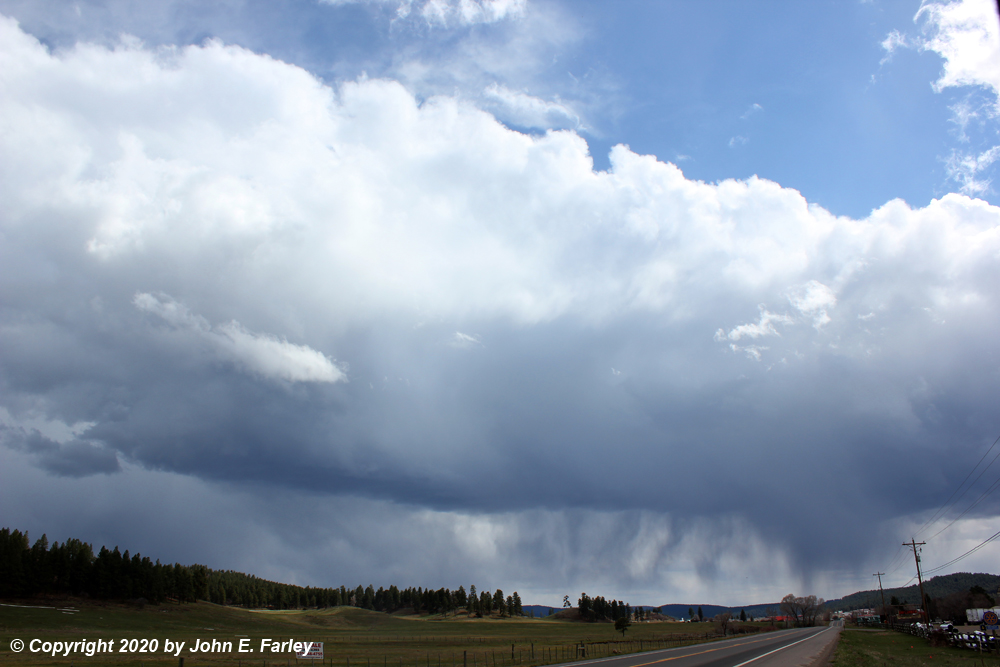 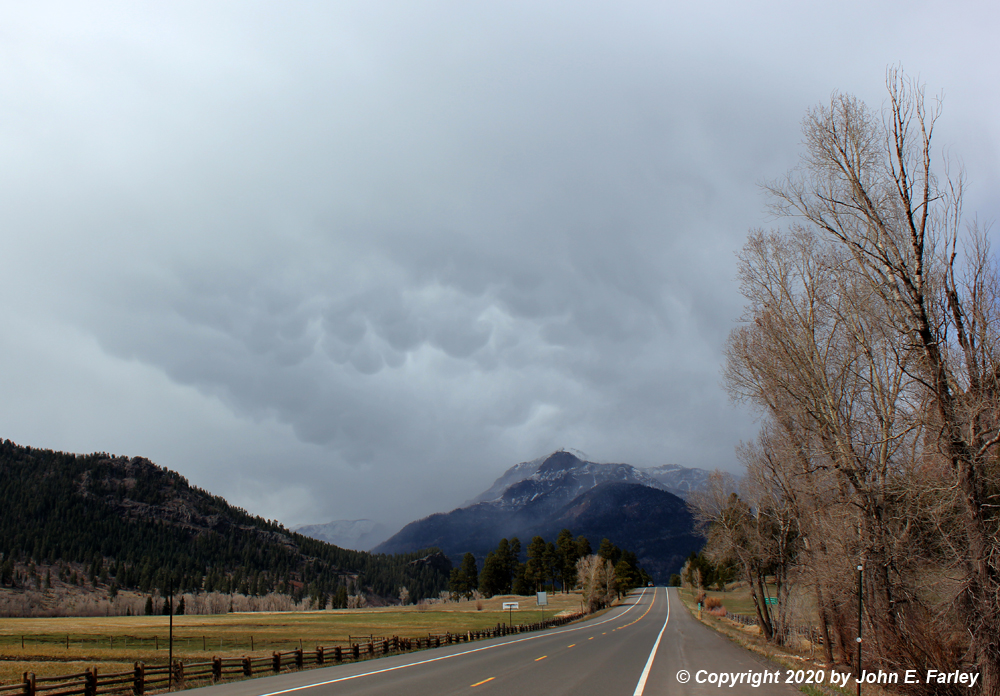 I moved up and back down the highway a couple times, staying ahead of the storm as it moved along and just SE of the highway, which runs NNE from Pagosa Springs to Wolf Creek Pass. On each stop to watch the storm I heard at least one rumble of thunder from it, though I didn't get any on video while I was ahead of the storm. As this picture shows, the thunderstorm was becoming more linear as it moved NNE. This video capture is from around 4:20: 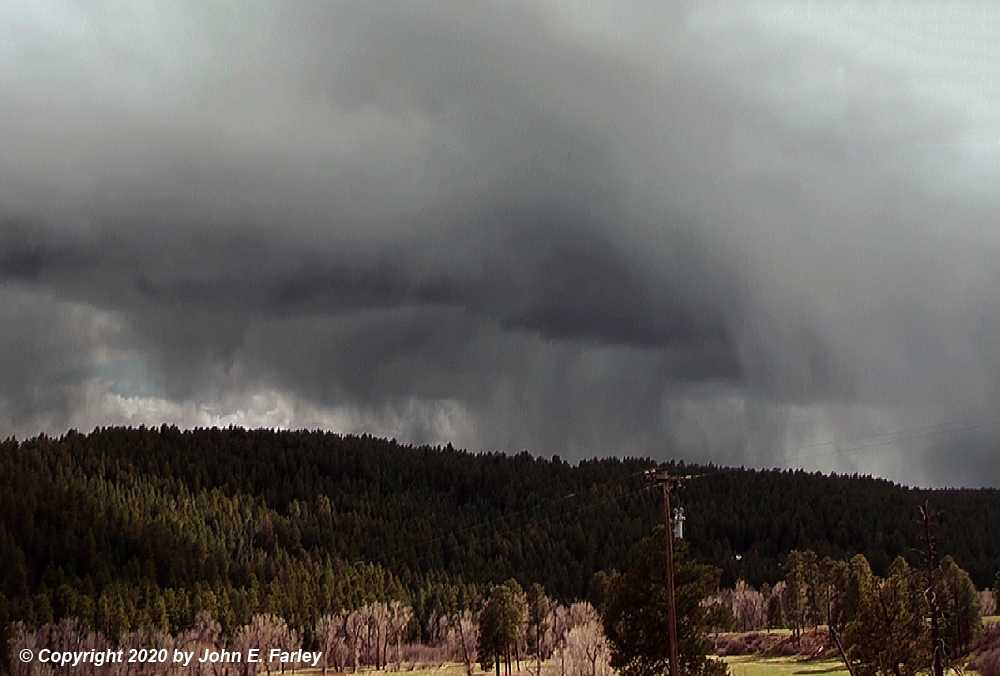 After staying ahead of the storm for around an hour as it slowly moved to the NNE, I decided I was probably high enough that the P-type would be snow or graupel, so I decided to move back toward the storm and position just ahead of it and let it move over me. Here is a picture looking SSW on 160 toward the storm around 4:40: 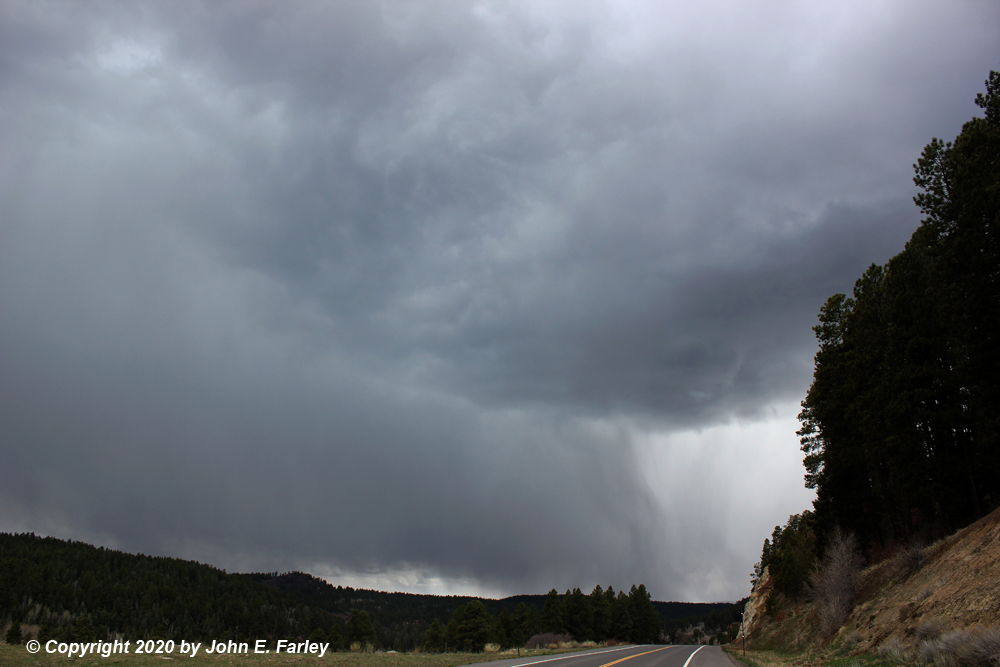 And here is a video capture from a few minutes later, just before the precipiations reached my position: 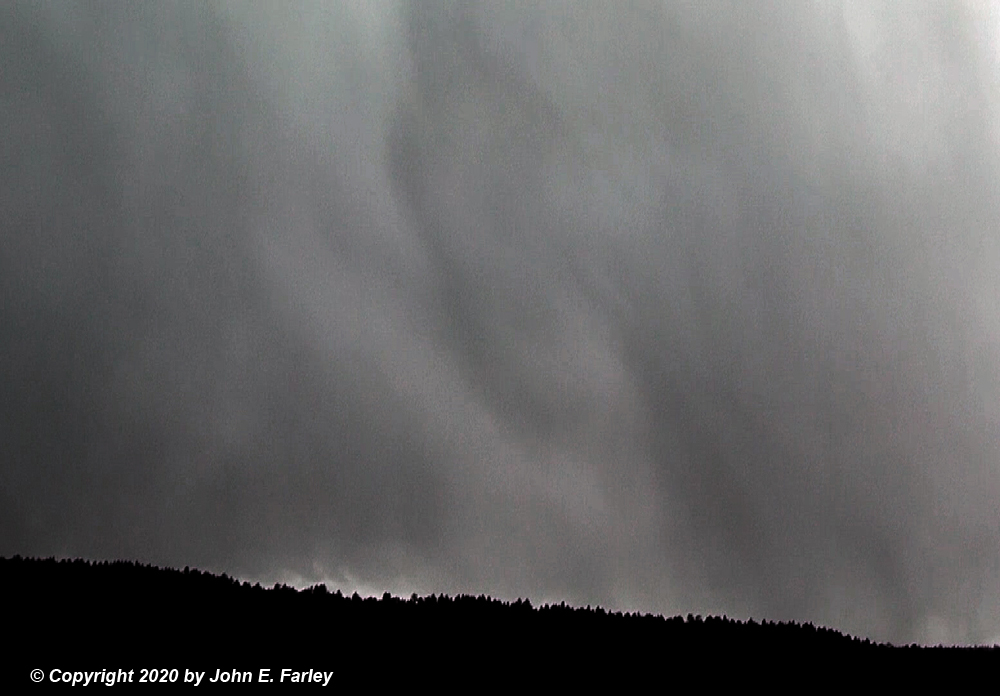 Before the main core reached me, there was a little rain, but as soon as the heavier precipitation arrived, it turned to graupel (snow pellets). At times, some of them were rather large, close to 1/4 inch, but most were smaller. I took video, hoping to get some thunder with the graupel coming down, and success! Soon I got a rumble of thunder as the graupel fell, but just one. It is on the video at the end of this report, but since that combines this scene with later snow higher up, I put it at the end. Here is a still of the graupel coming down around the time of the thunder, though: 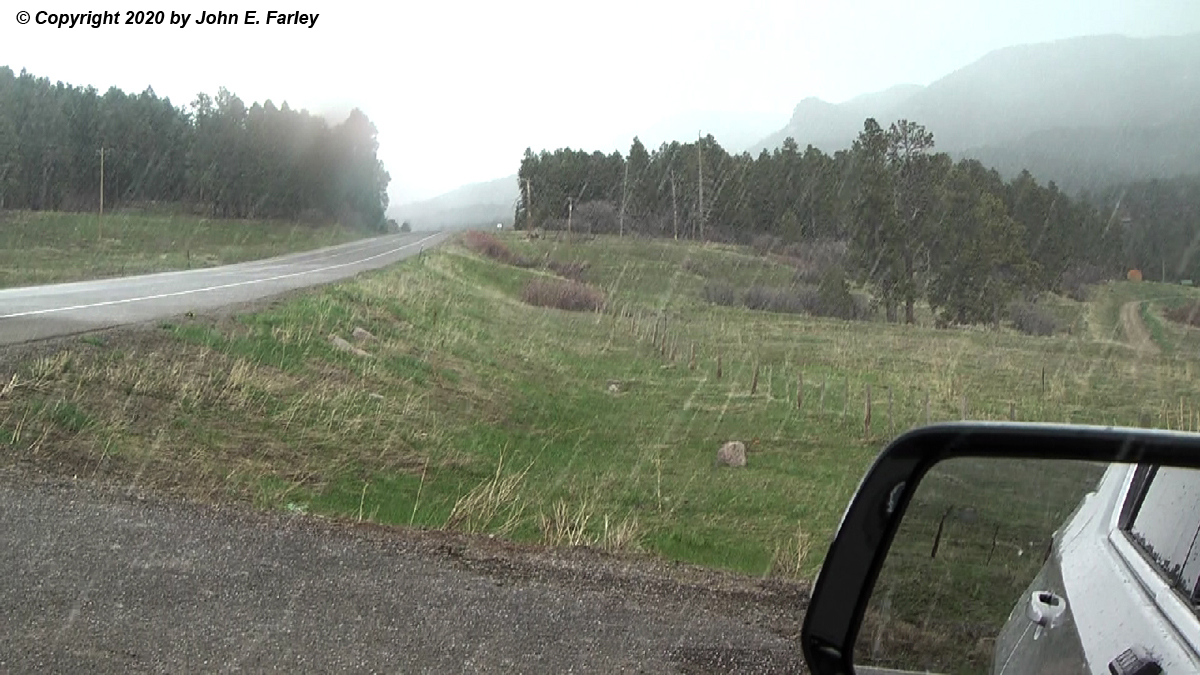 After a few minutes, as the heaviest of the precipitation passed, I moved up a few miles back into the core and stopped again near the East Fork Campground, but did not get any more thunder. During this time the temperature was fluctuating between the upper 30s and lower 40s. After a while there I decided to head up to the pass. For a short time I got northwest of the precipitation, but as the road curved back east, I quickly got back into it. The storm continued to become more elongated, and the northeastern part of it more stratiform in nature. Likely for this reason, once I got back into the precipitation it had changed form graupel to ordinary snow, and stayed that way all the way up to the Wolf Creek Ski Area, where I stopped in the parking lot to get more video. Now at times the snow came down very heavily, with about 1/3 of an inch accumulating on my car in the fifteen minutes or so that I was there sometime between 5:00 and 5:30. But no thunder. The temperature now was down to around 30. Here is a video capture of the falling snow there, probably from sometime around 5:15: 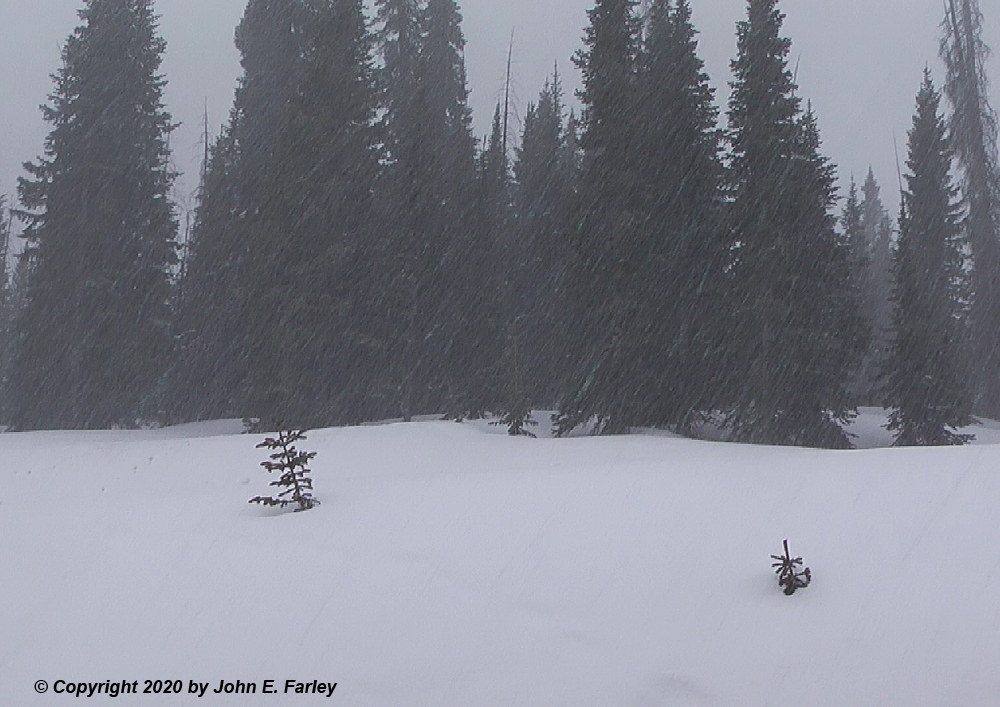 As it turns out, there was still thunder at the other end of the line of storms now far to my southwest, where new updrafts were backbuilding. This became evident once I got back down near Pagosa Springs around 6:00 p.m. I could see updraft towers to my south and southeast, and the lightning tracker was showing a number of new strikes from around the Chromo area north and northeast into the west slopes of the South San Juan Wilderness area. Here is a view of the nearest updraft tower and the anvil above it: 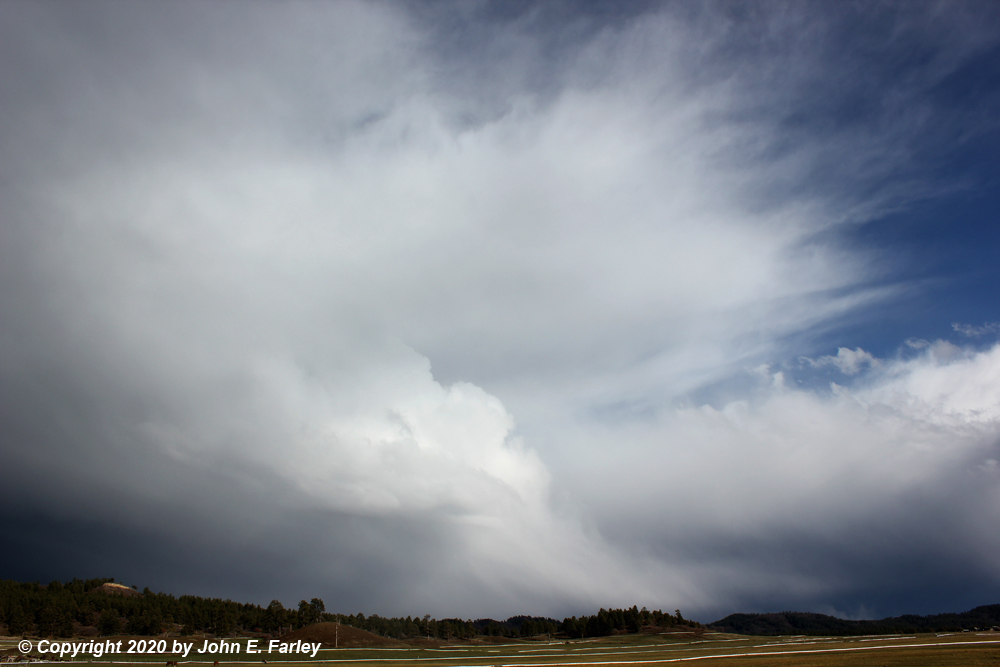 At this time, snow from the storm was blowing downslope obscuring the view from this direction of the updraft base, and the lightning tracker indicated lightning from this cell and others to its south and southwest. By this time the storm had grown upscale into a long band extending from east of Wolf Creek Pass back to the southwest through the Chromo, CO area and into New Mexico. It was a treat to view the entire evolution of this storm from a billowing cumulus south of Pagosa Springs into an isolated thunderstorm and eventually this much larger complex - and of course to catch some thunder with winter precipitation coming down.

Here is the video. It begins as the leading edge of the core is approaching, then shows the arrival of a burst of graupel (snow pellets) with a rumble of thunder. This was taken along U.S. 160 between Pagosa Springs and Treasure Falls. The video ends with a short clip of heavy snow at the Wolf Creek ski area. The video is best watched full-screen and 1080p (HD) if your internet connection allows for that.