I managed to get on one of the best storms of the day, but once I did, poor chase strategy proved costly. About 3 miles south of Hillview, IL, I intercepted the storm that produced giant 4.5 inch hail and a brief tornado near Clarksville, MO and, later, the Girard, IL tornado. Unfortunately, heading west from White Hall, IL to intercept the storm in the flats of the Illinois River proved to be a very poor and costly decision, although like most bad decisions, it seemed good at the time. Basically, what happened was the storm turned hard right, forcing me south of where I had planned to be and leaving me without a good east option. I knew the storm was turning right from the wording of the tornado warning issued for northern Greene County, but I underestimated the extent to which it was doing so, in part because the storm-motion markers on GRLevel 3 continued to show enough northeastward motion that I thought I could intercept the storm in the river flats near Hillview, then blast back east on the same road I had come on to keep up with the storm. As it turned out, however, I had to move south from Hillview because the track of the mesocyclone was taking it south of there.

The mesocyclone of the now rather HP-ish looking storm was quite impressive as it approached the flat flood plain of the Illinois River. It had a very pronounced inflow band from the northeast into the meso, with rapid cloud movement in that inflow band. Here is what the storm looked like when I intercepted it:

The picture above is a photomerge of two video captures of the mesocyclone and inflow band - even though I took a couple pictures of it also with my SLR using a wide-angle lens, it was just too big to get into one picture. A photomerge from a little earlier of two pictures taken with the wide-angle lens can be seen here; unfortunately it doesn't show the whole strucutre as well because I didn't pan quite far enough to the right to get the entire inflow band in.

After a few minutes, it was time to bail east as I was about to be overrun by the storm and knew that it had lots of hail in it and maybe a rain-wrapped tornado. Unfortunately, this is where my choice to go west from White Hall to Hillview really made me pay, since at my new location 3 miles or so south of Hillview, there was no good east option. Trying to go east from that area, the road would inevitably turn north or south or, in one case, just come to a dead end at a farm. I spent 15 or so crucial minutes roaming the hills and jungles east of the Illinois River flats, between there and route 67, and this left me behind the storm and unable to keep up, which in turn ultimately cost me a good view of the Girard tornado and any view of the Litchfield one. At one point a local spotter told me I could go north a little and pick up an east road, but as I quickly encountered a wall of horizontal rain blasting in from the west, I backed off and found another route. Probably a good choice, as golfball hail was widespread west of White Hall eastward into town, and a 75 mph gust was measured not far north of there. As it was I got hit with some hail a couple times; not sure of the size but not likely bigger than nickels.

Finally, I found an east option and jogged south on 67 to pick up route 108 and go east. I stopped briefly north of Carrolton to observe the two semi-merged supercells that were in the area - the original one I had been chasing, now to my northeast, and another one right behind it which had a TVS on the radar but probably had little chance to tornado as it was likely slightly elevated over the outflow from the first storm. So I decided to blast east on 108 and try to catch back up with the first storm - an iffy proposition due to the rapid movement of the storms and the upscale growth of the isolated storms that had developed in the St. Louis metro area and in Jersey County earlier. I gained a little on the storm as I encountered occasional bursts of rain and hail from storms developing to my south. I may have caught a couple brief views of the Girard tornado partially hidden from me in the rain, but can't say for sure. A couple times I briefly saw what looked like half of a wide cone (the other half hidden in the rain) well off in the distance to my east-northeast under the updraft of the storm that had passed me by while I was in the jungle. It was in the right general direction and about the right time, and it definitely was that storm that produced the Girard tornado, but from that distance looking through the rain it was impossible to tell with any certainty. In any case it disappeared in the rain quickly, and driving in the rain I couldn't get a picture. I also noticed what was probably the wall cloud that led to the Litchfield tornado well off to my east-southeast, on the other side of Carlinville from my position west of Carlinville, and what may have been a brief funnel before the main show. However, well before the tornado a new storm developing to my south obscured any remaining view of that storm. The new storm, too, had a decent wall cloud, but between being north of that storm and the rapid approach of the storm to my west, which by now had merged into the line, any move on that storm would have been impossible. So I decided to just stop under the roof of a closed bank drive-through in Carlinville and let the storm move over me. It did, with quite a bit of gusty wind and hail, but all of the hail was small - nothing over 1/2 inch, and mostly smaller.

Once the storm began to let up, a look at GRLevel 3 radar suggested that the activity between Carlinville and I-55 was less intense than earlier - and given the position of the line I actually might be able to get back ahead of it by blasting south on I-55. Thus began a drive for 30+ miles through heavy rain, and most of the way, hail. Most of the hail was small, but occasionally it got into the nickel to quarter category, and once, somewhere south of Litchfield, I got hit by a couple stones that may have been as large as golfballs. The rain was very heavy and the southwesterly wind very strong at times. I passed quite a bit of emergency equipment along the east frontage road north of Litchfield where the tornado there crossed I-55, but in the semi-darkness, rain, and hail could not see any damage. I exited at route 4 and finally near where it crosses route 140 I broke completely out of the precipitation. At this time the radar was showing a nice hook echo and TVS on a SVR-warned storm over central Madison County (radar image here), but the storm did not look overly impressive as I stopped to watch it northwest of Marine. It was very electrified, though, and after what may have been a weak mesocyclone passed just north of me I got hit briefly by very strong northwesterly wind (RFD?), perhaps 50-60 mph, and a possible wall cloud formed to my northeast. Around this time I heard a tornado warning based on rotation that GRLevel 3 showed to be over the northern part of St. Louis city, on the next storm down the line, so I moved to a spot between route 143 and I-70. It was getting dark now, but the frequent lightning flashes revealed another clear mesocyclone structure, with an inflow tail to its northeast and a somewhat lowered area under the meso, to my west southwest. Here is a video capture of this meso, illuminated by lightning: 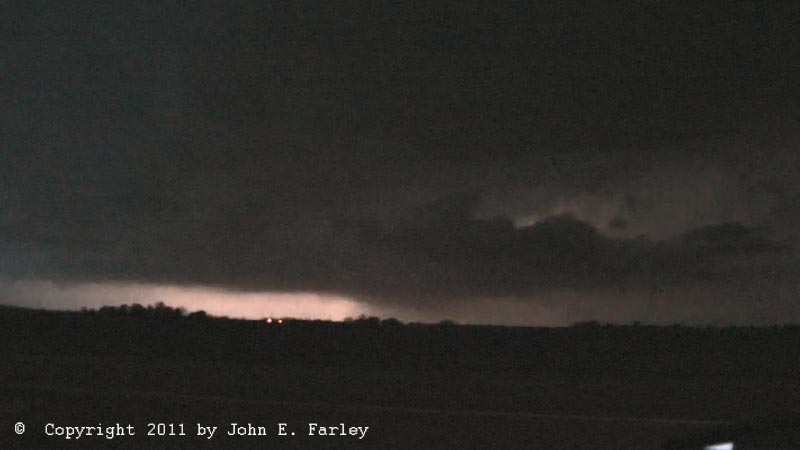 Thankfully, since this was moving toward Edwardsville, nothing came of it, and nothing came either of a meso indicated near Troy which must have passed very close to my south. But I knew it was time to get under another roof, as the core was getting close, so I parked under the roof of an abandoned gas station at route 4 and I-70 and got my best hail video of the day. Lots of wind-driven hail there between about 7:55 and 8:15, mostly pea to dime size, but a few quarters mixed in.

All in all, a difficult chase - too many storms and moving too fast to catch up after my initial error - and WAY too much driving in hail. Hail was about as widespread as I have ever seen it - must have driven in it for a total of 40 miles all told over the course of the chase. On another day, I would have considered this an OK chase, but knowing that my decision to enter the jungles west of White Hall cost me the chance to document either of two spectacular, photogenic Illinois tornadoes was painful-had I just waited at White Hall, I probably could have kept up and seen at least one of the tornadoes. I need to learn to make road network a bigger factor in my chase decisions, I think.

Here is a 4˝ minute video with the highlights of this chase, such as they were. Mostly hail, but also short clips of the mesos of the storms near Hillview and Marine:

Lessons learned from this chase:

1. Pay better attention to the road network. If there aren't multiple east options in an area, don't go there.

3. Believe it when the storm motion described in the warning tells you the storm is changing direction.

Reflectivity images, showing my position at the time of the images

Velocity images at times corresponding to the reflectivity images above

Web pages of other storm chasers who made better decisions than I did on this day:

Paul Hadfield's documentation of the Girard tornado, including some dramatic video

Reports thread for the day from Stormtrack