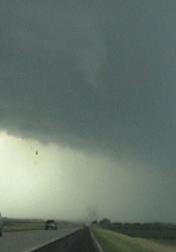 On a day much anticipated by storm chasers, I caught two very intense supercells in Carroll Co., MO, with a possible tornado crossing the road ahead of me on the first one. I'll start with the meteorological setup, then get into the details of the storm observations.

The combination of instability and wind shear predicted by the models was quite extreme over a wide area, extending from much of Winsconsin and even the Upper Peninsula of Michigan all the way back down into Oklahoma. An unusually intense low for June, around 980 mb, was moving northeast through the Dakotas, with a strong cold front extending east and southeast from it into Minnesota and Iowa, then southwestward through Kansas. Ahead of the front, and intersecting with it in southwest Iowa, was a dryline or pacific cold front which extended to the southwest through northwest MO, eastern KS, and northern OK. Wind fields with this system were extremely strong at all levels. While the system was unusually intense, there were nonetheless some downsides to it. Ahead of the main cold front in Wisconsin, eastern Iowa, and northwest Illinois, the directional shear would be better, but the rapidly-moving strong front would produce strong forcing that would proably lead to linear storms. There would be tornadoes, but they might be embedded in squall lines, bow echoes, or at least line segments, and the storms could be screaming along at 60 mph or faster. In northwest Missouri, the storms would also be moving fast, but I thought a combination of a little more capping inversion and slower front movement would lead to a better chance of discrete storms. However, although shear was strong, it looked like it would be largely unidirecitonal, with winds progged to be from the SSW at the surface, veering only a little to SW aloft. Still, with the energy-helicity index (EHI), a measure of the combined effect of instability and wind shear, predicted to be an extremely-high 5-6 in central and western MO ahead of the dryline/front by early evening, I figured this was a setup not to be passed up. I opted for the Missouri target for several reasons. First, the ones I have already mentioned above. Second, I had to set up for an art show the next day, so could not go too far. And third, a couple of the forecast models were predicting a line of storms with the tail-end somewhere near I-70 between Columbia and Kansas City, which would enhance the chance of tornadic storms in that area if this forecast verified.

By around 1:30 p.m., tornado watches were in effect in northern Minnesota and much of Wisconsin, northwest Illinois, and eastern Iowa. In addition, a line of storms had formed over NE Kansas, and SPC issued a Mesoscale Discussion indicating the likelihood of a tornado watch soon in northwest MO. I had been leaning toward sitting this setup out because of the art show the next day, but between this and the predicted EHI of 5-6 in the area of interest, I decided this one was too good to sit out. I put the gear in the car, and was on the way at 1:55, about the time, as I would find out later, that a tornado watch was issued for much of western and northern MO.

My original target was along I-70 between Columbia and Kansas City, where the tail-end of the line of storms was predicted by the models to be. However, a wifi check on my new laptop (worked great!) around 4:15 p.m. in Columbia, MO told me I needed to head northwest toward Chillicothe - the storms were linear in the KC area and making no eastward progress, but were splitting apart into individual cells up the line toward Chillicothe. In the end, I didn't have to go quite that far, but that was definitely the right direction!

The first storm I intercepted was a classic supercell, which I got on 4 or 5 miles south of Carrollton, MO on U.S. 65 around 5:40 p.m. The storm was SVR warned, and as I approached it fron the southeast, it had great supercell structure. But since it was racing along at 50 mph, I was not sure I could reach it before it crossed U.S. 65 and would race away out of my reach. This was particularly an issue because, just past Marshall, route 65 jogs west for a while. However, after it turned back north at Waverly and crossed the Missouri River, I found myself in perfect position. The storm went TOR warned around the time it produced the first of 3 big dust clouds I would see under its updraft area. I was pretty sure at the time that the first one, to my WNW, was associated with RFD downbursts, although there certainly could have been a gustnado in it - it was just a little too far away to tell. Here is a picture of the first dust cloud: 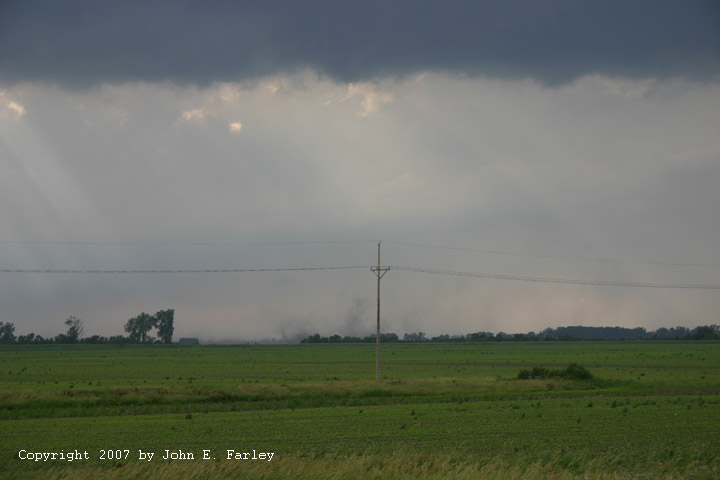 The second one of these, which was under a small lowering, crossed the road about a mile (just a guess; could have been somewhat more than that) to my north, bringing traffic to a stop. This was just before 6 p.m. At the time, I thought this one was all outflow-related, but now that I have reviewed my video, I am much more bullish on the idea that it may indeed have been a tornado. As I mentioned, there is a lowering above it, and the video shows that there is some rotation associated with the lowering and that the lowering appears to at least briefly form into a funnel cloud. I cannot tell from the video if the dust crossing the road a mile or so ahead of me is rotating, but the nearly-vertical sides of the dust cloud suggest that it could well be. Hence, I think there is a very good chance that this could have been a tornado, but I cannot say so for sure. Here is a video still of the lowering and the dust cloud as it crossed the road: 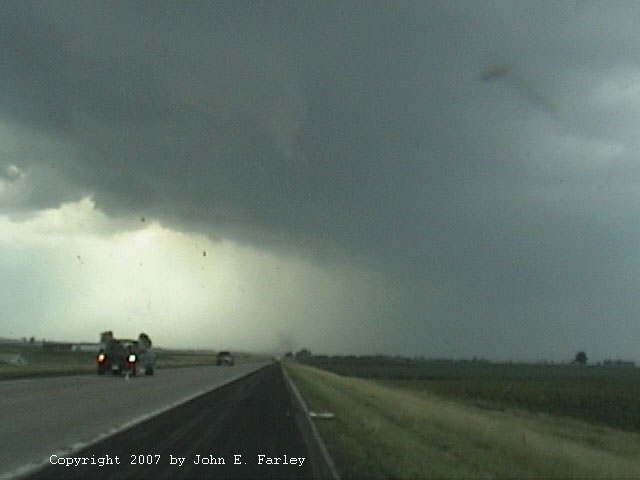 Another video capture, a few seconds later, can be seen here

If you want to take a look and see for yourself what you think this was, you can look at my video on Youtube here.

This either dissipated or I lost it in the worsening contrast after it crossed the road, but a couple minutes later off to my northeast I could see a third large dust cloud which persisted for 2 or 3 minutes. There was a lowering - I'd call it a wall cloud - above this dust cloud, but it was too far away and the contrast too poor to ascertain rotation. All three dust clouds were pretty much along the same line extending from WSW to ENE. Also noticeable was very frequent CG lightning in the core just before these dust clouds blew up, and as you can see in the video, there was still quite a bit of that going on at the time of the possible tornado/second dust cloud.

This storm produced estimated 80 mph winds and golfball hail in Bogard in Carroll Co. (about 9 miles north of my location) at 5:55 p.m., around the time of or just before the possible tornado I saw. Earlier, at 5:33, it produced 75 mph winds to my west in Norbonne, and later, around 6:18, it produced winds estimated over 80 mph and 2-inch hail one county to my east, just southwest of Triplett in Chariton Co. Because the storm was moving 50 mph, I figured I could never keep up with it, so I did not try to. Instead, I decided to wait for the next storm I could already see approaching off to my WSW. I decided to drop back south a little and poke west from Waverly on route 24. A couple miles west of there, I heard a new SVR warning for this next storm, with radar indicating the storm near Richmond moving toward Carrollton. So, I turned around and headed back north from Waverly on route 65 again, ending up only about a mile or so south of where I had viewed the previous storm.

I could soon see that this second storm was a truly mean-looking high-precipitation (HP) supercell storm, with a big, dark, low wall cloud with an inflow tail to the NE. As the storm got closer, I could see that behind the wall cloud were very pronounced vertical shafts of rain and hail - this was around 6:40.

Here is a picture taken shortly after I stopped along route 65 about 5 miles south of Carrollton to view the storm: 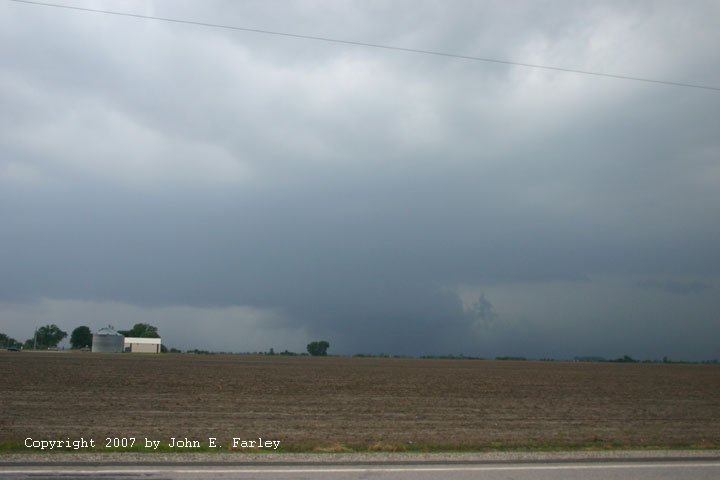 Here is another picture as the storm got closer, showing the rain and hail shafts behind the wall cloud: 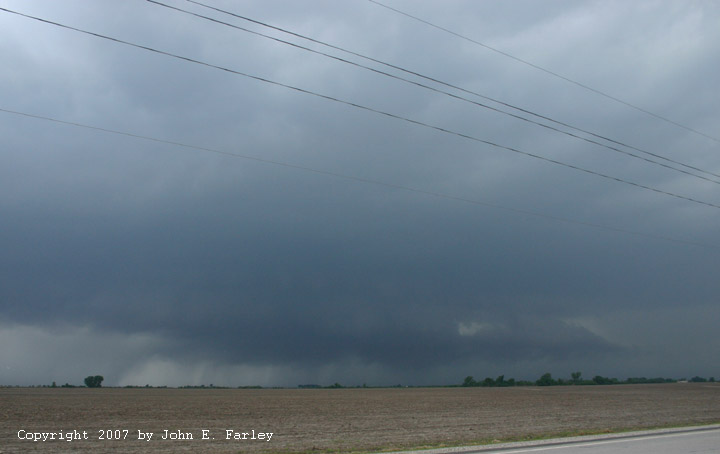 I also got some video as the wall cloud approached, with occasional CG lightning around and, at least once, ahead of it. This video can be seen here.

A video still, showing the wall cloud, inflow tail, and CG lightning, can be seen here.

After this storm passed, I followed it back toward the east, stopping to watch for a while at the north edge of Malta Bend. But it was racing to the east, and I needed a pit stop, both for myself and the car, badly, so I dropped back to Marshall and took care of that, then headed north from there to intercept the next storm down the line, which had now also gone SVR-warned. But by this time, with the storms training repeatedly over the same areas, the atmosphere was getting a little too worked-over, and the storms weakened. The chase was over, but it was one of my best this year, so I was very glad that I did decide to head out!

This was a surprisingly easy chase given that the storms were moving 50 mph, because they kept training over the same areas, from the WSW to the ENE. Although it was about 45 minutes later, and I did move around some in between, I ended up watching the second supercell from within a mile or so of the spot from which I watched the first one. I could have just stayed there! Both storms seemed to reach peak intensity as they moved near route 65 in Carroll Co. I am not sure why this peaking of intensity, which radar loops confirm, occurred exactly in the perfect place for me to watch the storms, but I am glad it did! I do think that the repeated motion of the storms over the same area occurred because the dryline pretty much stalled for several hours, until, after dark, the stronger front behind it finally caught up to it and pushed the line of storms to the southeast.

Here are a couple radar images. In both, the strongest storm, located roughly between COJ and SZL, each in about the same location, is the one I was on:

5:59 p.m. - This would likely have been just after the possible tornado crossed the road ahead of me.

6:58 p.m. - Second supercell, the HP one, probably just after I retreated from the approaching storm.