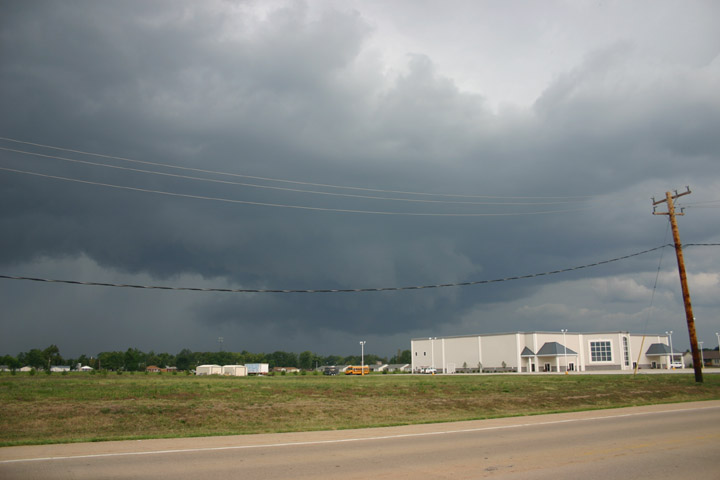 I caught a rather impressive-looking severe storm today without ever getting more than 15 miles from home. As an outflow boundary from earlier convenction ahead of a cold front approached the St. Louis area from the northwest, it entered an area of quite unstable air (CAPE around 2000), with strong low and mid-level wind fields - mainly unidirectional from the southwest. SPC had the area in a moderate risk, and as storms approached the area from the WSW, it was clear to me that I would have the luxury of watching radar as the storms approached, then heading out a short distance to catch a storm that looked good on radar as it approached the STL area. By around 2:30, I was focused on an intense storm that had popped up in St. Charles County, MO, and decided that would be my storm since it was looking good and would be easy to intercept in northern Madison Co., IL. I left shortly after 2:30, and by the time I had the weather radio on, the storm had gone SVR warned (for northeastern St. Charles Co. and northeastern St. Louis Co. in MO and northwestern Madison Co. in Illinois) as it produced up to one-inch hail in St. Charles County.

I decided that since the storm was already severe, it made sense to intercept it ASAP, so rather than heading north on route 159 to the border of Madison and Macoupin Counties, as I had originally considered, I turned west on route 140 to interecept the storm near Bethalto, IL. I ended up watching the storm from the northeast edge of Bethalto, managing to find a spot with an open view of the storm. The storm had an HP-ish look as it passed just northwest of Bethalto. Around the time this video capture was taken, the storm produced wind damage in Fosterburg, a few miles to my northwest, as it had done earlier in Alton and in northern St. Louis County, MO. The damage consisted mainly of downed trees and power lines; one downed tree ended up on the home of the mayor of Alton.

Just before the video capture above, the storm produced an intense CG about a half a mile away just as I began to videotape the lowered area. Here is a video capture showing this bolt. The intensity of the bolt blew out the image somewhat, but I decided to post it anyway because it shows how intense the bolt was. This video capture shows a second CG that occurred a split second later in the same general area - there were at least 3. The video linked below shows the lightning, along with other features of the storm. The opening photo above shows the storm just after the three video captures linked in this paragraph and the proceeding one. As can be seen in this photo and the video captures, there was a lowering under what seemed to be an HP meso, and indeed some rotation had been observed by radar in the storm, though not enough to issue a TOR warning. I would say the lowering was somewhat of a hybrid between a wall cloud and shelf cloud, though the storm seemed to be getting more outflow dominant. It was moving fast, around 40 mph, and shortly after I got the pics linked above, it was time to move east.

I blasted east on route 140, next stopping to view the storm on route 159 just north of 140. By this time, the storm was clearly gusting out. I watched and took video as the storm produced more lightning (but farther away now) and the outflow sent corn shucks flying in the air from the cornfields along route 159. Shortly later, the show was over, and I turned my attention to strengthening storms farther down the line to the southwest. The next severe storm was too far south to intercept, but I did observe some intense CG as I drove through rain from the next cell returning to Edwardsville.

A two-minute Youtube video showing the lightning strike, the movement of the storm as viewed from Bethalto, and the corn shucks blowing in the air near the intersection of routes 140 and 159 can be seen here.