In the early afternoon of March 21, a cluster of strong thunderstorms developed near Shiprock in far northwest New Mexico, and tracked northeast over Farmington, NM, Navajo Lake, and on into Colorado over Chimney Rock National Monument, Pagosa Junction, Pagosa Springs, and northeastward into the San Juan Mountains. These storms were associated with the last in a series of shortwaves rotating around a strong storm system that the previous day, after producing heavy snow from southwest to northeast Colorado, had ejected into the Great Plains. With this shortwave, there was good speed shear in the wind fields, and some instability once the surface heated a little with the afternoon sun. The storms were strong and very electrified from their initiation near Shiprock on. A total of four special weather statements were issued for this cluster of storms, three from the NWS in Albuquerque and one from the NWS in Grand Junction, CO - all for hail and wind. Shortly after the storms initiated, there was even a report of a landspout tornado southwest of Farmington, NM, around 2:30 p.m. By the time the storms reached the higher terrain of Colorado, from the area around Chimney Rock National Monument northeastward, the main precipitation type was snow. This was the case from around elevation 6500 up, with accumulating snow above about 7000 feet, including in the Pagosa Springs area.

Knowing that conditions were favorable for thunderstorms and figuring that the precipitation type with them could be snow, I was watching the weather closely, and was tracking the storms online with radar and the lightning tracker from around 2 p.m. when the storms were developing near Shiprock. I figured it would be a good setup for thundersnow, though I must say the storms ended up considerably exceeding my expectations. By shortly after 3:30, as the radar showed the storms approaching Navajo Lake, I figured it was time to head out for an intercept near Chimney Rock National Monument. Now as things turn out, I might have done just as well wating for the storms to come to me in Pagosa Springs, but I am not that patient, LOL, and was a little concerned that the storms could end up going through the hilly, wooded, and largely roadless area south of Pagosa Springs. At least if I headed toward and perhaps past Chimney Rock, I would probably have a decent view of them. So I loaded up the cameras, and on the way out of town stopped at a spot with a good southwestward view along Vista Road at the SW edge of the Pagosa Springs area. Looking southwest, this was my first view of the storms: 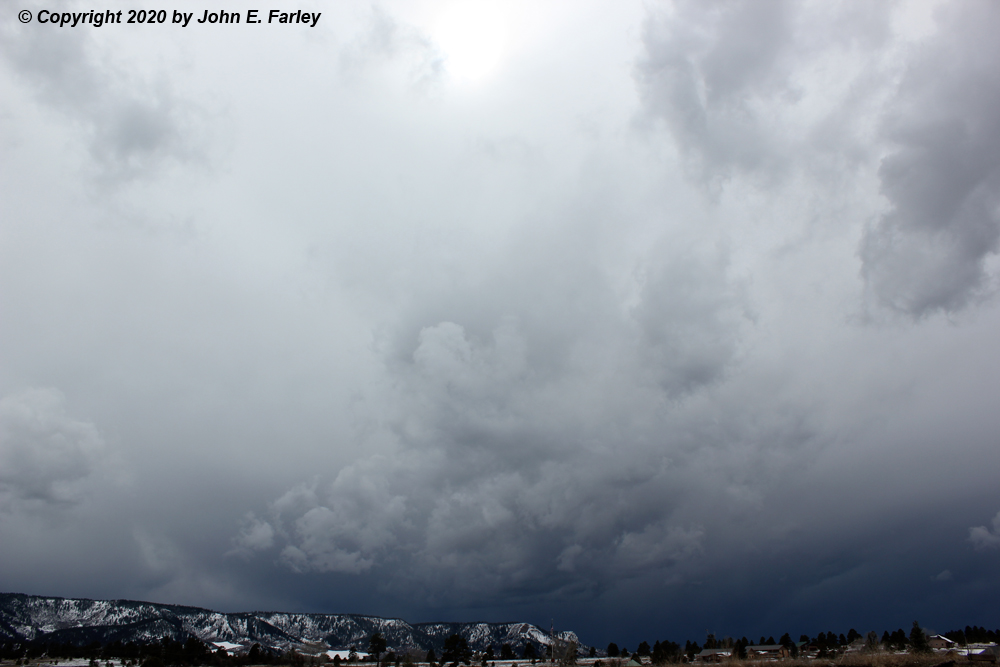 Here is a more zoomed photo that shows the storm structure better: 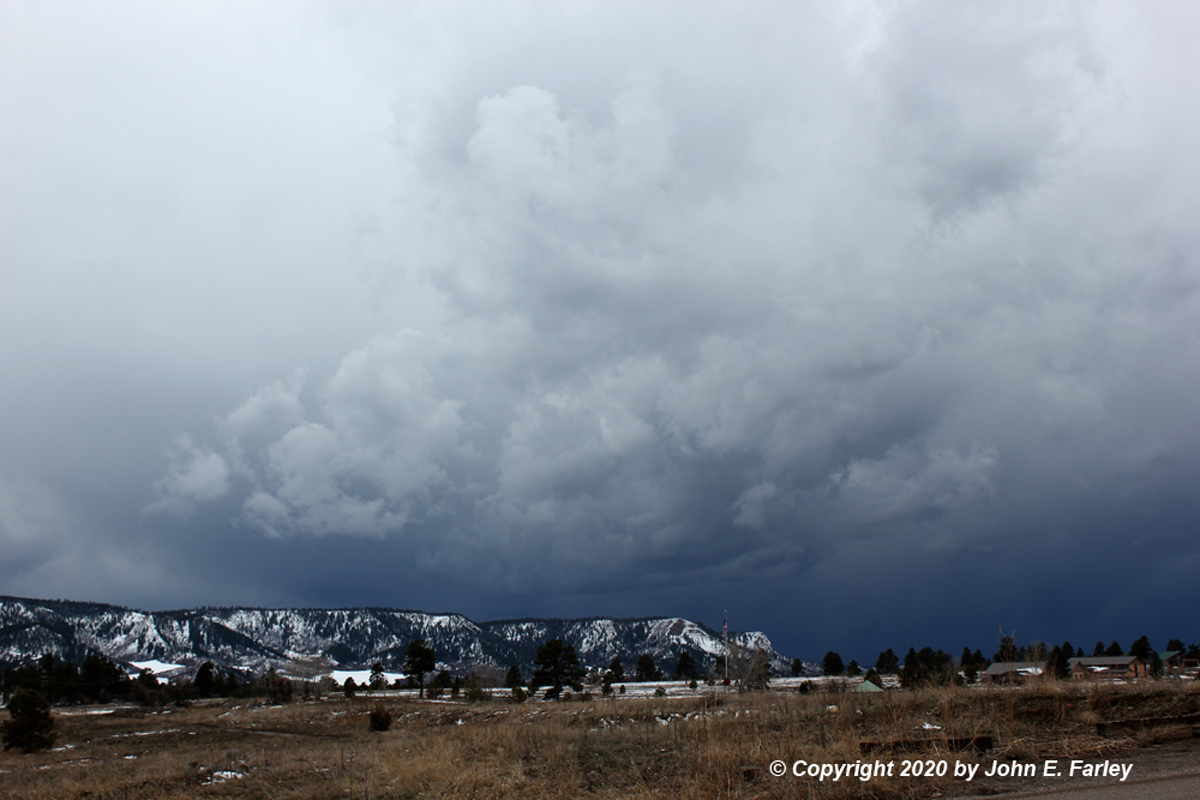 These pictures were taken around 3:50 p.m. From this viewpoint, the convective nature of these cells was obvious, and it also appeared that the main precipitation type coming out of the base was snow or snow pellets (graupel), although in the lower elevations the snow falling from the clouds may have been melting to rain before reaching the ground. But I figured that at elevations like those in the valley below Chimney Rock and in higher locations, it would be mainly snow. Game on!

By a little after 4 p.m., I reached a good stopping point along route 160 a mile or so before the turnoff on state route 151 to Chimney Rock National Monument and Navajo Lake. The storm was not far on the other side of Chimney Rock, and as I stopped and watched, there was a rumble of still fairly-distant thunder. This was the view at that time: 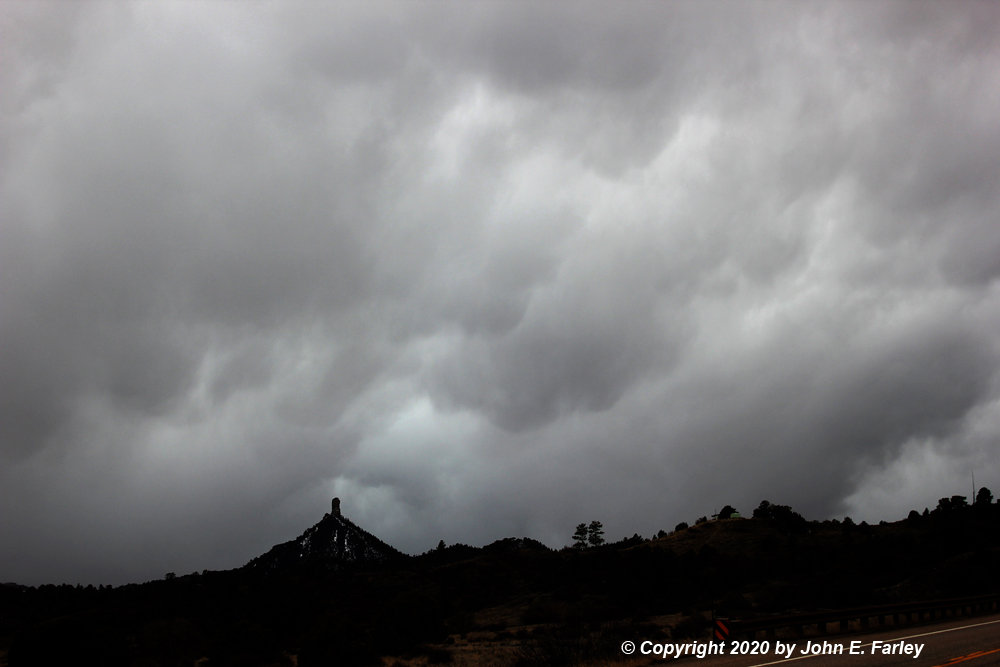 These mammatus-like features were very low, and visibly moving along. And the precipitation was not far behind. I was hoping perhaps to get a shot of lightning over or maybe even striking Chimney Rock, but while I was in this spot, that did not happen. As the ridgelines south of Chimney Rock started to disappear in the advancing precipitation, I decided to head down 151 to the entrance to Chimney Rock, hoping to get some thundersnow. By the time I got there, occasional flashes of lightning were visible and thunder had become frequent. At first it was rain, but that quickly began to mix with partly-melted snow pellets. Then, a flash of lightning and a crack of thunder. Thundersnow! OK, at that point, mixed with rain, but the changeover to mostly snow occured fairly quickly. I could see that the precipitation was heavier a mile or so south, so I moved about that distance and stopped again. By now it was mostly snow with a little rain mixed in. The snow was a mix of snow pellets (graupel) and ordinary snow. Almost as soon as I again began getting video, there was a streak of lightning overhead that I managed to catch on video, and a second later, a loud crack of thunder. So some part of this bolt was within a thousand feet of my location. Here is a video capture of this lightning: 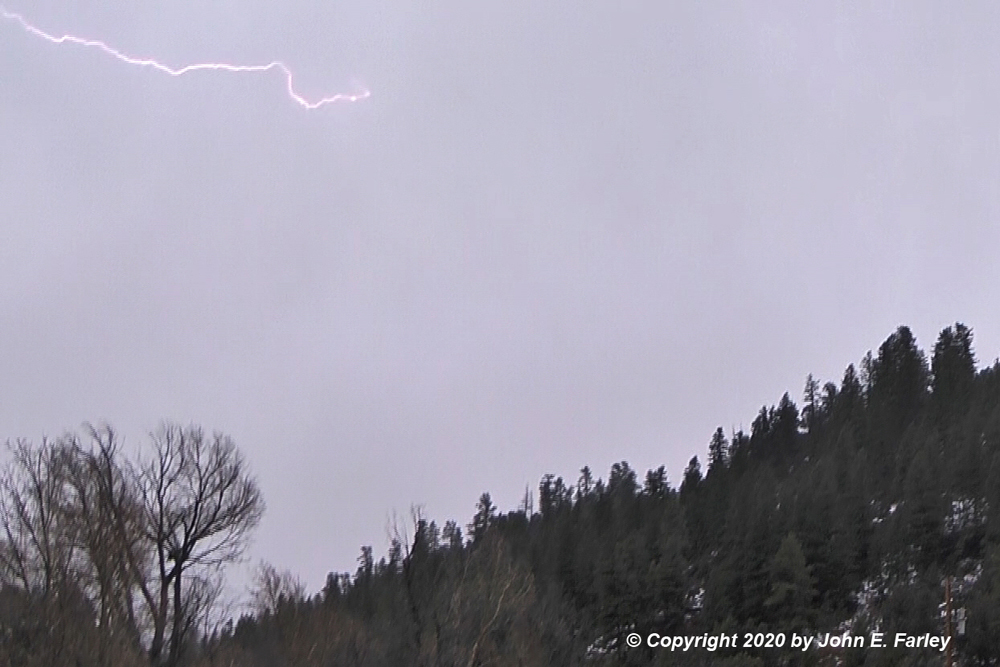 Now the lightning came in occasional bursts of 3 or so flashes a minute, and the thunder during these bursts was nearly continuous. The precipitation type went gradually to all snow (though still a mix of ordinary snow and graupel). The frequency of the lightning was about as high as I have ever seen in a storm where the precipitation type was mainly snow. After sitting there and getting amazing video for a while, I was concerned that if I stayed any longer, the storm might get ahead of me. So I decided to head back up to route 160, to head eventually back to Pagosa to stay with the storm. But when I got back to the intersection of 151 and 160, which is at a slightly higher elevation than where I had been, I decided to stop again. It was all ordinary snow now, and there was still lightning and thunder. So I got some more video. I saw a streak of lightning cross the sky above me, with thunder a second or less later. I did not get the actual bolt on video, but did get the flash and the nearly instand thunder. I did not stay there too long, though, because the traffic on 160 was noisy and I did not want to let the storm get ahead. So I headed back northeast toward Pagosa Springs in what was a very eerie drive. By now the snow was coming down very heavily and although it was not yet accumulating on the road because the temperature was still around 35 and the ground fairly warm, the visibility was poor. And every now and then, there was a bright flash of lightning, followed quickly by thunder so loud that I could hear it in the car while driving. By around 5 p.m., I was back at the west edge of Pagosa Springs, stopping at the parking lot for Veterans Memorial Park, very near the spot where I had taken the first pictures of the storm in the distance. Snow was still coming down heavily, and now accumulating on the ground. There was even a little slush on 160 the last mile or so before I reached Vista Road. Most of the thunder was not quite as loud now as the storm continued moving off to the-northeast, but I got a half-dozen or so rumbles as the snow continued to fall heavily. And one bright flash of lightning - no bolt visible, and it was a mile or so away, not as close as some of the others. But the refraction of its light through the heavy snow gave it, and the falling snow, an unusual pinkish-purple color. Here is a video capture: 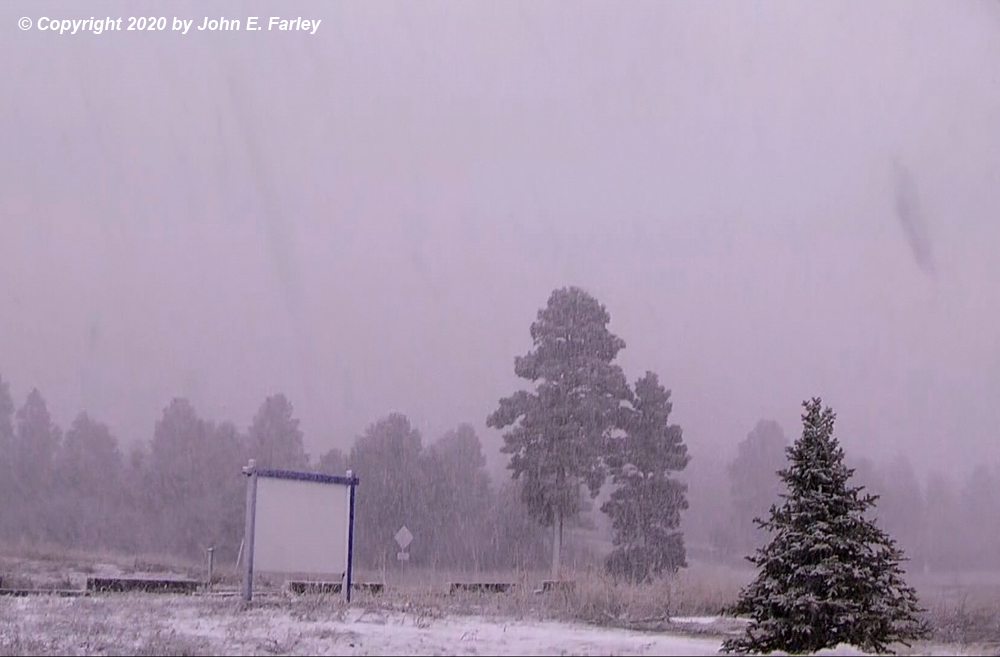 Afte a while in this spot, I decided to head home, as the frequency of the thunder and lightning was decreasing. From this location to my house a mile or so away, there was about a half inch of fresh snow that had fallen, though on the road it was slushy and melting in places. When I got home I took some more video from my garage. Although I did hear a couple rumbles of thunder after I got home but before I set up for more video, I did not get any more on video. But, wow! On the edited video linked below, there are more than two dozen cracks or rumbles of thunder in the 8 minutes of video, and numerous visible lightning flashes - all with snow falling. One of the most electrified snowstorms I have ever seen! Here is the video (best watched full-screen), starting at the entrance to Chimney Rock National Monument, then, in following segments, a mile or so south of there, north of there at the intersection of 160 and 151, and then back in Pagosa at Veterans Memorai Park:

If you do not want to watch the full video above, I also made a shorter highlights clip for social media (about 3 minutes). You can access that shorter video clip (again, best watched full-screen) here:

I also captured images from the lightning tracker to document the amount of lightning, and from radar. Here are these images: 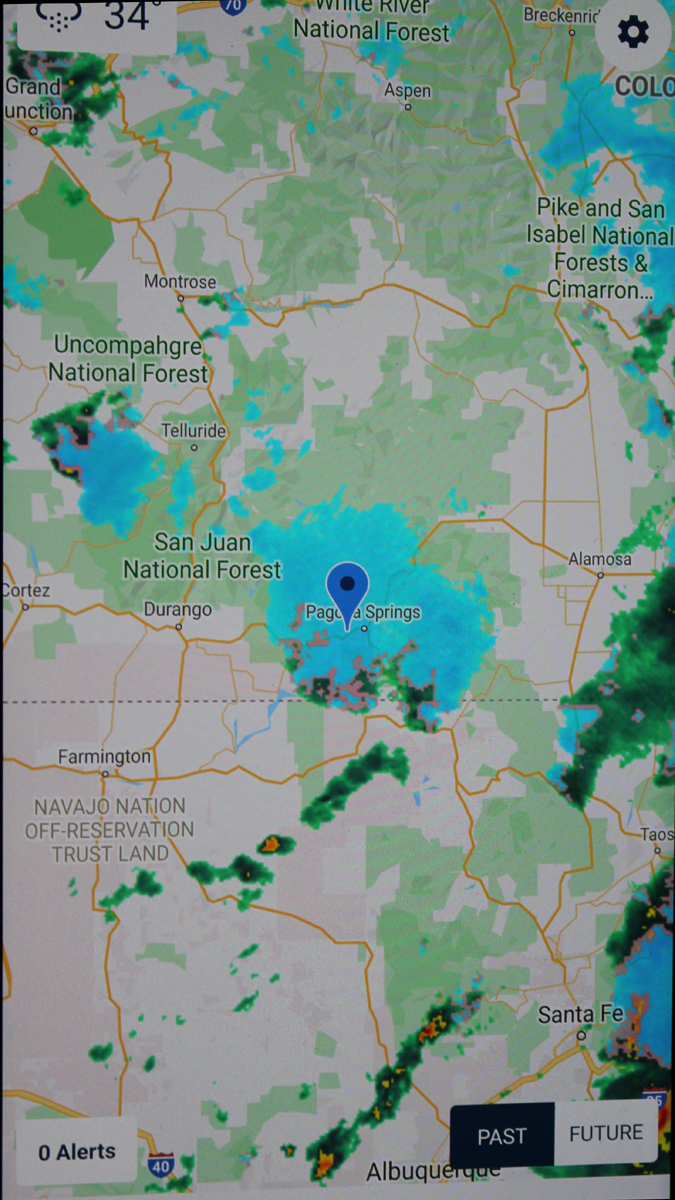 Note the numerous strikes all around the Pagosa Springs area. In most of this area the main precipitation type with this storm was snow - that is a lot of strikes for a snowstorm! Also, usually snow does not even show up on the radar over Pagosa Springs because the two nearest radar sites, Albuquerque and Grand Junction, are both quite distant, and also the beam is partially blocked by the mountains. You can see summer thunderstorms, but usually not winter snowstorms over the immediate Pagosa area. But in this case the snow clearly shows up, indicating that this storm was higher-topped than most of the snowstorms in this area - another indicator of the intensity of the storm.

IMPORTANT NOTE: In light of the need for social distancing during the COVID-19 pandemic, I would like to stress that during my observations of this storm I ventured no farther than about 20 miles from home and had zero interaction with any other people. So no transmission risk to myself or anyone else.